undo is controlled in tools>options>general

Subd and mesh will converge as Subd develops. I’d assume that as these needs become apparent there will be more crossover.

can you clarify what you as asking for here?

more detail? when and why would you use this?

more detail? when and why would you use this?

you can just physically move them as needed (or use a named position) …how would this be different?

undo is controlled in tools>options>general

Not yet - it works for SubDs, but doesn’t translate to meshes. Select faces from a mesh cube, use SubDFaceEdgeVertex toggle. It does nothing (as expected, it’s a mesh and not a SubD).

Morph Controls / control objects are what’s created when you run Cage Edit. I had some visibility issues trying to see a control which was a curve, and realised BringToFront doesn’t apply to this object type, it seems.

BringInFrontOf - select a source, select a target to bring in front of.

If you have quite a few objects, then rather than running BringForward repeatedely, it seems logical to be able to select the ‘thing’ you want to BringInFront of. Maybe it will be one to try and script instead. 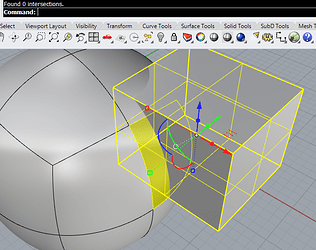 if you prepick it fails…

if you post pick the same objects it works- this is a bug. will write it up!

Thanks Kyle. The point Tim makes about CollapseMeshVertex seems reasonable, that it wouldn’t be worthwhile if it made the command unstable.