New to Rhino coming from AutoCad. I was wondering is there a command to differentiate a single line to a line with nurbs or a line with a vertex. I have attached an example. When using the SelOpenCrv, both of the lines become highlighted, is there another command that can be used instead.

Also when exporting a file created in rhino to a dxf, certain lines showed they had a vertexes although the properties shown in the rhino tab show the line is a normal curve. could there be an explanation for this? Using F10 to show points on the line brought nothing up.

This is a bit geeky, but I think it’s the information you’re looking for:

Non-Uniform Rational B-Splines, are mathematical representations of 3D geometry that can accurately describe any shape.

This is good too:

Degree of Curves: Is there any good tutorials? Rhino for Windows

@scottd @John_Brock Thank you both! I’ll have a look through it. Thanks again!

If you run SimplifyCrv on your geometry before exporting, any line-like curves like your degree-1 NURBS line segment will be converted to line objects. You also have an option to do that automatically (within a given tolerance) in the DXF/DWG export options scheme. 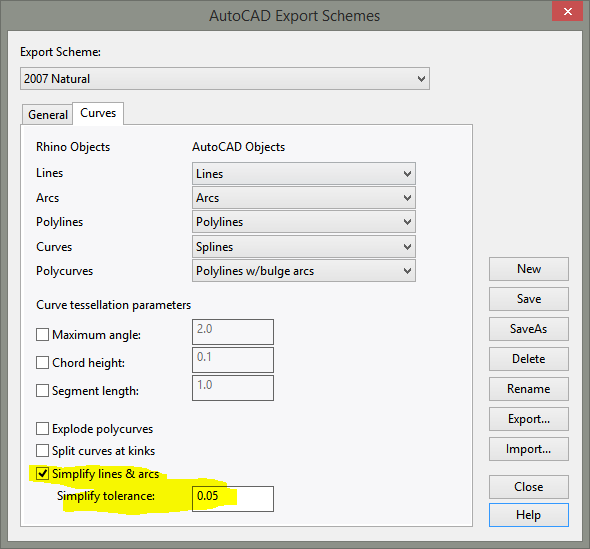 Thank you for your responses, currently waiting on feedback from colleagues if the applied changes worked.