Setting up an IK chain for a gas lift

I’m trying to make a gas lift work in Bongo but can’t find any tutorials that show how to deal with the shaft sliding in the cylinder housing (while the housing itself is moving due to the movement of the gas lift’s top following a circular path. Beside this, my gas lift is part of a moving assembly, complicating things further.

Shown on the image below, the moving assembly: 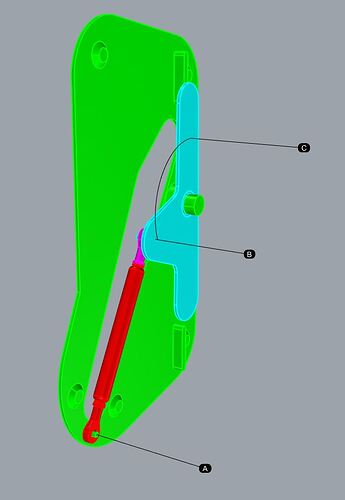 The full assembly as shown moves vertically along a straight line.

The gas lift, consisting of a lower part (the cylinder) in red, and an upper part (the shaft) in magenta.

The head of the lower part is connected to the part in green (point A), which -as mentioned- moves up an down, and so the “end” or “goal” of the gas lift’s IK chain is not fixed in space.

The normal setup of an IK chain is a string of parents - children between the driver (at the top of the chain) and the goal (at the bottom).

The problem is that when I place my goal (a point I call IK goal) at the bottom of this chain hierarchy, it is also rotating along with the blue part, and so both driver and goal rotate along the same trajectory, and there’s nothing to drive the expansion of the gas lift.

Here’s an image showing where the goal sits higher up in the hierarchy and not at the bottom as would be normal. Placing it lower, below the Lever arm (depicted in blue), would make the goal rotate the same way as the driver. 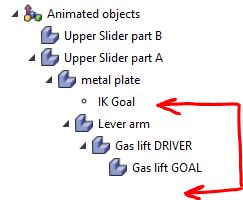 OK, I found the solution in the excavator file at the bottom of this page:

Seems like there was no IK chain needed in the first place, just “look at” constraints