I was starting to build the iwatch just for fun and for learning, but i have some trouble to build an radius on this little edge. Are there any suggestions ?? I upload a pic that you can see the what im are talking about.
Hope for Help. Cheers Phil

attached, you’re going to have to merge the radius surfaces (untrim + mergesrf) as in the file otherwise fillets will fail.

You could do it with pipe around the edge and split + run blendsrf if you don’t mind a messy surface but I suggest merging instead.

Hello - you’ll need to work your way around using FilletSrf here - the reason is that there are surfaces in the area of those edges that are smaller than the fillet radius - say .5, and Rhino cannot jump across these faces in FilletEdge, so FilletSrf is the thing because you can tell it which surfaces you want to fillet - it does not care about the edges. It’s a bit more work but clean.

(Vladimir’s suggestion to merge the tangent surfaces in the cutout may also work - use MergeSrf with Smooth=No… but I prefer to leave tangent faces as separate, myself - curvature discontinuous surfaces can cause problems)

Yes, I just don’t trust filletsrf in many of these cases as the trim boundary can fail, happens mostly with quick and dirty geometry though.

Thanks a lot! I really worked out and learned already something in rhino!!
But i dont get the work way fom Vladmir :(.

Anyway thx for the fast answer!!

Then trim the surface back into the main object again. One complication there is that you’d also need to do this with some of the outer faces as well - the idea would be to make single surfaces where there are split up surfaces that cause the problem I described above when they are smaller than the fillet radius like this:

No need to curve trim the boundary.

Rhino cannot jump across these faces in FilletEdge

When I try to recreate this, using your file, and do the MergeSrf command, not happens and the commandline shows “edges are too far apart for merge”. What am I doing wrong?

Aha! Thanks. I didn’t notice that bend was not untrimmed yet. Now it works!

Rhino cannot jump across these faces in FilletEdge

FillerSrf should be able to make all the fillets in a sequence of fillets like this with just 2 clicks. When one fillet in the sequence is defined all the other fillets are defined. Its ridiculous that the user is expected to be so much smarter than the developers and the user is expected to know where to put each fillet in the sequence, but its way too much to expect the developers to have the same grasp of how things work.

Filletsrf makes better quality surfaces most of the time. Its not just that trim boundaries are more accurate the surfaces that are made with filletedge often have poor tangent continuity which means that when you try to add more fillets on top of existing ones that may fail.

The geometry situation seems to be pretty obvious and simple.
In fact, it is not.
It is a great difference to see something, or to code something.
The developers are not stupid or lazy.

I don’t know if it is possible at all to solve those situations with a surface modeller.
With a solid modeller, it should be less problematic.

But again, Rhino should handle situations like this smarter.

The geometry situation seems to be pretty obvious and simple.

In fact it is extremely simple and obvious.

After the user has made two clicks defining the first fillet the location of where the user must click next is completely known.

A rolling ball fillet always ends at a surface edge. If there is another surface at this edge point that has the same surface normals that is all the information that is needed for Rhino to make the next filletsrf in the sequence. The same thing for the next fillet and the next all the way around.

Rhino can make rolling ball fillets as good or better than any solid modeller. The problem is that to get those excellent fillets the user has to do all the tedious repetitive work that should be done by the computer. And that is only because no development time has ever been devoted to automating those repetitive tasks.

I don’t know if it is possible at all to solve those situations with a surface modeller.
With a solid modeller, it should be less problematic.

That statement is completely wrong. It is much easier to do this on a surface to surface basis. The only reason there has been no progress in filleting in Rhino is exactly because there has been zero effort put into doing the very simple and obvious things that would make Filletsrf a very powerful tool.

I don’t know if it is possible at all to solve those situations with a surface modeller.

With a solid modeller, it should be less problematic.

What’s the difference for a solid modeler? I can import the Rhino model and fillet that edge with Fusion and Fusion has no problem with surfaces being consumed by the fillet, in this situation Fusion has no more information than Rhino. 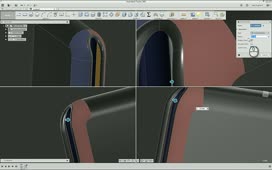 That’s really nice actually, I just don’t like fusion for anything except this I guess.

I started using Fusion for the exact opposite, it’s ability to remove fillets from imported models! I make injection moulds and used to spend hours removing features from customer supplied models, I decided the $300.00 a year was worth it just for that.