Hey. I am trying to install rhino 4 before I install my Rhino 5 update. But when I install rhino 4 and try to update to SP9 the computer tells me that SP9 is already installed, and it’s not. Hence I can’t install Rhino 5 or Flamingo. Any tips?

Hi
You’ve made some incorrect assumptions and as a result started down the wrong path.

I’ll read between the lines and assume what you really want to accomplish is to install Rhino V5.

You do not need Rhino v4 installed.
Uninstall it.
Download a fresh installer for Rhino V5 from the Download page on the Rhino Web site.
Run it.
After you enter your V5 upgrade key code, the V5 installer will ask you to enter a key code from your previous (V4) Rhino.

Don’t use old product CDs/DVDs. Use a Sharpie to write on them to download a current installer if you need to reinstall them.

That should get you sorted.

I am trying to install Rhino V4 after the trial version of V5, I am waiting for the V6 output, and I followed the steps mentioned in the previous post.
I uninstalled the V4 from my old computer with Win 7, on the new I installed directly the V5, but now the V4 does not go.
What should I do?
Thanks a lot.

Hi
Rhino V5 32-bit masquerades as Rhino V4 so plug-ins designed for V4 can be used.
Why do you need to install V4?
If you do, then you must uninstall V5, install V4, and then install V5.

Hi,
what speed !!
because the V5 was a trail version while for the V4 I have a license, I had to change computers and the new has Win 10 Pro, it’s a Dell XPS 15, and I wanted to try the V5 but now the trial period is finished.
I asked for the release of the V6, to upgrade the license with the V5 or wait for the V6, but still I had no answers.
I would reinstall the V4 because with the trail now I can’t save

Hi,
I’m sorry to insist, but I would just like to know if the V4 runs with the win 10, only this…

It will probably RUN fine once installed, the problem will be getting it installed, as the installer was designed for XP.

How to Make Old Programs Work on Windows 10

OK, very nice…
I installed the V4 but the graphics resolution is bad, only for rhino, and I can’t correctly display the menu groups…

thanks a lot
Francesco

If you have a hi-resolution monitor under Windows 10, I think there will not be much you can do about it… Rhino 4 was just not made for that stuff.

OK, my Rhino now is a nice grandfa… that’s it; now

Right. The only way to get Rhino V4 to look right on a high resolution display in Windows 10 Creator’s Edition (1703), is to Not run it at high resolution.

Hi,
I tried and set the resolution to 1600x900, now display correctly and the V4 is an arrow with this hardware…
at the moment it’s OK!

thanks a lot for your helps

Another way to make V4 work is by right clicking on the icon, going to properties, and selecting the Compatibility tab. Check the box to override high DPI scaling behavior, and set the ‘scaling performed by’ option to ‘Application’
It will make your menus display correctly (Layers, object properties, etc.). The only problem is that it will make all of your toolbar buttons smaller. 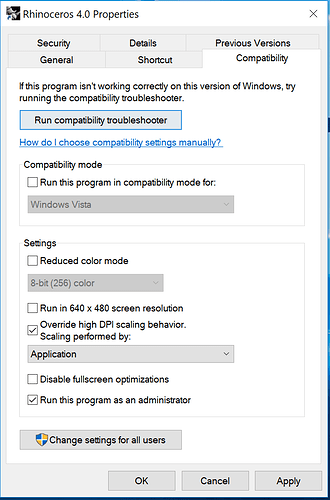