Question: continuity of a curve with a curve on the surface

Execution: “blend curve” (curve (a) to point P, with continuity G2).
Then I use the “Pull” command.

The operation with “Pull” has lowered and then changed the continuity, from G2 to G1.

Question: “Is a geometric/mathematical limit? A limit of Rhino? Or is it a normal aspect for any Cad?”.

If I remember correctly, using Catia several years ago, there is a command developed ad hoc “Blend curves on surface”, which allows you to combine in continuity choice (G0, G1 or G2) a curve with a curve on the surface without having to perform an operation projection (pull).
I believe that the chosen continuity was preserved …

Question: “Is a geometric/mathematical limit? A limit of Rhino? Or is it a normal aspect for any Cad?”.

Its more of a matter of a limit to your understanding of continuity and whats important and what’s not important.

I’m trying to understand, do not get angry!
The blue curve was created by projecting the red curve on the surface with the “pull” command.
Could you explain to the less experienced how did you do it?

I think it’s enough to use a match curve in order to get a G2 continuity between the curves; but I ask: The command “pull” is normal that changes the continuity (it should not or could maintain it?).

Could you explain to the less experienced how did you do it?

RemoveMultiKnot will get rid the internal discontinuity. That’s all you should be interested in That’s far more important than the continuity you are worried about.

As I demonstrated the difference in shape between G1 and G2 is insignificantly small. You would never be able to see the difference on a manufactured part.

A related discussion: MatchSrf results only in G1 or even lower - no matter what settings are set

Thanks jim, I understood your reasoning.

Another possibility is to InsertKnot > Automatic a few times on the red curve and pull it ‘Loose=Yes’. The result is internally smooth (especially if you change the degree to 5 beforehand) and pretty close to tangent to the black curve, and, well ‘prettyclose’ to the surface. 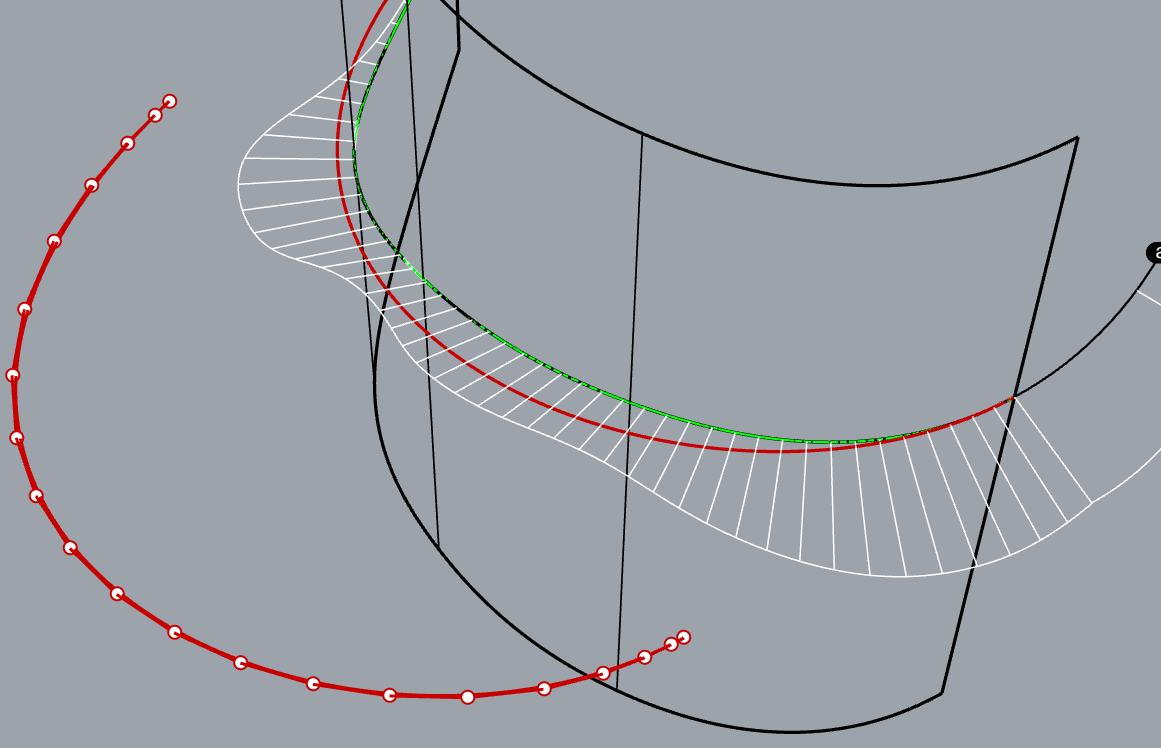 Thanks Pascal, your solution is better (the projected curve of grade 5 has a very good continuity, very smooth), even if the continuity between the pull curve and the black curve one is of type G1.
Better than that you can not get, right?

Pascal, ask: if you do a “match curve” I would get a continuity between the curves of G2; in this case the curve maintains the condition of belonging on the surface?

its just my curiosity…

I would get a continuity between the curves of G2; in this case the curve maintains the condition of belonging on the surface?

If you want the simplest curve that matches exactly and lies on the surface exactly then use extractIsocurve and edit the last 4 control points to connect the curve to point P.
In this file the cyan curve is the isocurve and the green arrows show how the points were moved to create the magenta curve. continuityX2.3dm (40.1 KB)