Prais:
Just have to say that pointclouds in V6 are great! Full color support and so much faster to subselect and delete points. Without discarding the color information of the rest of the cloud.
So THANK YOU for those upgrades!!!

Wish:
Real life point size: The only problem with pointclouds is that we can see right through them, so when zooming in close it is difficult to differenciate the points closed to the camera from those far behind. I have used Pix4D to generate pointclouds and meshes from photos (photogrammetry) and they have by far the best point cloud render I have seen. The points have a fixed size, small colored squares, that cover the points behind, and give the impression of mass, so it is not possible to see through a wall or a tree. (I’ll post an image when I am back on that machine)

I would love for rhino to support “physical” point size, and to have that as a setting for the point cloud. Different densities would benefit from different sizes, so it would be nice to adjust it. (I don’t think Pix4D has a size override, I’ll look into it)

Again, well done and thank you!

I like this idea and don’t think it would be too hard to test since our latest general point drawing shaders support world sizes. It will be a slight hit on performance for point cloud drawing, but probably not a whole lot since all of the calculations would be performed in the shader.

I’m assuming you want a single size for all of the points and not a different size per point. Is that correct?

Wow, That would be great!
And yes that is correct, one setting for all would do the trick. Custom settings for each pointcloud would be nice though.
(I’m on the phone right noe, so I’ll post an image from pix4d later tonight)

User set point size is a feature I’d appreciate. Point size dependent on distance, at least in the perspective view would also be good. I assume both could apply to individual points as well as point clouds.

Here you can see the comparison on a massive mesh
(@stevebaer I can send it to you, it is a 500 MB e57 file)

Also Rhino suffer a bit when it goes in and out of iterated mode if I want to pan, zoom and orbit quickly. (the toggle between low and high res requires a bit of thinking)

Also Rhino suffer a bit when it goes in and out of iterated mode if I want to pan, zoom and orbit quickly. (the toggle between low and high res requires a bit of thinking)

I don’t exactly know what that means.

Oh, sorry, not allways easy to express my self in a different language. What I tried to say is that when evaluating something as complex and transparent as a massive pointcloud requires it to be moved around quite a bit, to be able to tell the pionts close to the camera from those behind, so the movement generates an impression of depth. Rhino uses a nice reduction (what I probably wrongly called iteration, CloudCompare uses an reduction that iterates back into full res) to give a better framerate, but jumping from low res to high res pointcloud takes a bit of time and that wait can make rhino sometimes miss my switch from say zoom to pan. Does that make more sense?

jumping from low res to high res pointcloud takes a bit of time and that wait can make rhino sometimes miss my switch from say zoom to pan. Does that make more sense?

It does make sense, but I’m surprised that you are seeing a lag. All of the same point location data is already loaded on the card; we just choose to draw a subset of the points by skipping over some number of them when the number of points in the cloud is higher that the number of pixels that those points could possibly take up.

The next WIP will include a test command named “TestPointCloudStyle” which will let you experiment with this feature. You should be able to set the point cloud size for points to a world size. Let me know if this works for you and we’ll see how we can work this into the UI

but I’m surprised that you are seeing a lag

Maybe a non-obvious “oops” in the approach to setting up the subset?

Wow, that’s both fantastic and impressive at once! Christmas comes early this year

Thank you for handling that so fast Steve!

I’ll look into the lag bit and I’ll do some testing on the different machines here.

Just installed v6, To see how my scans look like. I made a pointcloud from the scan, but once it is a pointcloud, I can’t see it anymore. It is there, I can select it, but I only see an empty screen.

I’m not sure yet, obviously that is not supposed to happen. If you create a handful of points and run the pointcloud command on those do you see anything? 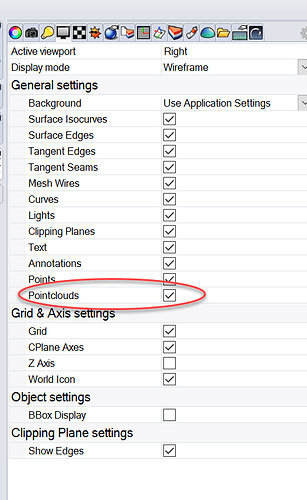 Yes it is on

What is your sytem info? Run command SystemInfo and copy paste result here. It might be your GPU is not up to par.

Is there another way? When I run systeminfo, it disappears the moment that it is ready, so I can’t copy paste or even read it.

What is your sytem info? Run command SystemInfo and copy paste result here. It might be your GPU is not up to par.

How about the info on Tools->options->View->opengl 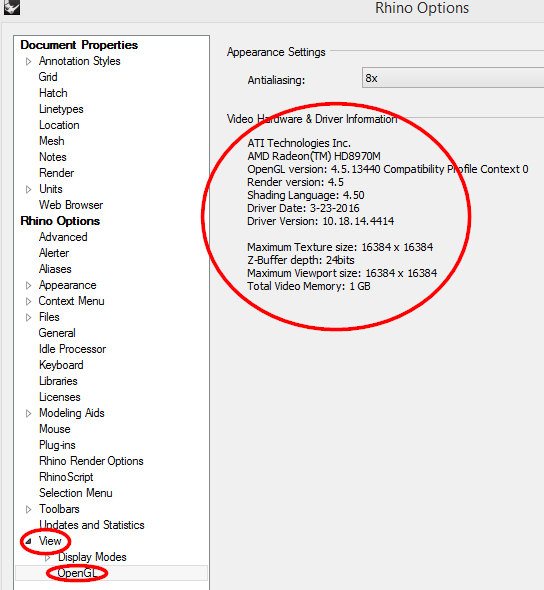 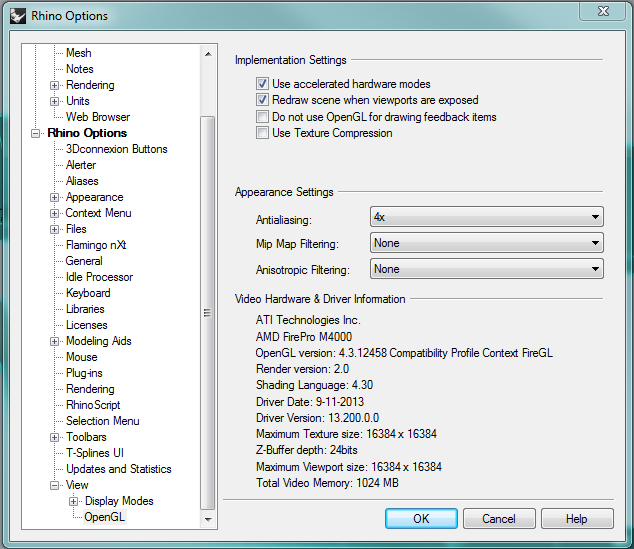