I’m having trouble with a Rhino 7 plug-in I created using the Script Compiler. It has four commands (FUN1, FUN2, …) that are python scripts.

After dragging the .rhp file over it the plug in shows up in the plug-in manager as loaded and enabled, and the four commands are listed. However, in Rhino when I try to type the command in it autocompletes “FUN1_cmd” but not the “FUN1” command, and FUN1 returns “Unknown command”. Any idea what I’m missing here? I’ve tried reinstalling Rhino but same problem.
DI_TEST.rhp (30.5 KB)

Hi Scott - can you post the scripts, or send them to tech@mcneel.com with a link back here in your comments?

Just sent them in via email, thanks!

Hi Scott - in the Script Compiler you can edit the Command settings, including the command names - 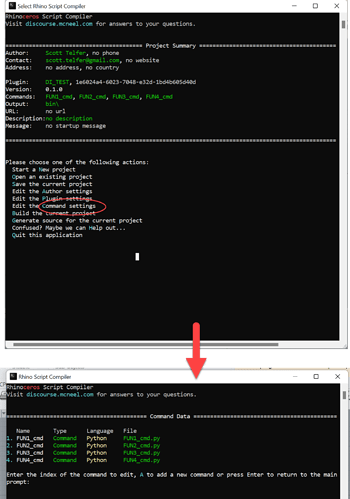 The scripts do not call the functions though - if you build with the Scipt compiler, you don’t need to create the script as a command - you can just use a script ‘as is’. I think yours will work if you add

to the end of each at the outermost level.