Hi there, unfortunately I cannot use the “Complex Transform A” component in the Parakeet Plug-In.
It gives me a solution exception: file does not exist: /Users/…

All other tools work really well so far. Any idea what I can do? 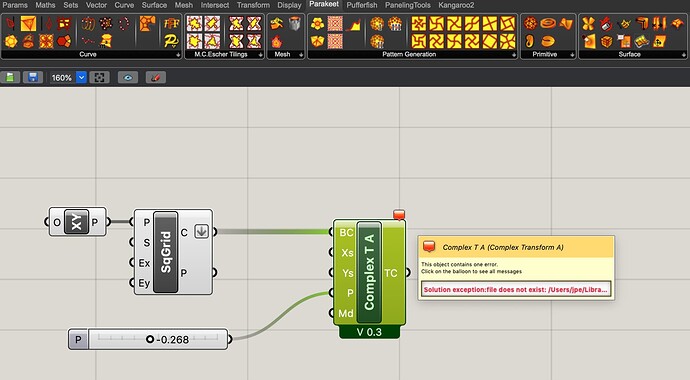 I’m not an expert here, but I believe that Parakeet is dependent on the GHPython plugin, or at any rate the ‘Discretized’ plugin that might be part of it. Do you have GHPython installed?

You might be amused by my attempt to use all the Parakeet components: Exercise in using all the Standard Grasshopper components. I was able to get Complex T A to work correctly, but it does not work if I disable Python. That said, I find the component to be a strange one, and unwieldy to configure usefully. See the ParakeetCurve.gh in the above thread.

Hi Bob, checked it - Python is automatically part of Rhino 7 in Mac - as the other components work I guess that should be fine. Could not find the Parakeet Curve you mentioned.
Jörg

I added the Parakeet links at the foot of Exercise in using all the Standard Grasshopper components - #8 by bob.h.mackay, but this may all be a red herring if lack of Python is not the problem. See if my use of the component works. If it does, something else is wrong with your use of it. If it does not, you have a generic problem!

I tried it out on my Windows machine, which has GHPython, and it apparently doesn’t work for P<0, unless you play around with the Md input on the bottom, in which case it does do “something”, but probably not what you want…

Here’s a way using native GH components. Remember, if you’re using a negative exponent, everything shrinks, so you might have to hunt for the result.

Hi Ethan, thanks for your response and the rebuild of the complex power with native components. The distortion works really well now for the grid. The only thing is that the attractor point causing different rotations of the squares in the cells does not affect the angles anymore. The cells scale in size but do not change in rotation as the original “PatternGenJ” did. Any idea? Parakeet_Distorted Grid_01.gh (25.6 KB)

Hi Bob, thanks for the list - impressive work. Went through them and most components work - the ones that are GHPython dependent do not work; e.g. Tilep4.

So it seems to be a generic problem. Unfortunately Parakeet as plug-in does not officially exist for Mac. I could still use the tools and install. That might be the problem. I guess for a proper use I have to install Rhino on my windows partition and test Parakeet there again.
Best, J

On the windows partition all works properly fine.

I’m not sure exactly what look you’re after, but why don’t you try applying the Parakeet genotype to the grid, before you apply the complex transform and use those rotated squares? Also, Parakeet’s complex transform is not strictly one, since it looks like it multiplies the radius by the power instead of exponentiating it. This at least keeps everything on the screen. You can make the changes in my math expressions if you want. (x*z instead of x^z)

Hi Ethan, I did that already and interesting results occur. But the problem here is that the parakeet genotypes intersect each other. What would be nice is to first scale the grid in some areas and then still have the genotype sitting right in the grid well connected to the outlines of the cell and scaling with it. Hope I could describe it well?