I’m running Rhino 5. My company has a few licenses floating on a server that we share between our two offices.

I frequently find myself in a position where all of the licenses are used, but I just need to open up a model to take a measurement or see how something I’m drawing fits together in 3d, so I don’t want to call the other office and kick someone off.

At some point I remember having the ability to open rhino without a license, with the restriction that I wasn’t able to save. However I can’t seem to be able to do that anymore–is there still a way to do this?

Yes, you can use an expired Rhino V5 eval as a viewer.

Any issues with installing a the eval version in parallel w/ the licensed version?

That isn’t possible.
The Rhino application isn’t different, it’s the license.
Windows won’t let you have the same application installed twice and treat it as a different tool.

Well one thing that might be nice for the future is to open Rhino as an expired evaluation (i.e. viewer mode) if all available licenses are in use…

That is on the to-do list for an updated Zoo.
I know it’s been discussed several times.
My guess is it’s quite involved but it’s still on the request list.

That’s good, would be very helpful.

This feature also seems to be removed from Rhino 6 eval, which I tried installing as a workaround.

An expired eval license WILL work for V6, but the license has to be local stand-alone.
The Cloud Zoo doesn’t support expired licenses.

That is on the to-do list for an updated Zoo.
I know it’s been discussed several times.
My guess is it’s quite involved but it’s still on the request list

Yeah, well the thing is that for pretty much as long as I’ve been around (not quite as long as you JB, but still a good number of years), there have been requests for a “viewer” There still isn’t a good solution offered other than “use the eval version”. So if the policy is to continue in this direction, one should be able to offer a universal solution for all situations.

Yes, but it’s hard to make it a high priority for a developer to break away for a complicated project that won’t generate any revenue or get projects done faster.
It’s a good idea in need of a developer with not enough to do.

I’ve been here 31 years and I’ve yet to see a developer with not enough to do.

I’ve been here 31 years and I’ve yet to see a developer with not enough to do.

When I open Rhino 6 I see this screen: 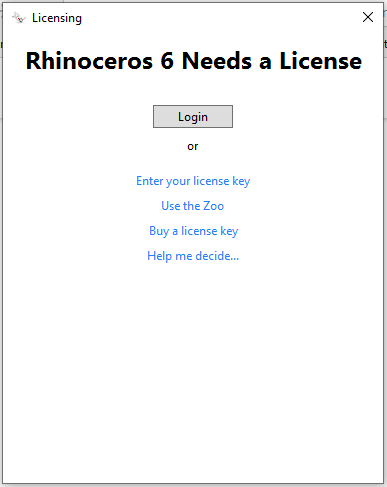 Assuming your requested a 90-day eval from the Download page on the Rhino Web site, you would have entered your email address.
The system would generated a license key and emailed it to you.

Did you look in your inbox?

Ah yes. Sorry had done this months ago, forgot that evals were issued a license key. This works, thanks for your help.