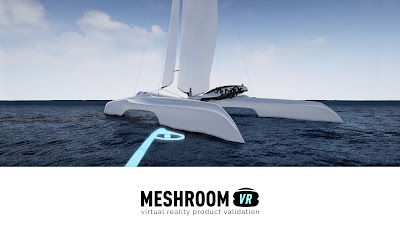 Virtual reality has been around for a while, but only affordable until now to large companies and VR specialists. Meshroom VR is on a mission to democratize virtual reality validation for designer studios, product engineering, marketing and other product-related teams. Meshroom VR Studio offers a fast, affordable and very realistic digital prototyping solution. The team is focused on design quality and user experience to produce the most intuitive software. Users can get started fast and work autonomously.

Rhino can handle complex shapes projects where visualizing the result at scale 1 is especially important. Acknowledging the match between Rhino users’ expectations and Meshroom VR Philosophy, Meshroom VR made sure to support DAE and FBX Rhino generated files in the best possible way. The DAE format is extremely efficient. It allows a super fast export from Rhino and import to Meshroom VR. In just 20 seconds, complex structures over 5M triangles are loaded with their Rhino textures. They can be visualized instantly in beautiful immersive virtual reality showrooms. Reviewing them with the design team or with the customer is then a real pleasure.

Yeah, that’s a lot. Are there any other affordable options out there. I recall someone making one for remote meetings so people can join the virtual space from different locations. But I can’t remember who was doing that.

I hope they make some money but at that price I doubt it. They sure won’t make any money designing sailing cata (quad?) marans…

Well, for VR, there’s Simlab Composer. Not quite as “drag’n’drop” as Meshroom seems to be, but all the more powerful, does interactive VR as well - make things grabable, automatic and interactive animations and events, grabable clipping planes and more. Aaaand has a slightly crippled version of Keyshot’s render engine for off-line rendering if needed and exports 3D PDF’s. All for the price of 400 $ for a permanent license. The interface is… different, but once you get the hang if it, it’s OK. For simple things, it’s very straight forward - beats going to Unity for simple design variations/CMF/simple interactions. We made a few default studios (for medium and large designs), so bringing a Rhino model to VR usually takes no more than 5 minutes. Haven’t tried Enscape yet, as my trusty - but old - Quadro 4000 will not let me, but I guess it does some of the same things?

Edit: Oh, and you can export your VR scenes and run them through their viewer, either on anormal PC without VR setup (FPS style) or using Vive or Oculus… and some of the newer stand alones as well, I think. And export 360° pano’s for Cardboard-style VR’s. And a bunch of other stuff that I don’t use

Hmm, it’s an external software, not a Rhino plugin. The price is quite high. I think, Enscape will get more users - direct Rhino plugin and good pricing - 45$/month or 450$/year. I tested Enscape a lot with a GTX1080ti and I have a lot of fun to create VR/stillimages/animations. Only I wished some options could better controlled by the user.