I have been constantly working on Make2d for the Rhino 6.0 WIP and believe we have made great advances from V5 and the product is ready for prime time.

Lately I have worked to improve the performance both in the large single polysurface case and the case of many objects. Most of this involved spreading the workload over multiple threads. I have also tweaked the progress reporting feedback that the command offers so the progress bar isn’t stuck at 0% or 99% as often as before.

I know there are features that people would like to have that have not been added. I think the top of this list is getting a closed curve from the intersection with clipping planes. These closed curves can then optionally make occluding geometry so cut objects appear capped in Make2D. Also the 2D-closed regions could be made hatched.

However, first I want to know what the problems are with the existing features. So please give it a try and let me know.

Just a reply to say Thank you!
It seems this was a major project with many tough bumps and most likely the accompanying frustrations.

I’m happy to see so much improvement!

Launched the v6 WIP to test the Make 2D tools. The Commands plug-in wouldn’t load. Some commands worked as expected, but none of the Arc tools worked.

Hi Francis - did you get a message on startup about the Commands plug-in not loading, or did you just discover this? Have you installed and run the V6/WIP successfully in the past?

I have just tested the new make2D command. You can see the results in the provided screenshots below.
Almost no interior meshface edges come through. Any idea why?

Anyway I was wondering if there is a way to implement the maked2d function with the printing function?
I imagine this option to replace or add to the vector printing option which I find a little disappointing. As a third option this vector overlay, blended with the regular bitmap printing function, could produce a result with nice, clean and crisp vectors without antialiasing. That would be a great feature for Rhino 6.
Do you think this is possible to implement? 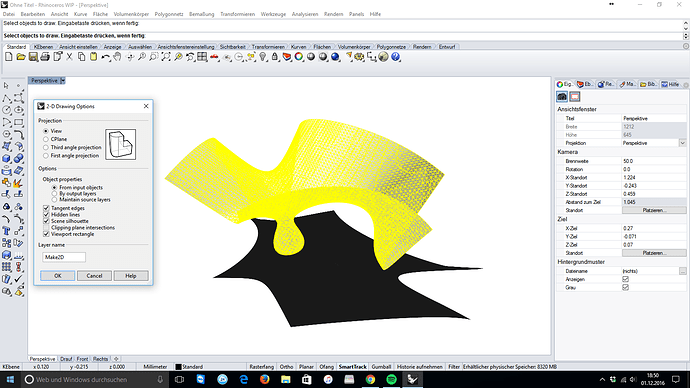 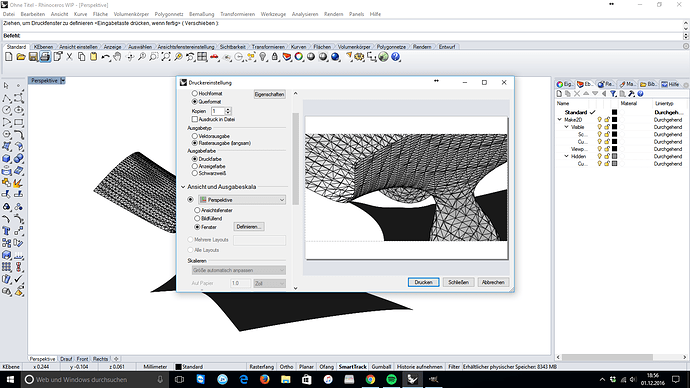 Try Unweld with angle tolerance=0 on the mesh before running Make2D.