Hi
I have a icosphere made up of a lot of trimmed surfaces.
Now I am trying to reflect light rays of this object using the mosquito plugin
but somehow it is having issues with the trimmed surfaces

is there a solution for this?

If that M thing is using the RayShoot Method, that’s expected since trims are NOT supported (see SDK comments on geometry). However you can do that with other ways (Notify if you need a C# that does it). 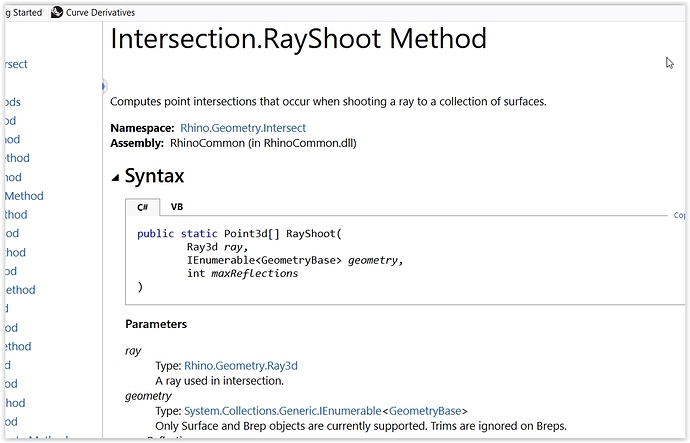 Hi
yes what would be the other way to do this?
and would this other way also work for refractions and not just reflections? as seen in image bewlow (has the same issue with trimmed surfaces)

thanks for your reply

Well … the bad news are:

1, I have related stuff (classic ccx + normal at closest point + reflection + …) but I’m not in the practice right now (and since there’s a critical F1 race in Japan this w/e [and MotoGP] … ).

2, I don’t use components (or add-ons) for baking by beans: just C# code. But you can pretend that this is some sort of add-on.

Until Monday … and staying on that RayShoot theme get this and have fun: Random (even or not) points are created on a Sphere (center at t on track curve) and then rays are shooted from the center to every point.

See the trim issue: ray reflects on the BrepFace hole (because it doesn’t take into account the trim info).

On the other hand if a given BrepFace is NOT a Surface (meaning there’s trim around) one can use the BrepFace.IsPointOnFace Method and thus filter the results.

Not sure if it’s of some help to you, anyway attached is a demo using vanilla gh including IsoVist Ray.

yes what would be the other way to do this?

Well … other than Kim’s native thingy … I’ve found at home a C# that does RayShoot stuff (without RayShoot) meaning that he respects trims and multi reflections (obviously: recursion at work here). For a refraction option it requires some lines of code more.

Can’t you just convert your trimmed surfaces into a non-trimmed triangular surfaces?
(surface from 4 point with 2 consecutive point equal each-other)

Hi
i gues that solution works

I just tried it for one triangle and seems to be a good solution. Do you know if there is a fast way to do a large amount of trimmed surfaces at the same time (and not doing them manually)

thanks for the tip

Hi
I Just took a look at this. This looks promising. I have a script using mosquito components (see my long comment bellow). but this only works with surfaces. no breps meshes or untrimmed surfaces. this would be a good solution in changing that without having to have any knowladge of C#.

Your help is very much appriciated
thanks

Hi
wow you are so helpfull. Thank you

I have already managed to make a script that works with simple surfaces but the script is having issues with trimmed surfaces and doesn’t work with meshes at all.

caustics are mad up of diffrent amount of bounces on the inside of the geometry as seen here: 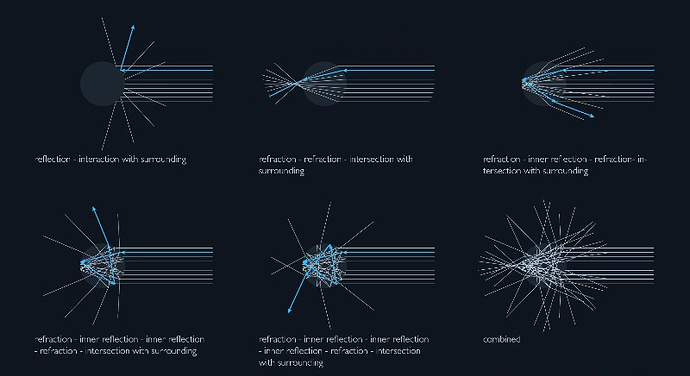 i can manage on simple objects like a sphere. Each color is one part of the image above. just reflection. refraction refraction and then so.
I always culled away the rays that don’t end up hitting the ground plane because these don’t end up as caustics: 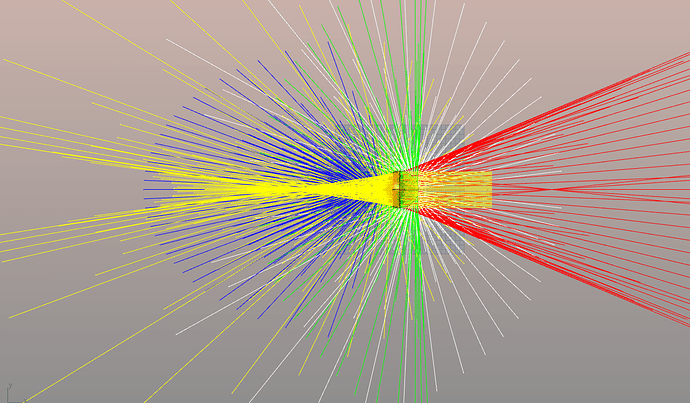 my goal is just to achive a script that can do exactly this with any tipe of geometry. 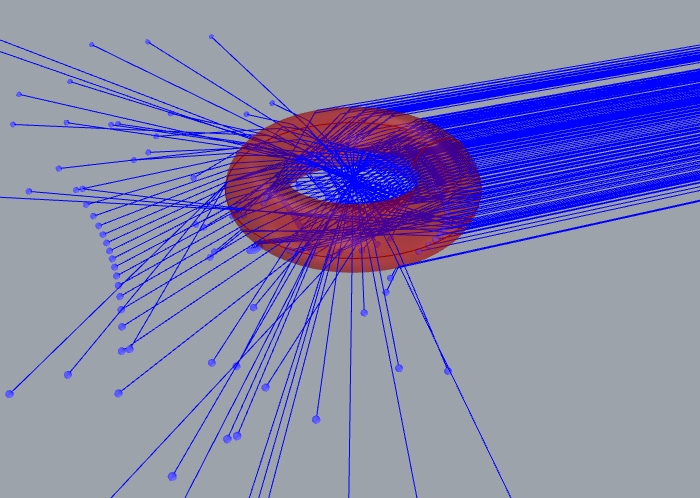 just as an insight to what I am doing

wow you are so helpfull. Thank you

You are very kind but I don’t think so: since your beans (native stuff) and mine (code) have nothing in common … I can hardly see any practical help from my side.

I can’t promise any ETA … but maybe at some future time I could add the MIA capabilities 1/2 as above.

I have absolutly no knowledge of c#

You are a wise man.

Anyway I’ve found 10 minutes to write a basic refraction Method: amuse yourself with these freaky lines that do freaky/ominous things (used in other freaky things) for computing the refraction of a given ray (inside or outside a solid). 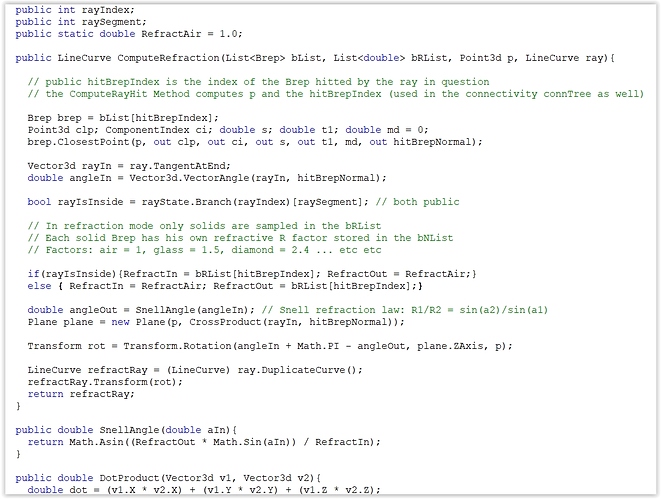 I will give it a try! I will let you know how I am doing and what I managed

I will give it a try!

You can’t do that (general case: anything around [open, closed Breps] + multi ray bending with regard all present Breps) without some sort of loop technique (in coding the most efficient is recursion). Anyway, found 15 minutes more to continue on that.

BTW: A critical angle filter is obviously a must (when a refraction becomes reflection):

BTW: I must manage far shorter times: 13 milliseconds are a lot for such a simple task (blame the Brep Normal Method).

Here’s a very simple demo thingy on that Snell law. You can do it obviously witth native components (but the other things that the forthcoming C# does … well … er … you can’t).

BTW: angleIn is the Vector3d angle between the Brep Normal (inversed if ray is inside) and the rayDirection (always inversed) with respect a plane defined from the hit point (origin) and the CrossProduct (rayDirection, Normal). Google: CrossProduct and given the opportunity do the DotProduct search as well. There’s native GH stuff on these I believe.

Observe that going from air to some material (with some R) is OK … but the other thing MAY or MAY NOT yield an “escaped ray”. If the ray is trapped inside we have a reflection (life sucks).

This means that the critical angle is related with the rayState (in/out) AND the angleIN AND the R value … meaning that there’s no need to include it as var (if the NaN test is considered an “elegant” way to cut the mustard) - NaN means Not a Number.

After all these Greek things here’s the general algo (Mode 1: Reflections, Mode 2: Refractions and Reflections):

Put all the above into a loop (controlled via a loopCount var) and deal with any Brep List VS any ray List.

Here’s a visual demo on that trapped inside (Refraction) ray matter. Shooting from the inside of a Sphere that has R values (see overrideR) from 1.31 (Ice) to 2.41 (diamond). As the R grows less and less rays can escape … and for these values/settings captured and for that emit Topology diamond yields the same results as Mode 1 (Reflection).

That’s why girls like diamonds meaning that we should work overnight in order to offer them the best of the best.

Hi again.
sorry for replying so late. but I was super busy

Uptill now i haven’t even taken the critical angle into acount. I knew at some point I had to but not sure how.
Your small C# component just took care of that. I don’t really know about coding but I managed to modify it slightly for it to be usefull to me

thank you for that!!

With your help and the tipp of:

Can’t you just convert your trimmed surfaces into a non-trimmed triangular surfaces?
(surface from 4 point with 2 consecutive point equal each-other)

I am already so much further than expected

OK … try to do it with components (+ some Loop thingy the likes of Anemone) and if you fail: drop a word for the salvation.

As a challenge try to mastermind a connectivity thingy as well: for any node of any final polyline ray … compute the index of the Brep that caused the bending (that’s a classic connectivity Tree - A MUST for any engineer worth the name).

Anyway … since you asked for it I’m posting the salvation (or the torture ?) here instead on a PM basis (because maybe others could find it useful).

Info panel informs you about some basic stuff:

All in all: you can pretend that this is some kind of add-on … or … learn C#, double click it and discover the big rabbit hole called coding. But why bother? in a few years from now an AI computer could do it for you (rendering you obsolete - no pain no gain).