Could someone please tell me why the following scenarios are generating an invalid seam. 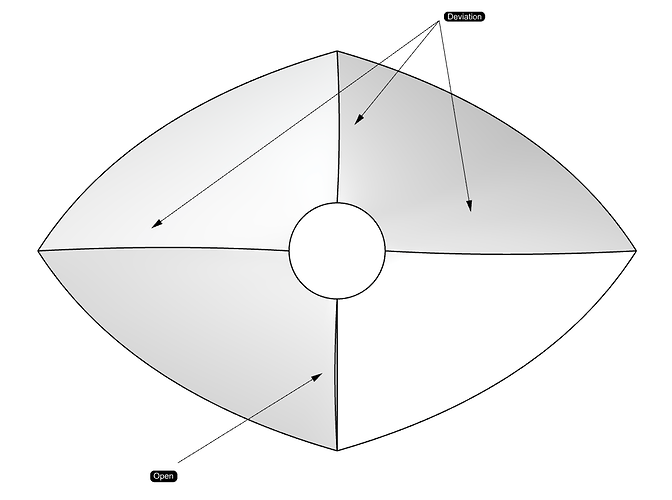 I’d like to understand why Rhino can’t execute a valid closed sweep2 based on these curves because I am not able to give a logical answer to those who are asking me where this unexpected behaviour comes from.

Thanks in advance.
Rodolfo.

Honestly, I don’t exactly now why this doesn’t work, but I’ve encountered it before in different scenarios. If I had to speculate, I’d guess that it’s probably not possible to create the exact surface that you desire and would be necessary for the precise seam placement with the Sweep2 command, since it creates ruled surfaces. The first section and intermediate curves set certain parameters that the algorithm needs to interpolate between, but for the last curve, it needs some leeway to even get it done as a ruled surface.

For your example, there is a simple workaround though! Simply explode the bottom polycurve, and split the top circular curve with the section curves.
Now, you can Sweep2 in sections, either from top to bottom (or vis versa), or from left to right (or vis versa). The resulting surfaces can then be joined into a polysurface (or brep). 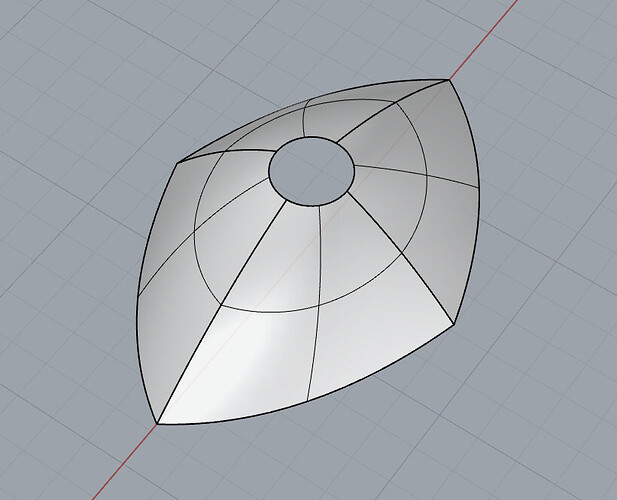 @diff-arch
Thank you for your answer.

Work around a problem is naturally always a possible option and what you suggest is what I already did.

But what is really questioning me is the WHY.
Without a good understanding of the logic ‘under the hood’, it is hard to explain that behaviour to people pointing that problem during a training, a demo or a course.

Bug or inaccuracy are the words they use.
I don’t like to hear it and would like to be able clarify things but I confess I am lost here.

Thanks for your inputs.
Rodolfo

But what is really questioning me is the WHY.

i boldly guess it has to do with the parametrization of the surface. since sweep does not know that you want the isocurves to match up with all the joined kinks or creating a finished boarder there, trying to finish the sweep in one attempt. @pascal might have an idea why exactly, i believe i saw such a case being discussed at some point.

if you use a simple ellipse as below, the result will always be a closed sweep. anything diverging from that ideal situation will cause a mess. 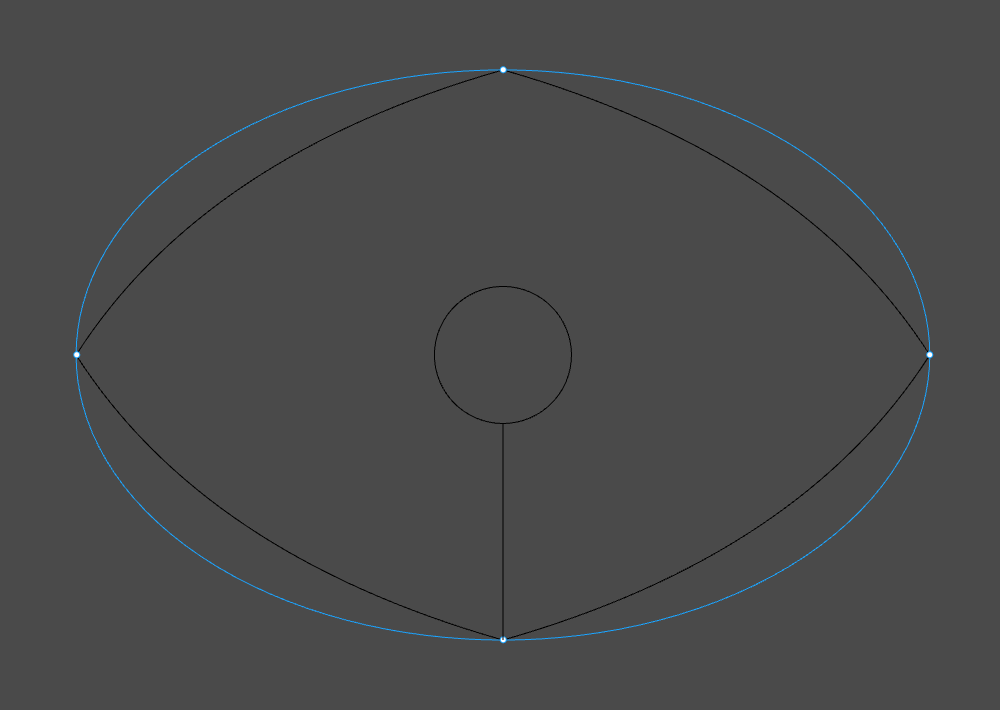 best to stay away from joined kinky curves as rails and do them bit by bit, if you are seeking for predictable results

in this case i would just sweep a quarter and mirror it twice.

@encephalon
Thank you for your answer, interesting.

Then, if Srf parametrization is the main reason, implementing a ‘Matching’ option for ‘kinky’ rails could help, this scenario is not a rare situation.
Being forced to do in several steps what could be done in one pass can be frustrating.

I played with a massive interpolation to check how is reacting the generated surface seam, the more the sampling is growing, the more the Srf seam becomes accurate ( but never valid ).
On the other hand, the complexity of the resulting Polysrf is stable.

Here’s a test with 3000 sample points placed on the ground rail. 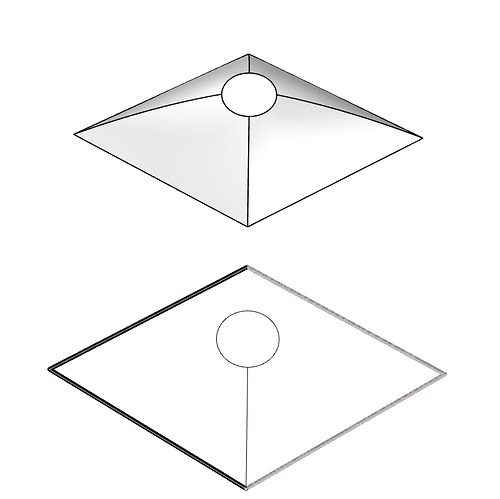 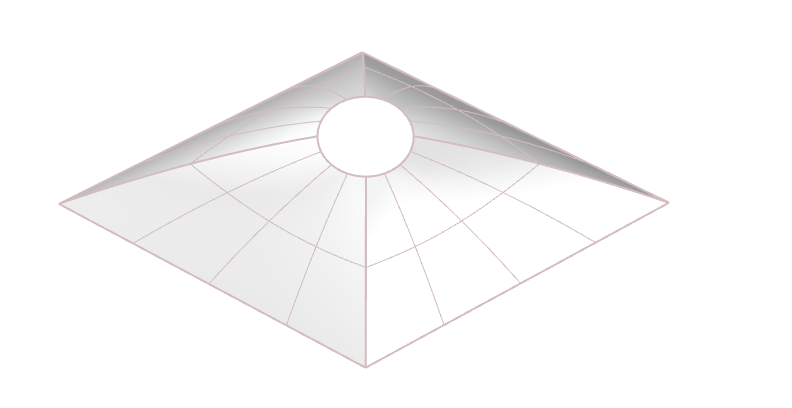 I’d guess that it’s probably not possible to create the exact surface that you desire and would be necessary for the precise seam placement with the Sweep2 command, since it creates ruled surfaces.

Sweep2 only creates a ruled surface if the section curve or curves are straight lines, ie degree 1 curves with 2 points. The surface in this thread is not a ruled surface.

Right, I don’t like the word BUG but what you are saying make sense.

We can live with it, but Sweep 2 should be improved then.

We can live with it, but Sweep 2 should be improved then.

It doesn’t seem to be a bug, since what you’re doing is probably only against the nature of a ruled, untrimmed surface, as I already explained above. This is also why improving the Sweep2 command - which is meant to produce ruled surfaces - just to make it work for your case, would probably only result in perverting the tool itself.

Only because you have a hammer - in this case the Sweep2 command - does not mean that everything should be regarded as a nail, or something like that.
As I also mentioned above, your desired geometry looks more like a polysurface, which would be composed of a set of surfaces, not a single, ruled one.
You simply need to chose your strategies or tools more carefully. Not everything is meant to be done in one go. 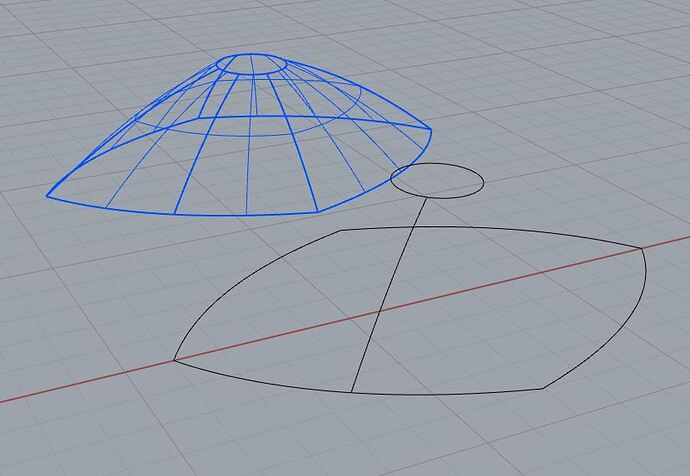 This is also why improving the Sweep2 command - which is meant to produce ruled surfaces - just to make it work for your case, would probably only result in perverting the tool itself.

Sweep2 is intended to create swept surfaces, a small subset of which are ruled surfaces. 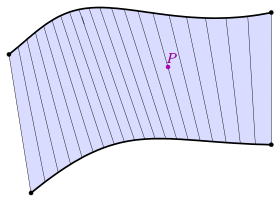 In geometry, a surface S is ruled (also called a scroll) if through every point of S there is a straight line that lies on S. Examples include the plane, the lateral surface of a cylinder or cone, a conical surface with elliptical directrix, the right conoid, the helicoid, and the tangent developable of a smooth curve in space. A ruled surface can be described as the set of points swept by a moving straight line. For example, a cone is formed by keeping one point of a line fixed whilst moving...

Sweep2 creates polysurfaces if one or more of the input rails or sections is a polycurve or contains kinks.

Sweep2 can have a problem if the input rails are closed curves or polycurves which are not tangent and a section is at a kink in an input rail.

You simply need to chose your strategies or tools more carefully. Not everything is meant to be done in one go.

It is not about me, it is about learners that are experiencing this situation and are asking me to clarify things regarding one of the most used Rhino command.

The ruled concept you mention is not included in that definition. This is exactly why I am asking here if someone can help understand better the WHY.

Regarding perverting the tool, I understand the POV but I do not totally agree.

When a tool is not well understood or explained, complementary informations or extra options may sometimes help to improve its use or contribute to choose relevant strategies ( as you wrote ).

Thank for the contribution, it helps .

Thank you for your Input.

I am not able to open your file because I use RH6 but I observed that you probably moved the Curve Seam of the bottom rail to the middle and rotated the top rail Perp to that location, correct ?

I tried that approach on my side and indeed, the resulting PolySrf still contains deviated IsoCurves but is closed. 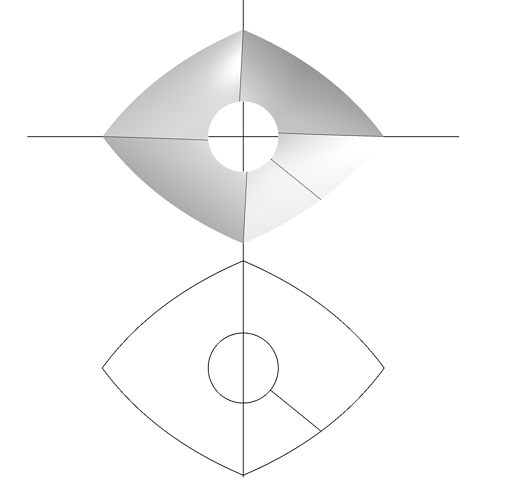 May I ask you what is your perception of the underlying logic behind that behaviour ?

I’m not obsessed by creating such a surface at once with Sweep 2, I’m trying to understand how this command works internally to teach it the right way and provide clear answers.

I am not able to open your file because I use RH6 but I observed that you probably moved the Curve Seam of the bottom rail to the middle and rotated the top rail Perp to that location, correct ?

The rails were unchanged (except for being moved. V6 version of my file: PolysweepDC01V6.3dm (1.4 MB)

May I ask you what is your perception of the underlying logic behind that behaviour ?

Are you asking why there is a gap with the section at the kink? My guess is the developer did not envision that situation, or made a mistake in the coding. That is why I called it a bug.

Thanks for the shared file.
Playing with the Add Slash option helps to improve the accuracy to the resulting PolySrf.

Sometimes it works and sometimes it does not works depending on the scenario ( Kink is a key point here )
At least, your inputs are helping me to accept that there are situations to avoid when using the Sweep 2 command.

Thank you for your contribution.

I would also classify this as a bug, if you explode the resulting polysurface and then do a positional MatchSrf of the last surface edge to the first (where the gap is), you get a good result - Sweep2 should be able to do this automatically.

the Sweep2 command - which is meant to produce ruled surfaces

No, that is not a correct interpretation.