I have noticed that when exporting perfectly constructed 2 dimensional shapes in illustrator format
that shapes tend to diviate from the original rhino 5 file. By importing and overlaying the exported file in Rhino
this is absolutely visible. Any suggestion for imroving this problem?
Compared to that any original illustrator file gets imported 1000% accurate, even when exporting a drawing made in and from corel drawX5 as ai.

I have encountered same problems when saving a rhino drawing as dwg, dxf and even pdf. Would be nice to get some idea of how to get that problem solved.

Is an svg export possible? this seems to be quite a good format for exchanging VECTOR DRAWINGS?

Hi Dragan - can you post a simple example? I suspect the scale is very small- is that correct?

Yes it is but very visible. It gets a little better when I converted the curved polylines in curves, but even then when enlarging one can see the difference in curves. Pretty strange as Rhino will import any vectors absolutely 100% but only providing the vectors for export it makes some really unpredictable changes to curves (funny enough any straight line gets matched exactly) I will make a screeb shot in a few minutes and will post that little problem

If you compare the points and degree of the original Rhino curves to the AI curves you exported and imported, they are not identical, because AI doesn’t support NURBS curves like Rhino does. The approximations are very close and well within file tolerance, but not perfectly identical. I’m finding the Rhino degree=5 curves deviate the most when round-tripped through AI.

What do you mean by enlarging? Do you mean zooming in? I guess Pascal is referring to the overall size of the object in document units in relation to the document tolerances.

export improt difference.3dm (48.3 KB)
ok heres is a basic sample i just made for reference. (i thought an original file is better then a screenshot) John I agree with you totally your description is perfect way better then mine.
Still vectors are vectors and should be both im und exportet without diviance in shape…i really would like to find out how to get that mismatch to Zero!

For best result:
Close all visible panels and toolbars on viewport. You can not close top, bottom, left, right docks.
Select objects and use "ZOOM S"
Export to AI

Tatar…sorry but you are missing the point!

Not quite. Tatar’s workflow will improve accuracy if you export to AI with the “snapshot” option. PDF and probably Illustrator files are made for print and require only resolution up to a certain point. If you try to print a circle with a visible line thickness, it just makes no sense to sample the circle with more accuracy than some factor of the minimal line width.

So once you pass through Adobe printing formats, your vector gets downsampled according to the page size and resolution. If you zoom in or choose a larger scale on Export from Rhino, those sampling deviations will grow smaller. They will never disappear.

thanks for your explenation…I seem to understand the problem almost, however is there any vector format that can be exported from Rhino that will be as accurate as in Rhino itself? And if yes what would it be? As far as experienced importing a drawing made in Corel or Illustrator is absolutely 1:1 in Rhino. Only the other way round does not really work, maybee the nurb curves cannot be interpretated 100% as vectors. Maybee Rhino developers could have a look at this issue as sometimes it makes sense to correct curve flow from other vector based programms in Rhino (Rhino has some excellent curature analysing tools) and reimoprt them back for other applications like routing passes etc.
Would really appreciate if I could resolve this “mismatch” issue one day

Exporting a DWG from Rhino will be accurate to a certain degree. There are some options of how to convert the data. So maybe smooth NURBS curves are converted to polylines or a series of arcs. Obviously, that only works within a certain tolerance. The latest version should support all relevant Rhino geometry, so you should be okay with that.

A drawing made in Corel or Illustrator already is sampled at the coarse resolution. Importing it to Rhino will not require any downsampling. If you just reexport that, no additional downsampling is necessary, as your curves already were in a resolution that was compatible with the document resolution.

NURBS is 100% vector. It just happens that Illustrator (and probably Corel) does not understand NURBS. They are limited to Bezier Splines, which are a special case of NURBS curves. This is another point where Rhino geometry needs to be converted. This conversion should be done at current Rhino document tolerance so the result should be fairly accurate. You should talk to Adobe to have NURBS fully supported.

The next release of RhinoWIP will have a fix about this problem. The solution for v5 is to use the FitCrv command on the curves before exporting them to an ai file.

I just experienced this today with a FilletEdge on a square corner making the following round-trip: 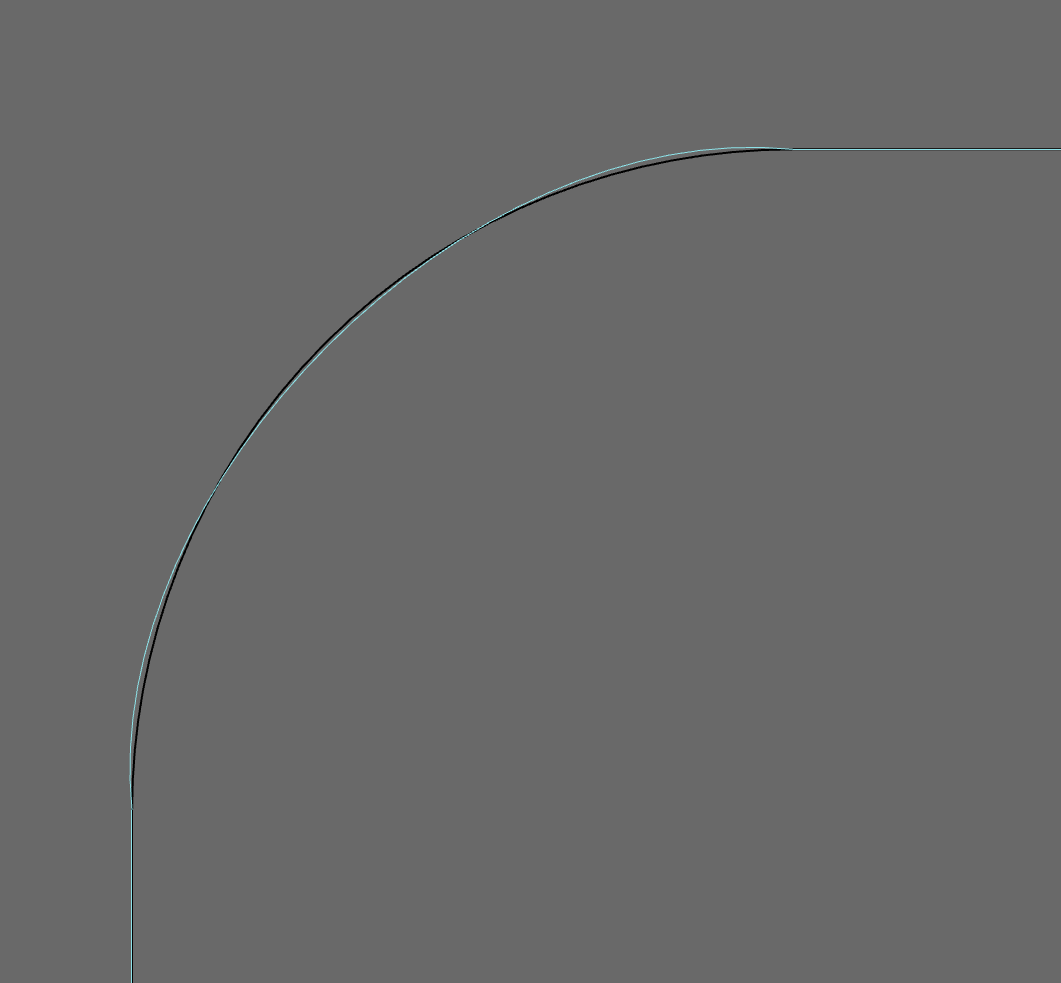 The full shape is 1m wide, and I exported it at 1:16 scale, and didn’t change any sizes in Illustrator, however, I needed to manually Scale the objects when I re-imported them back into Rhino.

The full shape is 1m wide, and I exported it at 1:16 scale, and didn’t change any sizes in Illustrator, however, I needed to manually Scale the objects when I re-imported them back into Rhino.

This is the setting I used to import the PDF back into Rhino. The size is correct. The unit in PDF is inch by default. I changed it to mm. 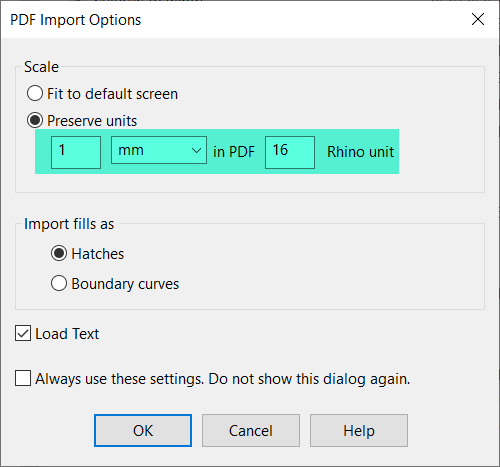 is reported for the deformation issue

when arcs are exported to PDF.