I have a weird problem with pictures.

I read I somewhere , the images in rhino6 are automatically embedded in the 3dm file.

So , I import some images (drag an drop) and save the .3dm file, I purposely deleted the image from the stored folder.

when I open the file again in rhino, the embedded image does not appear, a different image appears.

During the tests “and only once”, when opening .3dm the rhino created a folder “embedded files”, and
this time the images is ok.

This Is a bug?

When saving, this this box checked? 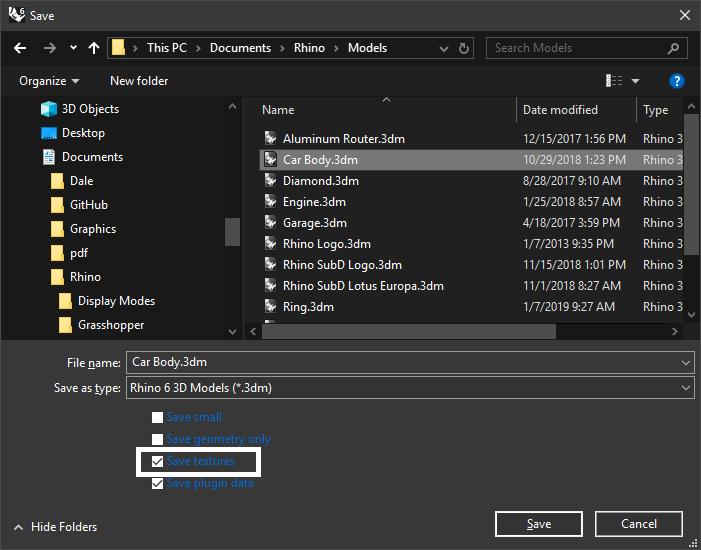 When saving, this this box checked?

@dale, yes this box is checked.

initially was trying to do this process with the my plugin, but I could not figure out why it was not working.

So I decided to test the rhino directly to see what is wrong, and the problem is the same.

@MatrixRatrix - you might move this discussion over to the Rhino for Windows category and see what our tech support staff says.

@ricardo.eira - you might move this discussion over to the Rhino for Windows category and see what our tech support staff says.

OK, just for try understand, Is the same thing happening to you?

I can not duplicate this problem either.
I made a new file, ran Picture, saved the file making sure the “Save textures” option was selected, closed Rhino, deleted the image file I used, restarted Rhino, and opened the file again.
The image was shown on the surface.

I tested it successfully in the Mac V6 Beta the same way as well.

I’m going to reinstall rhino, with so many tests in the plugin I probably have something corrupted.

@MatrixRatrix have you solved this issue ? I always had this problem and it’s still there in the last release of Rhino 7, it’s driving me nuts.
Yes I ticked “save textures”, but the image is still referenced and not embedded.

Hi Felix - images, as for PictureFrame/Picture, which could be embedded but were not by default in V6, are no longer embedded in the bitmap table in Rhino - if they are not present on disc then Rhino should unpack a folder on disc and load from there - this is true of any bitmaps used in marterials and so on. As far as I know only BackgroundBitmap images and possibly Wallpaper images are embedded in the bitmap table now.
Not sure if that addresses the your question…

@MatrixRatrix have you solved this issue ? I always had this problem and it’s still there in the last release of Rhino 7, it’s driving me nuts.
Yes I ticked “save textures”, but the image is still referenced and not embedded.

I didn’t solve it, it’s still the same.

In my opinion, rhino should embed all the resource images in the .3dm file itself.

In my example I work with some images in my drawings, it is extremely annoying whenever the original image is deleted or moved from folder rhino creates a new folder with images.

My pc starts to get a lot of garbage, it always forces me to delete these folders,
not to mention that most of the cases the folders are creating disorganization in my structure,
that sometimes we end up forgetting to erase.

it happens when there is ťdifferent picture with the original url. rhino first looks for the link and then brings the picture from the 3dm

I thought the order was:

I’m a tech monkey so I do not use the tool.
I could easily be wrong.

my problem having files on cloud was that i got different pics on different pcs because it looked for the link first (textures saving ticked). i had different images in dowloads directory under same name and i couldnot force rhino to fetch images from embedded files folder