How to draw a logarithmic spiral intersecting two concentric circles

Back in December '15 I asked “How to draw an arc intersecting two concentric circles”. The help I received was, in a word, amazing, and I so appreciate it. Thanks!

Today I am writing to ask if anyone could help me do the same thing, this time using a logarithmic spiral instead of a circular arc.
The user would specify the radii of the concentric circles, say 5 inch and 6 inch and angles of intersection of the circles and the logarithmic spiral, say 15 deg and 20 deg, respectively.

I believe it would involve moving the origin of the spiral away from the center of the circles. I’ll look at the thread about the GH implementation of Archimedes Spiral which I saw before.

The solution is to use grasshopper:
Series - Fibonacci - trigonometry function - points - interpolate.

You must research online and try to do this in grasshopper. When it doesn’t work at all anymore, ask the forum by uploading what you’ve got.
Ok?

ask the forum by uploading what you’ve got.

Since a log spiral will make the same angle with all circles, you’re right about it having to be shifted from the origin. Here’s a possible method using the Galapagos solver. The sliders being considered are the y distance of the spiral from the origin and the pitch of the spiral. The Fitness function is (x-15)^2 + (y-20)^2, where x, and y are the two candidate angles of intersection. Minimize that sum. It takes some finagling to get nice starting values and their ranges, and I don’t know what circle radii or pitch you’re interested in, so you’ll probably have to play with both sliders before you run the solver or go back and forth as I did…
See you in four years!

See you in four years!

Thank you sir! Unfortunately, I, having not upgraded to Rhino 7 from Rhino 5 (yet), could not open your Grasshopper file. I’ll try and decode the image and try to generate a grasshopper_0.9.76.0 version.
Much appreciated. ~ David

Your intersection points are not working because you need to flat the list before; tthe curves are in different branches.

I rebuilt your script too
spiralintersection_JPL.gh (7.5 KB)

I rebuilt your script too

Thank you! As soon as I can afford the upgrade, I’ll get a license for Rhino 7. I couldn’t load your definition.
Thanks again. ~ David

Otherwise here is another way to do it

And for the angles, I would use the same process that Ethan. Galapagos is useful to find the best parameters to have an specific angle, but you can also control them manually (without galapagos)

I don’t have Rhino 5 immediately accessible, but I don’t see anything in my def which is unique to V7.

Here’s an alternative approach that doesn’t use a solver, but fits the circles to a spiral of your specification. You can tweak the spiral parameters and the circles will reorganise. 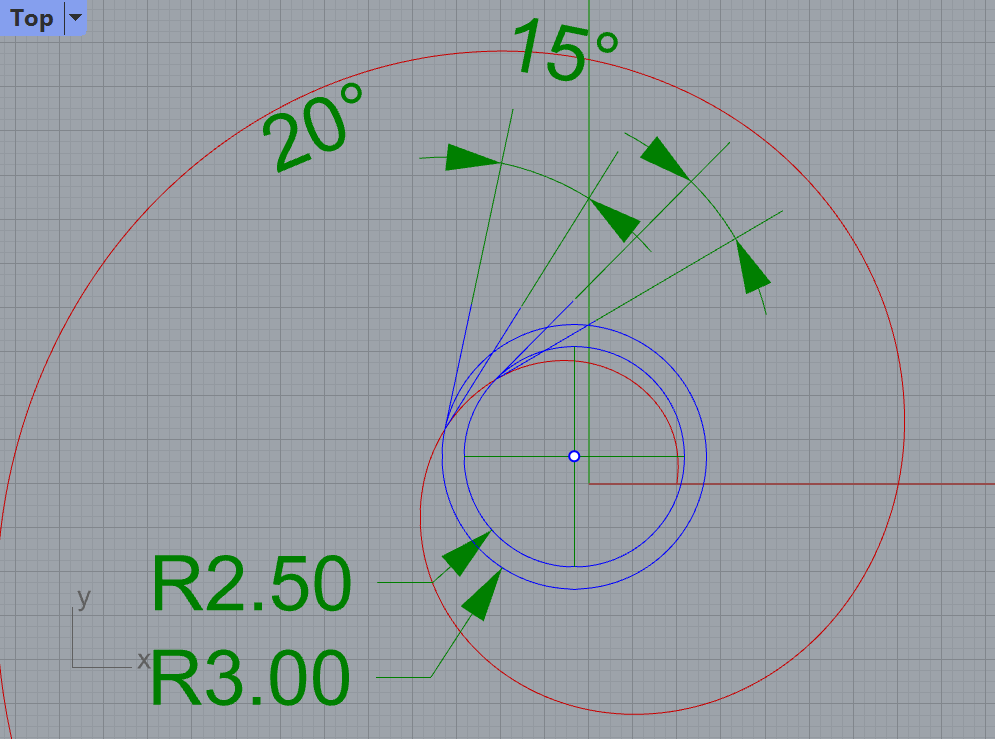 Jeremy, man I can live with some untidy wiring! What you have shared is, in a word, amazing. I’ve played with it for an hour or two trying different radii approaching 6.0 and 6.5 and angles approaching 45 and 50 respectively. I lost track of time. Can I get it to preview the radii and angles? I haven’t figured that out yet.
Thanks a Billion! ~ David

Here’s an updated version which adds a rough and ready display of the angles and radii…
LogarithmicSpiralplaythingV5Mk2.gh (21.0 KB)