Help: First time in grasshopper. Why does Loft produce no results?

I referenced a Curve from Rhino, then in Grasshopper offset it and moved it.
I’m trying to Loft between the original curve and the new curve.
After plugging them both into a Loft I’m not seeing any results. There is no error warning, and none of the nodes are disabled or preview off. I even tried baking the result and still nothing!

Is there something I should check to get it working?

You probably need to right click and flatten the curve input on the loft component.

Parameters has 3 accesses: item, list and tree, you can see it in the tooltip leaving the cursor over it (after the name put “as list” or “as tree” or nothing if it’s as item). The lists are labeled with something called “Path”, as its identifier, like {0}, {0;2;0;54}, {1;0}. The item can be understood as a list of a single data and the tree as several of these lists. Depending on the structure you give it (an item, list or tree) and the type of access of each input, the component is executed N times, in your case your loft is executed 2 times. The offset component, because sometimes it breaks the curve (depending on the type of offset you make) its output must return a list for each input item, and to differentiate with other possible input, it add another 0 to its path, that is, if your original curve was at {0} the offset curve will be at {0;0}. When you join both curves in the loft, GH does not understand that both belong to the same list, but that you are giving it two lists of one curve each. You can check then, leaving the cursor over the loft, that it has been executed twice (once for each list, since its input is from the list access and you give it a tree (of two branches/lists)) instead of once with both curves at the same time. So to fix it, you have to put the two curves in the same path, and the quick way to do this is by right clicking on the parameter > Flatten, which is like saying put all the data you have in the path {0}. Then the loft will compute a single time with both curves.

If this is a struggle for you, I would (in the nicest way possible) suggest undertaking a beginners tutorial, otherwise you’re going to be posting on the forums quite a lot and asking questions you can find there. Try the Grasshopper Primer http://grasshopperprimer.com/en/index.html, it’s a nice goto reference to have close at hand. 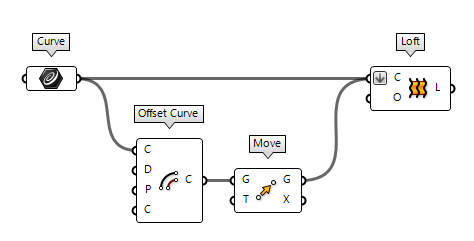