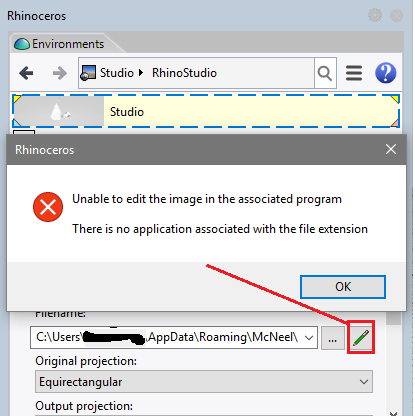 You will have to install a software capable of opening HDRi files, making sure that .hdr and .exr are properly registered for it. 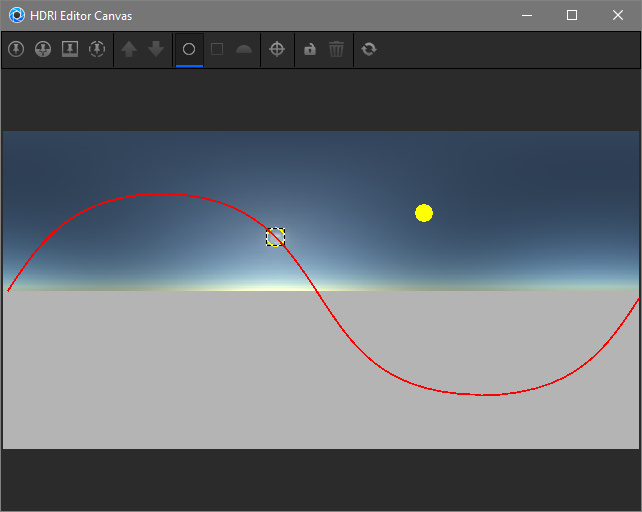 Perhaps the edit button (green pencil) isn’t in itself clear enough, but I guess the assumption is that the tooltip (open image in associated editor) for the button gives enough hint that it is for opening an external (associated) editor. The same for regular bitmap textures.

Do you think the icon or messaging needs improvement to convey that better?

No it’s clear … but if you can add the HDRI editor inside rhino like Keyshot … it’s so great .
Thank you.

I don’t think that will happen, image editing is a whole different beast. At least not anytime soon. There are already many great programs out there that do it very well, and already have been developed for a long time.

I guess that’s a specific thing about McNeel / Rhino. There are already HDR editor plugins and then there’s Keyshot and such. McNeel keeps an ecosystem of un/paid plugins that enhance Rhino’s capabilities.

I don’t think that will happen, image editing is a whole different beast. At least not anytime soon. There are already many great programs out there that do it very well, and already have been developed for a long time.

Nathan, what that Keyshot Editor does indeed is image editing - but it made no sense at all to perform the same thing in Photoshop or other typical image editors.

The idea is to interactively manipulate hdr-images and to see the effect live in the renderer. The most well known product of that category is HDR LightStudio. It’s a very interesting lighting tool but as a standalone app it’s usefulness greatly depends on the bridge to both the respective 3D app and the supported 3rd party renderer: Both are moving targets, the bridge will likely break.

Keyshot built a similar, albeit simpler toolset on their own, but the best / most universally useful place for such an editor without a question is the host 3D application itself - that way it could be used by any renderer engine. Someone also built such a tool for Blender btw.

It would probably not take too much effort to do something simple - but that would not be the same as full HDR editing, as what the pencil button can offer. But I understand that even some simple HDR ‘editing’ tools would be nice. Placement of some simple shapes that can be blended with several different styles (mix, add, sub, mult, burn etc) with certain energies to a chosen HDR original file would probably quite nice to have.

I doubt it will happen anytime soon, but still I have logged the request as https://mcneel.myjetbrains.com/youtrack/issue/RH-43958 - hopefully it captures the gist.

I doubt it will happen anytime soon, but still I have logged the request as https://mcneel.myjetbrains.com/youtrack/issue/RH-43958 - hopefully it captures the gist.

Thanks Nathan,
I frankly didn’t even dare to raise that request - I only felt the urge to differ when you said that the sort of of hdr-editing the OP brought up falls in the realm of Photoshop and the like :o).

Simple could be surprisingly much. There’s absolutely no need for “full” editing In the Photoshop sense.
All the tool needed to do is paint whitish dots, even blend modes were a luxury already.

Here’s some more info for Youtrack:

HDR lit product shots which simulate what one does in a photo studio usually don’t work with typical panoramic hdr’s of landscapes or urban environments with dynamic range of several exposures in them. The latter far more useful for games or for architectural shots. Reflections of trees or houses however would look extremely odd (= unrealistic) when they appeared in a rendering of a sleek electronic device, presented on a clean white background.

The goal of such an HDR editor is rather imitation of perfectly controllable studio light sources. One usually starts with an empty (=black canvas) and places bright spots. The final HDR which provides gorgeous lighting for a particular scene / camera angle will be an unsightly collection of whitish dots, drawn in 32 bit colour space. While it may serve as a starting point for similar projects, such hdr’s represent a single frozen light setup. As soon as one changes the scene or camera, lighting needs to get adapted - as it is required in a photo studio too.

The whole motivation for such a tool is a combination of reasons: The most important one is setup speed and control. Nudging virtual light sources on a 2D canvas is way faster than accurately positioning “physical” light sources in 3D space, particularly so in Rhino where on can’t even parent a light source to an object. The second reason is output speed: HDR lighting renders faster. The limiting factor for such a tool is that it can’t respect realistic light decay - all light sources sit on the environment sphere and therefore are equally far away. It’s the general limitation of hdr-lighting. People still create very well lit images with that method.

For the programming side it would mean that one needs to draw and transform circles and rectangles on a 2D canvas which represents an unwrapped environment sphere (could all happen with default Rhino-tools) These shapes need a 32 bit colour fill and editable gradients. For interactive preview fed to the renderer one likely needed a low resolution HDR (when content with the result the user would output a larger version of that image). This already would be very helpful.

A better version of the tool would allow driving the light dot position on the environment sphere by clicking a spot on the model. The light would then get placed normal to the pick point on the environment sphere. That way one would gain great control about highlights. Rhino actually has an old tool which does a similar thing with physical lights (edit light by looking).

The previously mentioned HDR Light Studio is an immensely expensive tool (for what it actually does) and it doesn’t even allow driving the lights by clicking the model in all of its plug-ins. A native Rhino tool which could be used straight away with every render engine had a great advantage.

Yup, I get all that - it’d be nice to have indeed, I just meant that I don’t see it happen any time soon, as this requires developer resources that currently are already tied up. That is why I logged the issue, because I do see the benefit

Thank you Holger for taking time to write that down! I personally also really hope McNeel could make this happen - soon (V7 WIP).

So what’s your experience with HDR editing? There is integrated editor in Keyshot, then there is HDR Light Studio with Rhino plugin (https://www.lightmap.co.uk/). Is there anything else you know of?

I’m a V-Ray user so I only download pre-made HDRis, sometimes I just give them a little tweaking in Photoshop, which seems to be very limited in work with more-than-8bit images.

There is integrated editor in Keyshot

This one is limited to Keyshot users and requires working outside of Rhino.

then there is HDR Light Studio with Rhino plugin (https://www.lightmap.co.uk/).

This product is good but has an insane price for something actually pretty simple (four digits for perpetural or hefty rental prices last time I checked). One also should note that it doesn’t have a Rhino-Plug-In. The program only supports Vray for Rhino. I don’t consider this a robust enough connection, it could get discontinued or broken with every release of Vray or HDR-LS.

Is there anything else you know of?

Not in the Rhino context, no.