Actually it improved the performance, but not fully solved the problem. I’ll wait for regular release fix then.

I’m having the same issue. Tried to find a solution but all i found, was several people reporting the same problems.
My conclusion so far is, it only happens only when Grasshopper has been open since I started Rhino.

Here are other posts for this problem:

hey @AndyPayne, thnx for looking into this! yes, ghosting shows up in all view modes. just tested on the latest release as well. I made a dummy GH testing file. just draw box and run the player.Ghosting_Test.gh (5.6 KB)

When I use a grasshopper compiled command it stays in cache. This issue is discussed here for the grasshopperplayer usage. I found a trick asking grasshopper to load only once another grasshopper, it works well. But it would be nice to have the same behavior (new solution once) for compiled scripts by default. I tried to compile the script in Rhino WIP but the problem persist. It is very annoying to have unexpected behavior from a script hidden in background.

How to close or disable grasshopper player preview after use? - Grasshopper - McNeel Forum

Hi there, I was experimenting a little with Grasshopper Player. I don’t know how exactly explain it. After using the Player the preview of the Grasshopper elements don’t disappear even after closing Grasshopper or turning off all Grasshopper previews. There is either no GrasshopperPlayer command active. Is there a way to kind of refresh? Kill the process? [image]

Is there a way to get someone from McNeel to have a look into it? They thought they’ve fixed it with an older release, but it still exists.

I bypass redraw, so preview is set to off
and Yes should by fixed as quickly as possible.

Is there a way to get someone from McNeel to have a look into it?

As you might have seen in related threads, we have looked into this but haven’t been able to reproduce the issue. I’ve been trying again now, using different versions of Rhino on both Windows and Mac, using several of the definitions that are referred to in those threads. I can’t make this happen. If you have detailed steps and a definition, I’m happy to try more…
-wim

I created a simple file. To reproduce follow these steps:

Me with clean Rhino and Grasshopper Player:
only the actual choosen objects are previewed 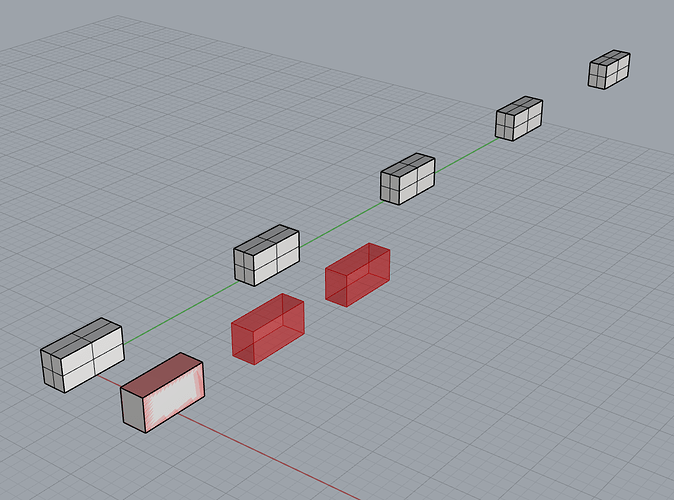 open grasshopper - an all the last states are previewed (thats what I mean by ghosting): 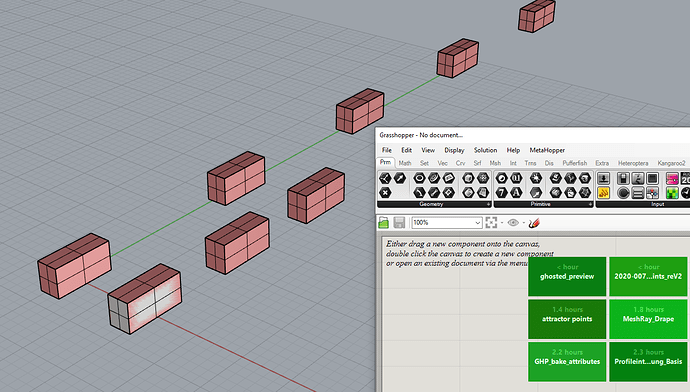 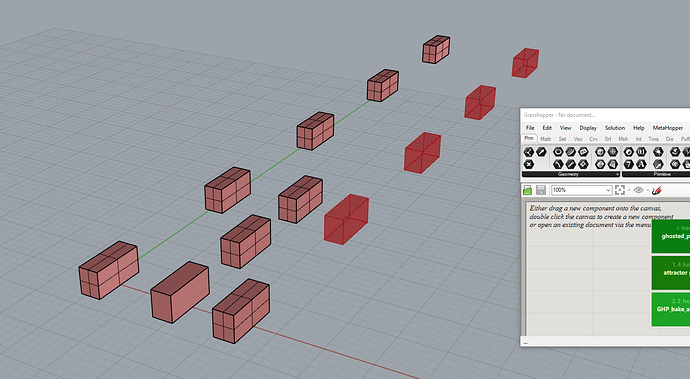 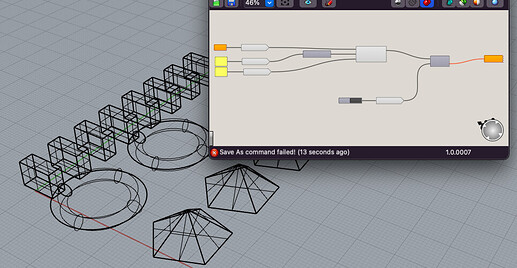 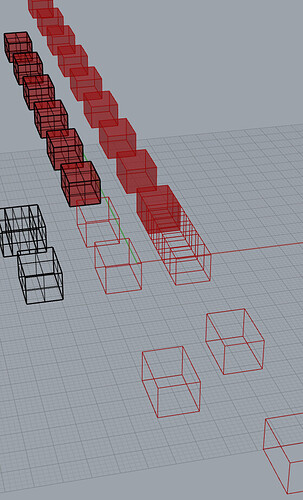 First I thought it’s because I usually don’t use a context bake and just jump out of the process.
Or because of the use of certain plugins…
Or because it doesn’t like blocks…
But neither exclusion helped.

But i’ll keep trying. As soon as I might find something, I’ll let you know

@wim
Open Rhino (here 7.13)
Open Grasshopper and close Grasshopper
Run GhPlayer (example by Jess) definition
and other when values are entered, there is not automatic redraw refresh, except when I click in the window.

@interkinactive
Preview was set to off, value input does not generate visual feedback, sadly
ghosted_preview.gh (6.4 KB)

I set a relevant example using only python script in this thread :

Here is another version of this grasshopper using python script instead of an external plugin text_only_once-ghp_cache_issue.ghx (78.7 KB)

I made a GrasshopperPlayerOnce Rhino command if you need. Have a look here:

Loading a gh file, executing it and harvesting its data Grasshopper Developer

I tried to translate the script Runner in Python language but it doesn’t work. Can someone help me ? I’m close… Runner.gh (5.5 KB)

By the way, for a V2 I succeeded to adapt the c# script in a ghpython, it would be great to make a python script directly. If the issue is not solved until then

Hello, the problem of ghosted preview is related to Remote Control Panel
If you close it from Rhino or Unselect it from Grasshopper > View the ghosted preview disappears

there is not automatic redraw refresh,

Confirm it here, thanks @seghierkhaled
But there is not automatic redraw refresh,, example when i enter new distances then for display refresh I need to move the viewport briefly. 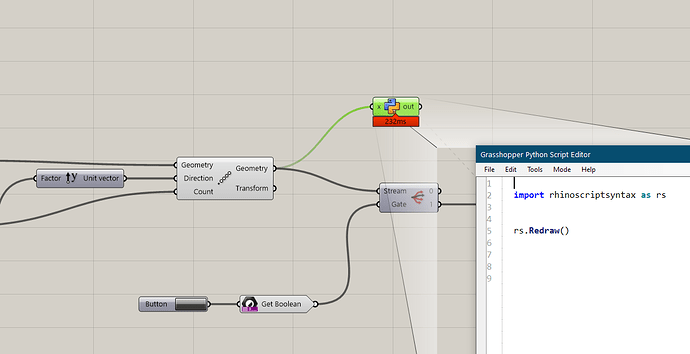 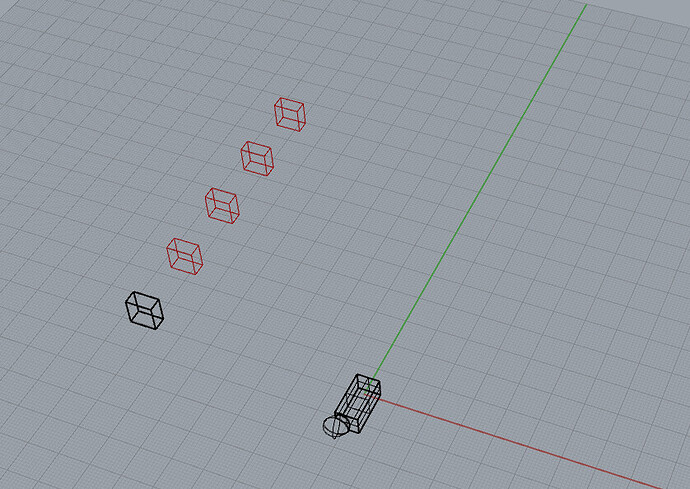 I am having the same sort of issues. A sort of memory caching of geometry which I would not expect.
In the video below you can see the following steps: 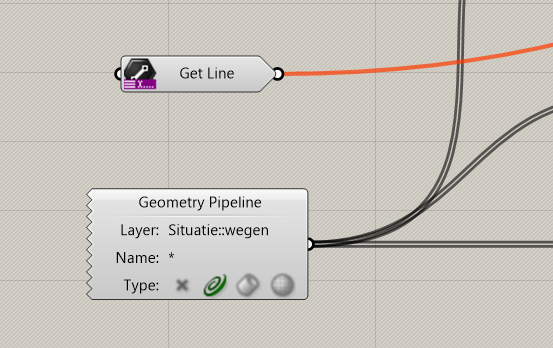 I am having the same sort of issues. A sort of memory caching of geometry which I would not expect.

This issue is on the list as RH-66768 and was fixed in the WIP on Windows by providing a setting at the bottom of the Document Properties dialog in Grasshopper: 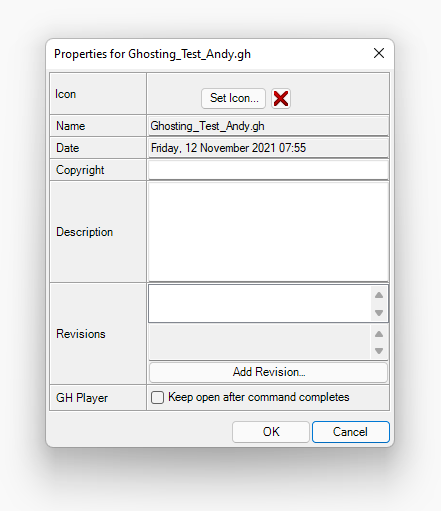 That issue is still open because it hasn’t been implemented on macOS yet.
HTH,
-wim

Hi Wim, this option is very useful, please consider to allow the remote panel when running grasshopper player too.