but …i think need i/o name.

Sorry, not yet. Component (user assigned) names are not drawn at all yet, and input/output names cannot be switched yet to full names.

Super exciting. Congrats David. All the best for GH community. Gretings from Brazil.

Everything is new, not a single line of code is shared between gh1 and gh2.

To get Rhino 8 Wip, you need to own Rhino 7. Then you can participate in the testing process: Welcome to Serengeti

this is awesome! excited to see where it goes 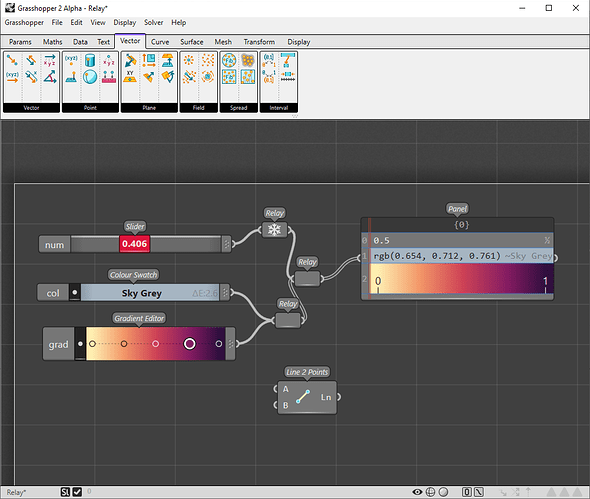 wow the new gradient editor is beautiful and diverse. now false colour images can be more than

congratulations @DavidRutten for reaching this huge milestone! ui looks absolutely beautiful and well designed. can’t wait to try it and at some point switching over to it. sadly no time right now.

Would be to much can make some kind of textures like in substance designer.

Don’t forget to provide us with F4 and F3 shortcuts, I use them every 5 minutes.

I would love to access the node code to make prototyping in gh2 easier to transfare to other languages.

I don’t know if totally relevant to your comment but I’ve been switching between Node-Red (for event based industrial automation) and Grasshopper a bunch this season… and I keep reaching for a code node to enter script. I realize that’s there as C and Py support in gh1 but it feels clunky to access.

EDIT: Some comments redacted. I realize that rather than missing functionality, I’d been conditioned to feel there was a lack as a result of UI. Perceived/experiential barriers.

and I keep reaching for a code node to enter script.

Got a video or picture of how Node-RED does this I can gawp at? 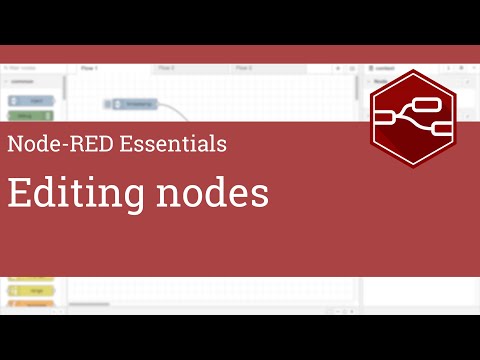 All comments below, humbly submitted.
I simply can’t give enough appreciation for gh in the first place.

Hopefully this gives a feel: Node-Red: Function Variables - YouTube
I pulled out C# and Py scripts on screen again and had a poke around. After thinking about it, I feel the key aspects are flow and responsiveness.

The video doesn’t illustrate it, but Node Red (js) functions are accessed by a double click, launching the docked editor. The window can be closed with the close button OR simply by a single click to the board to remove focus. All changes are automatically saved. Crucially, it’s this single-click-off (anywhere) that creates a feeling of flow… I guess it’s being able to brush something aside rather than demanding the concentration to find the specific button to remove it.

In gh1 we’re forced to use the (small!) ‘x’ or ‘OK’ button (top right) to close python code editor windows. Curiously this is inconsistent with C#, where I see there’s the option to minimize. Also a larger but equally un-flowy ‘OK’ button.

Getting into the code components also… very specific about where to click so as not to just get a search dialogue. I’ve found myself in a click frenzy just trying to land the right spot at a given zoom level. Flow killer, concentration grab; this again is where NR I think feels effortless by comparison.
Remember most other gh components don’t have a click-into function. I think scripts should be treated differently. Even if the click behavior could be modified to accept a click on an input/output region as equivalent to a click on the whole icon.

Could go a step further and provide a global toggle to launch the (docked!) code editor for any selected script. Removing need for double click. For programming sprints this would be a dream. Single-click-in | Single-click-anywhere-out … hard to get less clicky than that.

I think I’ve personally really enjoyed a single location for the editor. This should always be optional, if possible. Combined with the comments above this cuts the cognitive load required to initiate the task, and to task-switch. Leaving focus for the task of programming or debugging itself.

Easy for me to say, since you’ve graciously managed to build multi-language support into the base product. But ideally there’d be a universal editor UI.
Again, cognitive load.
In Node-Red, Javascript is running natively. Other languages require plugins and some futsing about.

I note that each time I open the editors in gh, many of the window layout settings are reset to a default. There’s a risk of having to reshape the editor every time.

A mentor of mine said something to the effect of ‘the perfect tool is invisible’ - we’re not here to spend time using tools, we’re here to turn ideas into reality. Observations above fall into that vein.
As a new and developing user - UI access to code components, felt prohibitive to me.

Cheers. Can’t wait to get the alpha downloaded.