Work assigned me a new laptop, and I started using Rhino 6 with it.

All programs work pretty smooth, but as soon as I launch Rhino, without actually doing it, just opening new empty file, cooler fan decides that the laptop is on fire and starts turning on max speed.

No other program does this. Even resource intensive programs while large models are open.
This also causes performance drops in other programs, like excel, word, if I have Rhino open.

I’d understand if this would happen while doing large models/GH definitions, but simply opening program?
I have Dell Latitude 5590, it has for example new i7 cpu, it should handle these tasks without overheating.

Does the taskmanager show high CPU and/or GPU load for the idling Rhino instance?

However, fan is turning really loud.

As soon as I close Rhino, it becomes silent.

CPU usage less than 1% not sure for GPU, memory around 445MB or so.

not sure why this difference exists.
I think battery drains a bit too, this is more of an issue for me.

Not sure if it’s Rhino or if the laptop just starts feeding GPU.

I have seen the fans spin up on my Dell Precision M3800 for when I open Rhino 5.0, this is due to the Nvidia Graphics Switching (Switching from the Intel Integrated GPU to the Dedicated Nvidia GPU). That would explain Toshiaki’s case if he has a nvidia GPU.

For Janis, I see that the Latitude 5590 does not have a dedicated nvidia GPU, so the graphics switching would not be the culprit. If I were you Janis, I would take a look at the background processes in the task manager when the fans spin up, and look for high usage of CPU.

Keep in mind that you might benefit from a driver update to your “Intel Dynamic Platform and Thermal Framework” for your chipset. This driver controls the thermal throttling of the CPU and fans.

My laptop has GeForce MX130 gpu.

IT tried to adjust settings so that intel hd is always being used, but that didn’t help.
Maybe they can somehow disable it completely, but that doesn’t feel like correct answer to problem.

You can see in the picture below, that there aren’t any resource intensive tasks. Computer isn’t under load.
But feeling is like, the computer is trying to render a movie, everything else is lagging a little.

Close only Rhino, and everything becomes smooth. 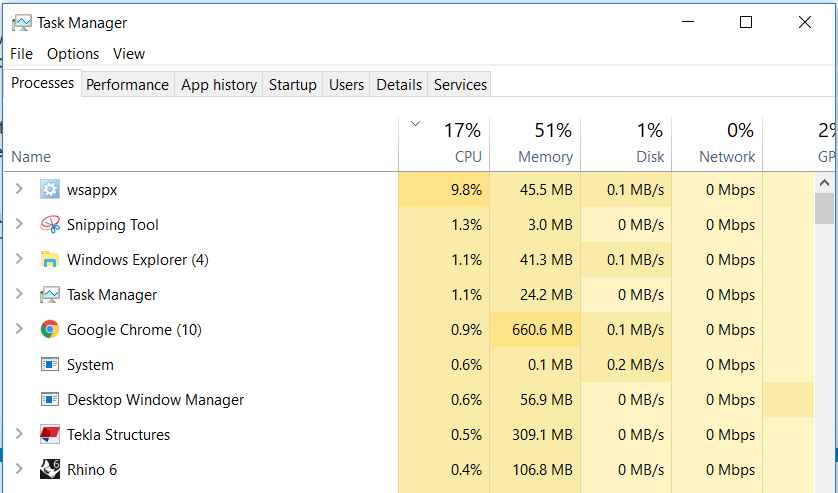 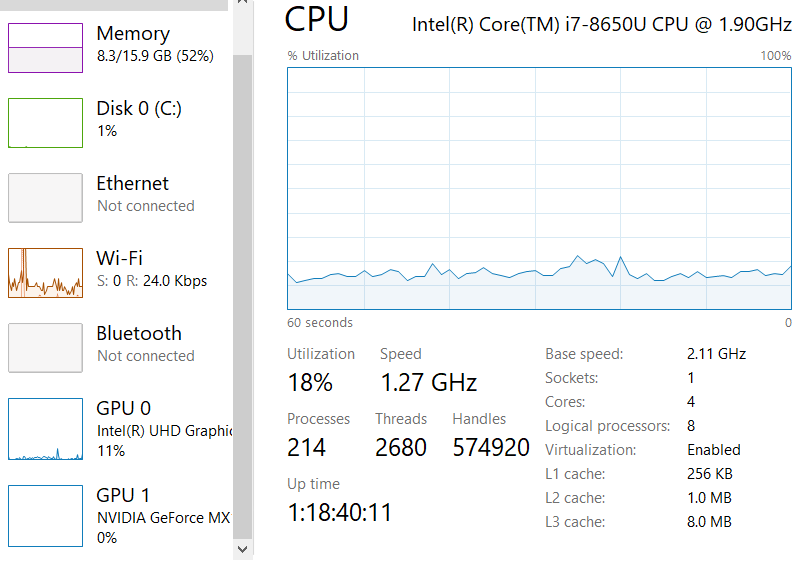 Do the fans spin up to high RPM with “Rhino 6 in Safe Mode”? Are all of your drivers up to date?

Anyone in mcneel have a geforce gpu laptop that
they can check?

Not at our Finland office, other than I think through one bootcamp case.

Safe mode works good.
Also, my drivers should be up to date. (March release).

I found that there was an option for laptop, which gpu to use when launching program, and that also worked fine for non-safe mode. (Choosing integrated graphics), so GeForce gpu combination is definetly at fault. 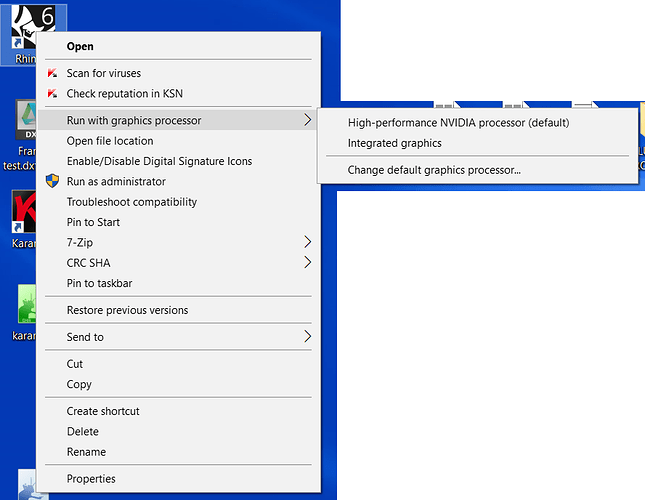 Since I mainly need only Grasshopper, I think I can do without GeForce gpu, but others might not be so lucky.

I found that there was an option for laptop, which gpu to use when launching program, and that also worked fine for non-safe mode. (Choosing integrated graphics), so GeForce gpu combination is definetly at fault.

That’s good to know.
I might try that on the go sometime.

Still wonder what’s causing the GPU running that much tho… windows? bios? rhino?

How’s the bootcamp one?

@marika_almgren, can you check on monday if idling Rhino 6 is resource intensive in bootcamp?

@Toshiaki_Takano I apparently misremembered which MBP in our office has GeForce, which not. The bootcamped version has only Intel GPU, the GeForce one has only MacOS.

Thank you @nathanletwory for checking.
Anyone else in mcneel who has something they can check?
Actually, this weekend I was using an intel Atom based 7inch laptop, and the battery lasted quite a long time…
Something is up with geforce gpu laptops.
It may be unnoticed for many if they have gaming which usually is intended to use with ac adapter anyhow…

I have an HP envy laptop with a geforce 740m and don’t have any problems with running hot and yes Rhino is using the geforce gpu.

Hmm, could be issue with DELL laptops with GPUs… .
or something in the Windows setting?

I can’t find the option " Run with graphics processor > "

I can kill the GPU from device manager, I suppose, but I’d not like to do that every time…

Toshiaki, you would need to enable that option in your nvidia control panel:

great stuff! Will try it tomorrow.