I am trying to create a paving pattern. First I started with a circle and offset 2’ throughout the area. Next, I placed a curve perpendicular to the next circle and then arrayed that along the curve. The result is the image below.

I can’t figure out how to efficiently turn each paver into a surface. Extruding the curves and splitting a surface didn’t seem to work. It would also be great to offset each one 1/8" if possible. Any ideas?

This will be difficult/tough on your pc in any case.
How about a split?
Use the curves to split the base surface directly?
Next you could try to extrude all the small surfaces.

However, what is it you want to do with it? If you want to use it for vislualization, you might better be off with a bumpmap for instance.

As a quick test I took you inage and used it as a bumpmap.
If you go that route, you best make the image all white with black lines.
You will need to apply a custom planar mapping on the plane to be able to position the mapping. 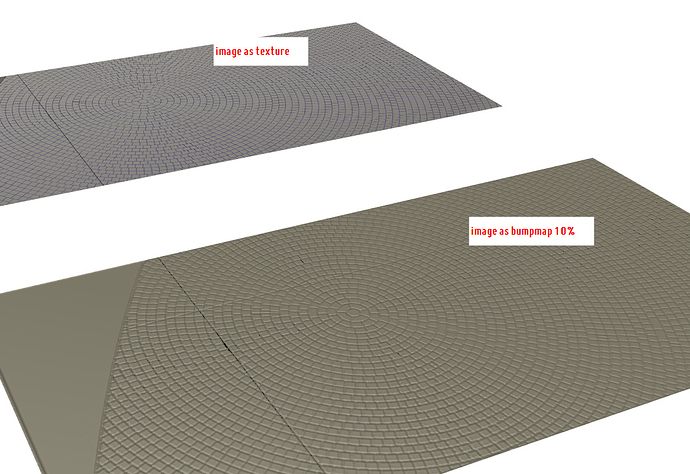 Thanks for the response, Willem!

I have tried splitting the surface, but have yet to be successful with it. Because it is a very large plaza space and relatively small pieces it takes quite a while to process and has so far not successfully split the surface.

My working idea was to split the surface, use those pieces almost like a mosaic, texturing some a darker color of stone to create a pattern, and rendering the scene. I’m worried about the file size as there are thousands of pavers. So to answer your question, I plan on using it for a perspective rendering.

Your bitmap idea is interesting. I don’t think I’m familiar with the process. Could you tell me or point me in the direction of how to create one? The images you created are the effect I’m trying to accomplish ultimately, but with a stone texture and some pavers darker than others to present the pattern.

Could you tell me or point me in the direction of how to create one?

You could just make a screenshot of you curves on the plane. Make sure you get black lines on a white background. You can do that by setting the displaymode to have a white background and hide everything but the curves that you set to be black.

If you capture a view port with the command -ViewCaptureToFile Note the “-” in front
You can capture an image with more pixels that the viewport by setting the scale.

One you have this black and white lines image you can use it as a bumpmap.
In an image editor program (like photoshop or gimp or other) you can than also create a second image to represent the stone texture, yet that will be more manual work.

Here is a quick exampke of what I propose: 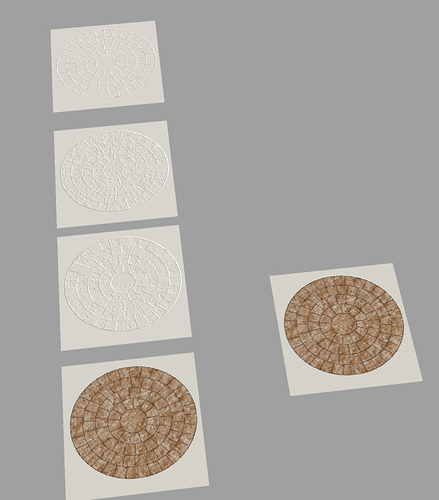 @ByGeorge Not sure if this is too late to be useful, but if you are into scripting, then you have great flexibility to generate patterns similar to what you are after. I attached a Grasshopper definition (uses PanelingTools plugin for Rhino and Grasshopperas well).
circular_pattern.gh (14.0 KB) 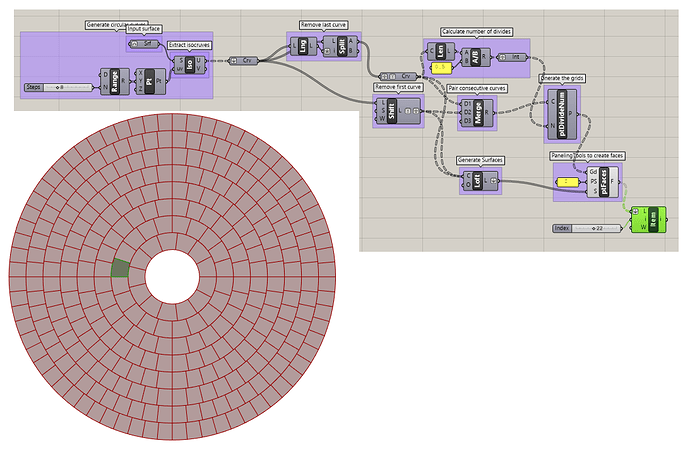 Never too late! Thank you very much for your insightful response. I sincerely appreciate it!