I will be using Vray for Rhino (I’m moving from another app with vray on mac)
I do 3D Set Design, and hopefully will move into doing Product Design and ArchPrevis. I

Info/suggestions VERY appreciated, especially if you have specific knowledge with regard to this.

See if this helps:

If you use their comparison chart:

I’ve had Dell workstations in the past, they are very good, although if you are working primarily in Rhino you are paying a large premium for Xeon and Quadro graphics.

You could achieve a noticeable increase in performance going for a faster i7k series CPU and GTX graphics.

Wow, thanks AIW! Will check the links, but thank you for your quick decisive reply!

Thanks for the reply. Are you suggesting that the i7K with GTX is maybe “fast enough to get the job done” or that they would be faster/more efficient than the Xeon/Quadro?

I’d say the i7 and GTX is fast enough but I’m guessing the AMD and Quadro are the only choices - have you checked out Holomark 2 Released! ?

I’d second spending the the saved cash on SSDs and more RAM.- either 16GB or 32GB if you can afford it.

@MarcusStrube is right; rhino operations won’t be helped by lots of slower cores (like any of the >4 core Xeons).

However, VRay uses multithreading; so more cores will help unless you will be able to use their gpu accelerated algorithm.

For me; I mainly use gpu raytracer; so I have an i7 with boost to 4.2ghz. When I have to go to a CPU renderer it’s still faster than my workstation in the office (3.5ghz boost).

If your biggest time-sink is the render time; go for a fast i7 and get a render node

Wow, so surprising that the i7 would be faster than Xeon! How is that possible?

Anyone out there using Vray with Rhino? Was going to buy this today but maybe I need to wait and do more research…

Oh sorry Prehabitat - just realized you DID write about Vray!

Dang, I need to look at the specs of this machine. Maybe I could post them and get specific feedback on options?

Wait a month, prices will fall because AMD will launch a new Ryzen processor which seems to be very fast (finally)

Ah, thank you Violine, but can’t wait that long!

Thanks, Prehabitat and @MarcusStrube! Here’s my new setup idea. Would you mind taking a look? (FYI, the only options for RAM are 64G ECC and 64G Non-ECC (?); and no lower GPU than M4000M) 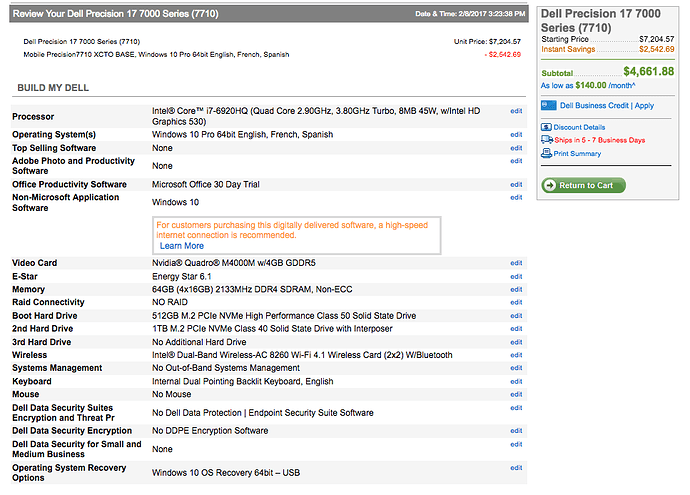 If this is your own money I’d suggest rolling your own. You could build that computer yourself for about 1/3 of that total. If work is paying… go nuts! lol

FREEKEEDEEKEE - Thanks for the thought. I woul dget no Customer Service anywhere for the computer that way, correct? I built a Hackintosh, and while it saved a bunch of money, it was up to me to fix anything…

There are other PC builders to consider, who offer support but also more customisation.

Boxx workstations are quite compelling… Offering desktop CPU and GPU’s if you really want power! Lots of configuration, it’s just a shame adding options on top of the basic build increase the price so much.

Not on commission btw…

Absolutely. I guess I’ll sound like the supreme fanboy here, but I built a couple of PC’s back when I thought I knew everything. I did know enough to achieve success and building was part of the fun. But as you point out it took time both in building and maintaining. Time I could have used for other things which eventually became more interesting. Shortly thereafter Dell came into the picture and my employer decided to deploy them throughout the company (thousands). I was one of the recipients. Through a decade or so of experience I found them to be conservatively designed yet high performance and very reliable. I decided to stick with them for my personal use as well and over the last couple of decades have had 4 workstations and a laptop (which I bought in 1998 and it’s still working). Dell support has been very professional. One point I perhaps should mention is that I have always purchased as a small business, and I think the level of support may be better in that you can get more quickly and sensibly past the “is it plugged in” type of question if you do, in fact, have a higher level of technical savvy.

The downside of having always used Dell is I have absolutely no way of directly knowing anything about other suppliers like HP, Lenovo, etc.

Thanks for the reply, AIW. Stability and service is definitely a major consideration for me. Like you said, would rather spend my time working in my software rather than taking care of my hardware.

Thanks so much, I’ll take a look at that…