Could the WIN UI be like the MAC as default?

Hello everybody,
as Rhino trainer I’m having more and more students using the Mac version.

The issue is that the interface of the 2 versions are quite different (listening to my student) and they get confused while I teach them the other version.

Teaching the Win version drive Mac student to not being able to find the options (I know sound stupid but new generation are different).

I can’t split the class according to the laptop they bought… c’mon!
And maybe they have a Mac and the school lab is on WIn.

In general the Mac UI is a bit more modern and it looks nicer.

@TEACHERS send your vote here if you agree!

In general the Mac UI is a bit more modern and it looks nicer.

I think that opinion going to vary according to the person…

The issue is that the interface of the 2 versions are quite different (listening to my student) and they get confused while I teach them the other version.

Yep.
I argued back in 2007 when Mac development started that this would be a nightmare for teachers and anyone else who is working in a mixed environment - which currently is way more than the ‘few isolated cases’ originally argued - plus it also means doubling a large number of training resources, tutorials etc. Anyway I didn’t win on that one, so here we are.

That being said, I have had to teach mixed classes - there are a couple of ways to go, but some of them depend on resources you have. I was lucky to have a university lecture hall equipped with a dual-input beamer system, so I brought my PC and my Mac and did alternate exercises on each one.

The alternative is actually to force Mac people to use the Windows version via Bootcamp or even Parallels/VM) and teach the class on Windows Rhino - the Mac people will learn Rhino at least, then they will just have to get used to the Mac interface later. I do this currently with my modelmaker apprentice classes, but most of them have Windows at work anyway, even if they have Mac at home.

Going the other way (teaching with a Mac OS running on Windows) is as you well know not possible - well maybe it is possible via a VM, I have no idea.

I think trying to create a more Mac-like interface in Windows Rhino will not help much, you can do some small mods to make it look a bit more mac-friendly, but cannot fundamentally change how the Windows Rhino interface works - any more than you can change the way Mac Rhino works.

There is maybe one last way to have everyone’s interface look more or less the same… Teach full-screen only and have everyone type all commands.

For me the only missing part is the options.
In win you have command area while in Mac you get button side panel.

The other is just a matter of change the default position. 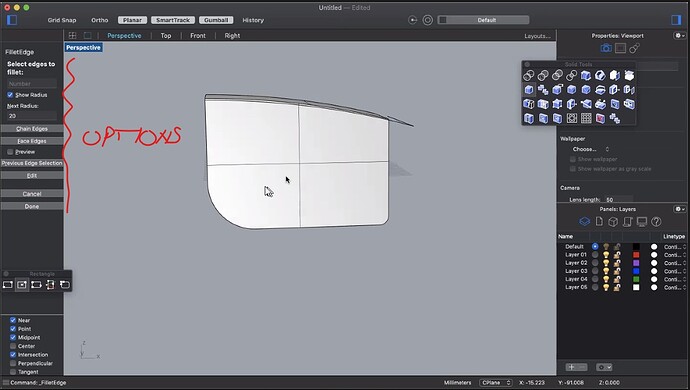 Could win version have the same Options panel with buttons like mac?!?!

Or did I get that wrong?

hi hi… I like Win more but you can’t fight WindMill, right?

You like the Windows command line more than the Mac command options panel, but you want to change the Windows UI to be the style that you like less?

That was a joke! (sorry if is confusing).

I’m not a fan of anything, I’m just looking for solving issue in class while teaching and try to put student in the more comfortable situation to concentrate on learning 3D modelling.

In some classes I’ve people that barely knows what’s an orthogonal view.
Today student doesn’t know that they can open files directly Rhino instead of closing and reopening teh software each time.
young generation have different background.

Having the options as button in Win may fill the gap, a bit at least.

No, please, dear Holy Entity, for all that is good, decent and pure in this world, let’s NOT go there!

I know that change is a pain and we go out of our comfort one, but, please is a serious problem, so could you be more pro-active and propose a possible different solution?

I’m not a fan of anything

I agree that both systems are far from perfect when it comes to command line options. The Windows version is nice and light, but unless you know to type on the command line you can often miss that the options even exist. The Mac version has its own set of oddities. For example, I seem to accidentally cancel out of the offset command all of the time on Mac and I can’t figure out what is wrong with my muscle memory to cause this.

Sorry, it was meant mainly as a joke on the whole PC/Mac debate - and as a former teacher, I know all to well the pain and frustration coming from teaching students with different toolsets - both in terms of hard-/software and the mental toolset as well. I must admit my experience with the Mac interface is fairly limited, since I’m currently (and have been for some years) in an all PC environment (at least in terms of product design/modelling). My main gripe with the Mac interface is that it stacks the prompt vertically. I don’t know if this can be changed in settings? Having used Rhino since the beta days, I’ve grown so used to the horisontal flow of the command prompt, that looking to the left the whole time is very awkward to me. Other than that, I actually think the differences are not too critical, but again: I don’t have to teach it, and I fully understand your frustration

looking to the left the whole time is very awkward to me.

That is indeed not very great, but you can have the command options as a floating thing, and it goes away once you hit enter.

As someone who teaches students who use both platforms, it would be a godsend to get the option of a conventional command line in Mac. The rest of the interface can be arranged to look similar enough to windows to get away with it.

Maybe Mac people would like a floating command bar on windows too?

No, please, dear Holy Entity, for all that is good, decent and pure in this world, let’s NOT go there!

Totally agree with Jakob here, MAC students can use Parallels. Windows version is the standard on most professional environments I’ve worked with, plus (IMHO) each year Apple is making their models more beautiful, more expensive, but worse in terms of performance.

I honestly don’t understand why McNeel hired different UI designers for Mac. Its the same piece of software and it looks completely different. I get Mac has a special aesthetic, change the icons if you wish, no the whole UI. The worst of this I experienced in working groups, you wanted to help someone do X, they had a Mac… oh sorry can’t help you I don’t know RhinoMac. Maybe call it RhinoMac instead of Rhinoceros

My understanding is when development of Rhino for Mac started the decision was made to develop a new UI for it which would follow the Mac “best practices” instead of being close to the Rhino for Windows interface. I don’t think that decisiont had anything to do wth who designed the interface.

“…In general the Mac UI is a bit more modern and it looks nicer…”
hm…, sorry, no

Mac version has nice menus for all tool options, instead of the horrible DOS command line you have to squint at on Windows, so that’s one thing I’m envious of.

Everyone jumping down my throat for wanting to hide the command line for new users… well guess what I just found out what the MacOS version does by default?

And, holy smokes, the Mac UI is everything I wanted for Rhino. Just look at how intuitive and clear this is compared to the 1995 looking Windows UI (also hello proper dark mode): [image] [image] Ok, so having a scrollbar here isn’t the best, but still a huge step forward, and much of the work seems to be done already…

My understanding is when development of Rhino for Mac started the decision was made to develop a new UI for it which would follow the Mac “best practices” instead of being close to the Rhino for Windows interface.

Anyway, this is probably another area where McNeel can’t afford to make any changes.