I am a big fan of the hidden power of _setPt Command.
it would be really great to have a Setpt-Variant / Option to use Polar-Coordinates.
the command should have options similar to setPt

AND additional it should ask for center and target point…

regarding the logic - i think it would be a very simple command, but it would allow a great and simple Controlpoint alingment to planes or Circles and other nice workflows…

and it would be really cool to edit SubDs…

in the interest of clarity, can you show some example of what you are proposing here? I like the suggestion, and want to make sure I get it captured and written up correctly.

great - thanks for having a look at this…

above a simple example of some CV s, that should get aligned.
in this case Sub-D, but it could be some CV-clean up of a sweep / edgeSrf or whatever.

the command would do exactly the same / corresponding to Setpt:
(pre)select some (control or edit) points
dialog with
a checkbox for radius, angle, height.
a choice between cplane or world

the follow up dialog will ask for center and point / radius.

and maybe each of those choices could get an option “distribute / equal spacing”.

and also i have to admit my motivation is a bit intellectual … if their is polar-coordinate input, their should be setPtPolar…And i am sure it is quite a simple / basic tool, … and as Moving CV s gets more fashion (again) with Sub-D, maybe it s worth looking at some other good old friends like MoveUVN…

Would the origin and orientation for radius, angle and height be relative to the active viewport’s Cplane, the same as entering polar coordinates?

Would the origin and orientation for radius, angle and height be relative to the active viewport’s Cplane, the same as entering polar coordinates?

if the users selects the origin / typing 0 instead of picking a center-point → YES.

it would be great to select the center-point as radial alignment is not always around 0,0,0

Although different from what you are asking for, there is a gumball trick for doing this.

1.relocate the gumball to any of the points you want to align to- (I have a hot key set up for the GumballRelocate command, it’s super useful, and set your gumball to snappy dragging so it respects osnaps)
2.ctrl+rotate the gumball to match your desired alignment (make sure to hold ctrl first, then rotate gumball)
3. click a scale handle and scale to zero

check this quick video I put together. 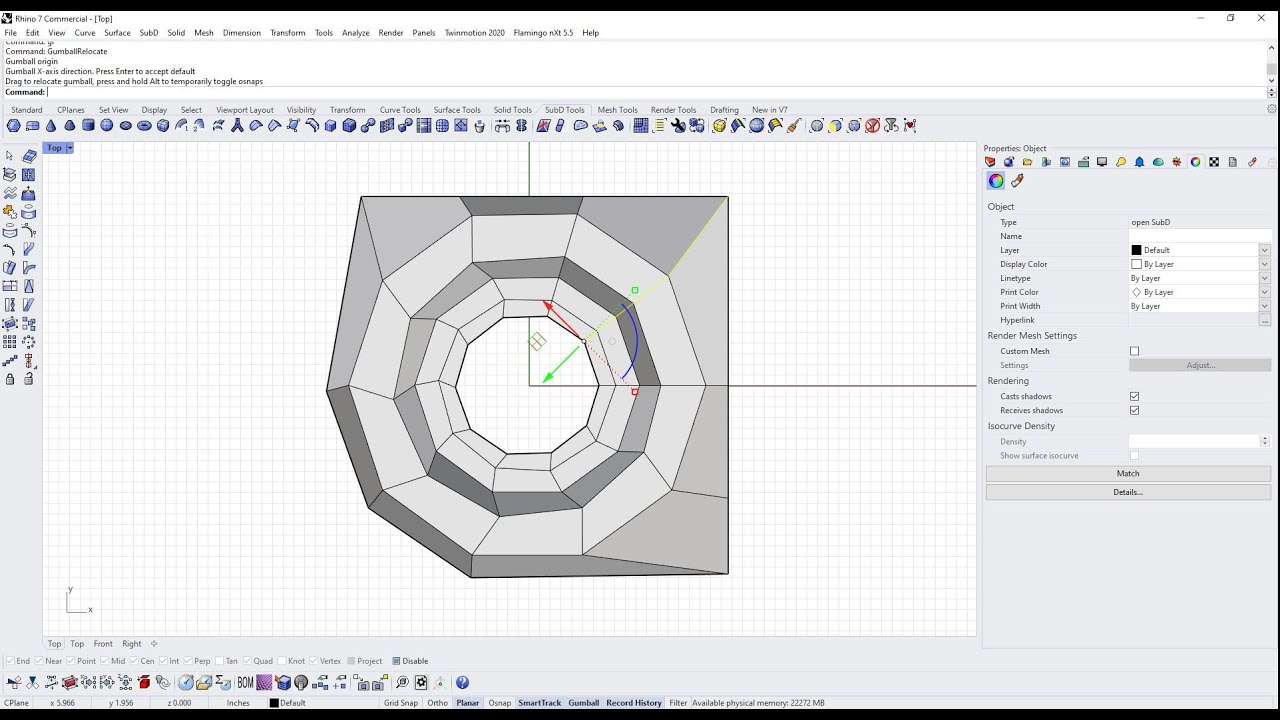 yeah wow … thanks.
(is it possible that the audio is only on the right channel, but not set to mono ? - or maybe my headphone / audio setting sucks… by the way, wich software do you use for screen recording - for mac i can really recommend screenflick)

did not know that scale to 0 is allowed for gumball…
it is a pity that Scale-Factor 0 is not allowed to be 0 or negative for _scale1d and Scale2d.
But setpt can handle it.

my workarround is a “little” macro: preselect the objects… klick twice:

but nice to talk about thinks like this… it would be cool to have a “last center” option in the setPtPolar command.
(similar to “last axis” in some rotate commands…)

many thanks, have a nice weekend, -kind regards -tom

I usually post process/ edit these and convert from mono to stereo (my dac encodes in mono) , but I just cranked this one out quick- I use Debut for windows, or quicktime on the mac, and premier pro for editing.

@Tom_ for subd circles, you might want to check out the script I posted here

I want to get a more circular end from a _MultiPipe. The idea is to transform align the vertices to a circle. But the vertices are away from the circle, even those that were already on the circle. What’s wrong, or what do I do wrong? Align.3dm (98.3 KB)

How is that toggle SubD< > Low poly toggle tool coming along? SubD