Rudimentary struggles here, I’m trying to convert a pattern of curves (arcs and circles) into a water-jet cutting file, so I am offsetting these curves to have thickness and then removing lines of overlap.

My initial attempts involved creating boundary surfaces and joining those breps, but I found myself up against “empty boolean sets” and surfaces that just would not join. I’ve looked into the error messages, but couldn’t resolve it. I’ve investigated the forums, found similar problems with solutions that didn’t work for me, and believe I am overlooking something fundamental.

I’ve found a way, but it is slow for the level of complexity and won’t work for my final approach, which involves nesting this pattern within itself several [~7] times to create a sort of ever-densifying fractal.

Looking for help creating a solution that is more robust with large sets of curves [100,000+] and capable of joining/trimming overlap lines between two final solutions (ie bake, scale it down, bake, and then join those two sets).

Slightly more information in the attached file, thank you heaps!

Thanks for turning me on to MShadow, didn’t know about it! I’ll investigate this, trying sweeping a line instead of a pipe and shadow casting off of that mesh, but I’m hesitant to introduce the complexities of 3d geometry when there will be hundreds of thousands of them…eeek!

If you waterjet cut this, won’t you just get loads of big holes or possibly just one big hole? Like using a normal font instead of a stencil font if you see what I mean?

Another option I can think of is to use clipper plugin, but the final result will be poly-line curves, if that is not the problem for you. 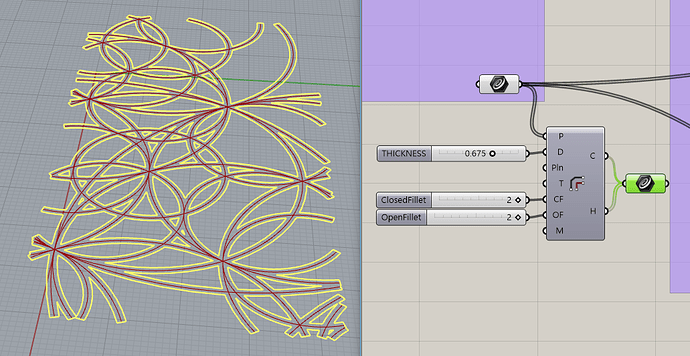 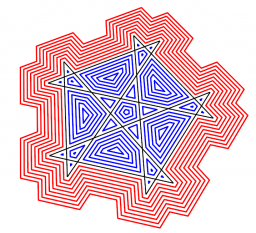 Martyn, please look a little bit closer at the outputs of these definitions, we are basically cutting out a fancy edge and then cutting out a bunch of fancy shapes within that edge. Swiss cheese.

HS_Kim, this looks lovely. I had hoped to do some modulation of the offsets (moving and scaling to create variable thicknesses along each circle), which this doesn’t look like it will support. However, it looks like a very good plug-n-play solution, I’ll check it out with large data sets shortly and report back.

Perhaps you could modify this to include curves and use attractor points to adjust thicknesses.