Can we improve the selection tool options, pretty please?

@dan: So, been thinking (for longer than anyone wants to know) that it would be really, really, REALLY HELPFUL to be able to at least be able to draw a selection loop of desired entities. Limiting selections to a basic rectangular drag window is, well… a real drag.

Just one of those boring little details that would make MacRhino more attractive to those who have to do grownup things every now and again.

I can’t really tell from the Rhino for Mac help file but it looks like the Lasso command is implemented.

@margaret, the help for Mac apparently does mention the command but the entry for the Win version has more information…

Sadly, nope. No workie in the latest WIP (5.3). Comes up as “unknown command”

@margaret, in that case, perhaps the command shouldn’t be mentioned in the list of “Selection categories” at the top of the “Selection commands” page in the help file?

No, no, no… Keep the command there (after adding it, of course)!

(@marlin: Any chance of bumping this up in the queue?)

Thanks, you are right. I’ll remove it from the help until it works.

In 1984, when MacPaint was introduced, it had a rectangular selection tool AND a lasso tool (thank you, Bill Atkinson).

Clearly, I should have have written Party Like It’s 1983. 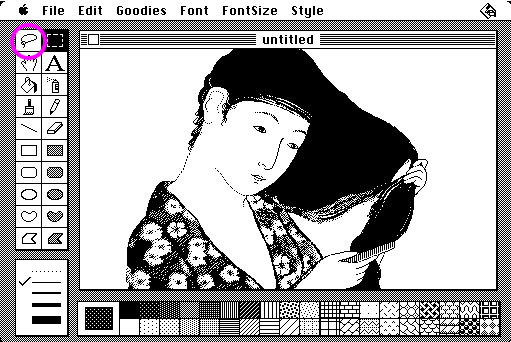 There’s 2d and there’s 3d of course. 3d didn’t exist, did it? Was there even a third dimension back then? I can’t remember.

i think the first 3d cad tool, even with a fancy light pen. Ivan Sutherland’s Sketchpad console, 1962. Sketchpad is operated with a light pen and a command button box (under left hand). The four black knobs below the screen control position and scale of the picture.

Sorry, late to the party as usual…

Yeah, we’ve been keeping selection tool improvements on the 5.x release target list so that someday - maybe - we can reach SketchPad levels of functionality.

No. Neither 3D (or gravity) existed back then and unicorns roamed freely. Such simpler times.

And it was all in Black & White.

And it was all in Black & White.

some pictures may have been black and white, but the memory is always in technicolor

the memory is always in technicolor

Mine wasn’t because Thecnicolor™ is a registered trademark.

Stop teasing. Next you’re going to tell us that we can put a man on the moon!