Are there any single line Fonts?

I’m looking to draw text to be manipulated, but I need single line (open curve) letters,. I’ve spent some time testing to draw different fonts (not been through all of them yet), but does anyone know of any font which is only single line, or at least simple to make into single line letters?

First beta of the fabricator font code library and plug-in have been released, see discourse topic for download links to documentation and binaries. In this post I shall explain how to add custom s…

There is also bowerbird on grasshopper that propose single line

Bowerbird contains some tools for modeling. Download Bowerbird and Examples

It’s been awhile since your request, but I wanted to let you know I’ve created single line fonts for Rhino. I’ve got two available so far, and will be adding many more. They’ve been tested by the development team at Rhino and work in Rhino 3D v. 6 and 7. They can be found at Single Line Fonts - Rhino Versions. I’ll be glad to answer any questions you might have about them. @laurent_delrieu @wim @RIL

@font_maker - you can ‘at-mention’ someone in the text of your to send them a notification of your posting.

Sure thing; thanks for that tip.

they’ve been tested by the development team at Rhino and work in Rhino 3D v. 6 and 7.

They should also work for Rhino V5 for Windows - just not in V5 for Mac, - not the fonts fault, just that the V5 for Mac TextObject command does not support single stroke fonts. The V6 for Mac WIP does.

I’ve just purchased your ‘SLF-RHN Architect’ font - it has solved an engraving issue I was having, thank you

- One question, is it possible to use this font with the ‘text’ command without it creating filled areas as in the image below? I’m after an editable single line font.

OR does anyone know if it is possible to edit text that has been create using the ‘textobject’ command? 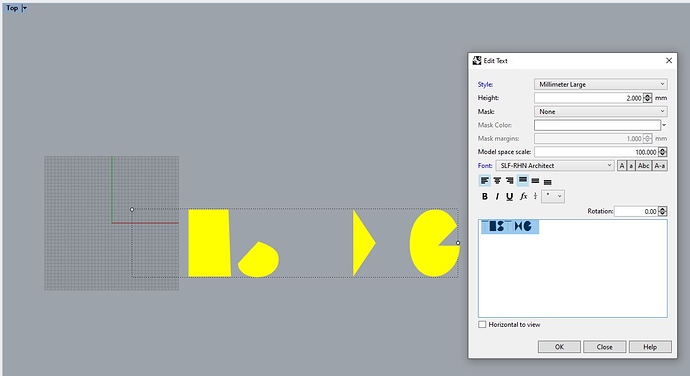 Hey, and thanks for reaching out. What version of Rhino are you using? I’m not seeing the option to allow single stroke fonts in your text box, which is why I ask. That option is available in Versions 6 and 7 for Windows. I need to update my website on the Mac version; whereas it has verbiage about the pre-release WIP build, I believe a later version has been released for Macs. When you say editable text, in what way are you meaning? Looking forward to hearing back from you.

[…] it is possible to edit text that has been create using the ‘textobject’ command?

No, it is not possible to edit text that was created with the TextObject command - that has been turned into dumb geometry. And, as you notice, Single-Stroke-Fonts do not display correctly as a text object in Rhino 6.

This is solved in Rhino 7. Here, you can create editable text objects that render correctly in the viewport. The text still is messed up in the dialog box, though…

@wim will that also be in rhino 7 for mac?

by the way de postbode poetst de pas-gepoetste postkoets, i dont understand, was it not polished or was it polished?

funny mix of allemanic and french influences. dutch is some cool sounding language though

This works fine in Rhino 7 for Mac, yes.

It was polished - I don’t see much French in that one, though…
My father spoke Marols with his parents - now, thát was quite a mix…
-w

Single-Stroke-Fonts do not display correctly as a text object in Rhino 6. 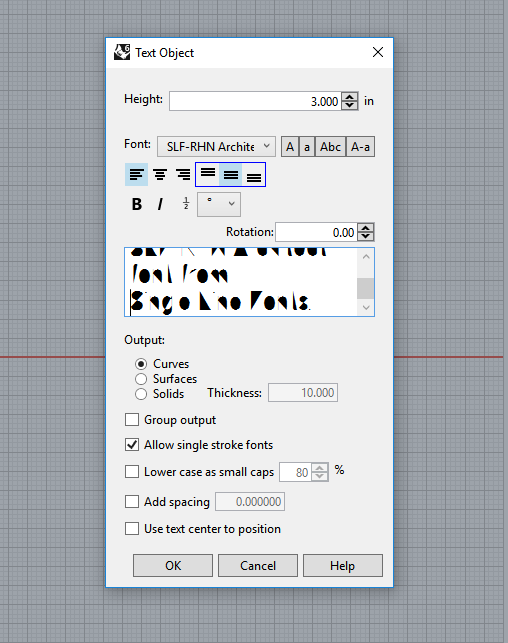 I think the OP was using an earlier version than 6.

I don’t see much French in that one, though…

hmm yes, dutch as it is now has established itself with a lot of words being taken from other languages mostly french. i am not a linguist (merely a hobbiest) but words transferred into a different language are being used for similar meanings, in some cases they even mean the exact opposite. in some cases the relation is not visible because the context has been shifted. in this case pas would mean “not” if read as french … the word “de” would mean “from” if read in french, in german it means the same “die” which then again has the same relation since “from” and “the” both point at something.

but ok from languages back to fonts

Thanks - before I put this one to rest, can you confirm that your fonts were tested with the TextObject command and not the Text command?

At least the RhSS and MecSoft_Font-1 single-stroke fonts are not showing up at all in the viewport as annotation text in Rhino 6.19 here and I don’t remember if that behavior has changed from an earlier version of Rhino 6…
-wim