A bug with Append SubD, and an Improvement to Offset SubD

I’ve been experimenting with Append to SubD and Offset SubD today. I’ve noticed a bug, as well as some things that could make this work better as a tool for construction.

1.) If you use Append to SubD just working with points, and you try to append faces onto existing appended faces with just points, then it doesn’t always fully connect. 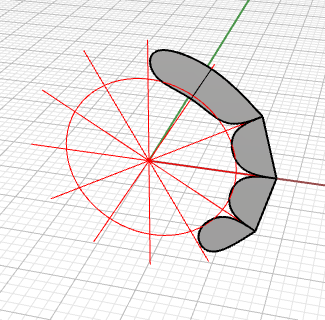 If FromEdge is set to Yes, then they will connect as they should.

2.) If you use Offset SubD with Solid=Yes, then every single edge will have a seam automatically. Can we add an option to turn this off? I can always Remove Seams, but that gets a bit slow and cumbersome. 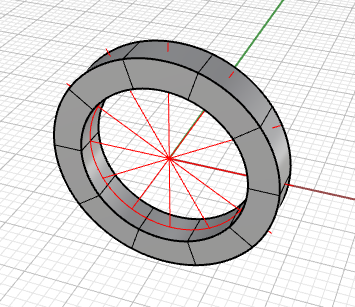 3.) Also, could we add an option which allows us to set the number of edge loops for this offset SubD surface?

then it doesn’t always fully connect.

Point - requires exposure, it is not effective in the time of modeling.

I can always Remove Seams , but that gets a bit slow and cumbersome.

Also, could we add an option which allows us to set the number of edge loops for this offset SubD surface?

Cool! You can join SubD’s as well! Good to know.

Weirdly enough, my other problem with appending by points is only happening sporadically. I’ll see if I can recreate it again for video.

As for your second videos, those are exactly what I’m talking about. Yes, they work, but they’re slow and cumbersome to use. The extra steps and commands are the problem.

Could we adjust the SubD Offset command to work more like Bridge, so that we can set the number of edge loops when we make it, and control whether the result has seams or not?

While you’re here, I have a related question.

What is the intended difference between Append to SubD and Single SubD Face? I know the former is meant to add faces, but so does the latter.

Unless I’m missing something, it seems you could just merge the two commands into one and make for both an easier learning curve and save developer time.

append is just that, a tool to append a face to an existing subd-

single face makes just that one single face. you can stick it to an existing model like append, but append has more options.

I hear you. The name suggests they should be for different purposes. But in practice they have pretty much all the same options. And if you hit the Append option in Single SubD Face’s Command: prompt, you get the Append command anyway. I’ve found in practice I was able to just use Append all the time without ever needing to switch to Single SubD Face (by skipping the “select surface” initial prompt). Hence my suggestion about eliminating the redundancy.

Append SubD’s command: prompt once you skip the “Select face to append to” prompt:

It even looks like these two buttons use the same command (3DFace).

It even looks like these two buttons use the same command (3DFace).

The Append SubD and Single SubD Face icon is really just a macro of 3DFace.
This is for those, as you last wrote, once again press the button complex process, because on the macro Single SubD Face removed one click. 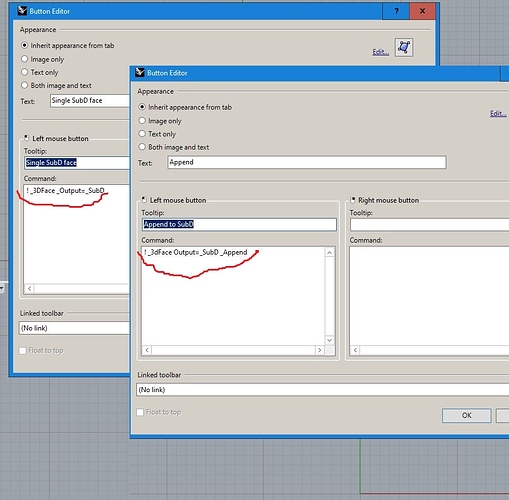 Okay. That matches what I saw in the Command: prompt.

How about a suggestion for simplified functionality then?

What if you made it so it just assumes the command is always appending, so you don’t have to select a face and press . I found that step is useless anyway-- I can append to non-selected surfaces after pressing , and if I select nothing, it still lets me append.

How about a suggestion for simplified functionality then?

You have a choice, remove the button you don’t want.
Or write your own macro button.

Don’t be like that. I’m trying to help make the software better, just like you and everyone else here.

I’ve been using T-Splines, Clayoo, and other subd programs for a decade before Rhino’s SubD came out, and I’m just looking for ways to maximise efficiency in the new interface. It’s already better than anything Rhino has ever had before, but I wonder if we can get it even better.
I’m not intending to add work on the devs just because.