Is there a component that connects two 2D surfaces like with metaballs (see image)?

If you’re looking to end up with circular arcs, then no, that’s not how metaballs work. Given your drawing I think that you’re after is a Connolly Boundary, which is a notoriously difficult curve/surface to compute.

If however you’re only ever dealing with two circles between which you wish to create the arcs, then some reasonably straightforward trig will get you there, but as soon as circles start to interfere with each other it becomes impossibly complicated.

@DavidRutten, it seems quite simple to solve that with a good offset. As usual Polyline Offsetclipper is used (Edit it works with Rhino)
http://www.food4rhino.com/app/clipper-grasshopper

We need to talk about Offset Grasshopper

Dear Rhino/Grasshopper developers thanks for Rhino 6, many useful improvements, render, Rhinocommon functions … but there is an old subject Polyline Offset see this thread : Are there some news about Polyline offset ? I know Clipper is a good solution for Grasshopper and Rhino. Update : @pascal it is not a Grasshopper question more a Rhino core function. There is a reliability problem with offset Polyline. It doesn’t work on some the cells which are simple polygon (see the picture). The sa…

The trick here is to group well circles in branches. So @Edward I didn’t reuse your script. The second trick is to offset in one direction then in the other. By default Clipper is doing the 2 ways. It is very important to have grouped curves in one branches. If not Clipper will merge offseted curves. I was a bit negative it works with Rhino offset. Thank you for your reply.
I did not know the term Connolly Boundary before.

You are welcome.
Clipper is more reliable than Rhino Offset but just for polyline. Offset in 2 directions is something always useful to smooth curves. 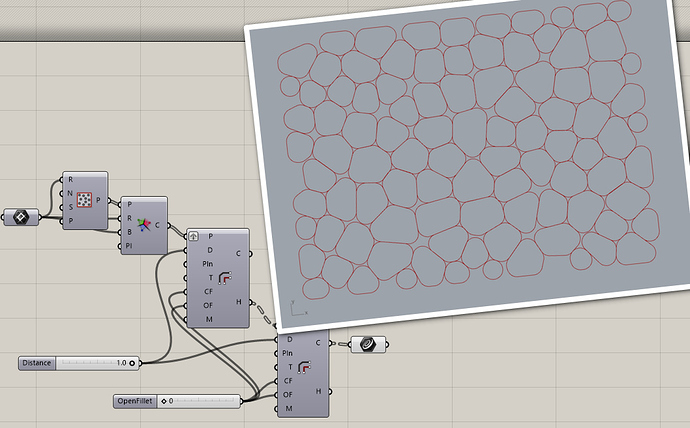 Cool. I guess since offsetting circles and arcs is about as trivial as lines, you might even come up with an analytic solution to this without the need to discretise the inputs.