Hello!
The ‘live’ boolean features really useful! However, to make a standard Rhino object work with it, it has to be converted to a vaWall (including defining a curve as axis) - which is quite odd and unintuitive!
How about adding some generic ‘vaObject’ instead that breps can be converted to, to make them work with VA?
Thanks!

I don’t know if I understand your request.

Do you want a command to convert any poly-surface to a new special object (custom poly-polysyrface) that can have other solids added or subtracted using the vaAddSolids and vaSubtractSolid commands?

Do you want this poly-surface to be still compatible with native Rhino commands?

Well, what I find strange is that one has to convert a regular Rhino brep into a vaWall in order to be able to use the live booleans.
I understand that regular objects need to be ‘converted’ into something visualarq-ish to make this work - but why a wall with an axis?

Hi Eugen,
The vaWallFromSolid command requires an axis curve in order that the doors and windows you insert there can identify its path curve.
If you don’t need to insert doors or windows there, then you don’t really need to convert that solid into a wall. You can just leave it as a polysurface, (tag it as an ifcWall, if you need to export that as a wall to IFC), and then you can edit it and apply all Rhino boolean commands directly on it.

Looks like I expressed myself not clearly.
I have two Rhino breps and want to use the VA ‘live’ boolean tools on them. Arbitrary objects, that have nothing to do will holes in walls, like two spheres or whatever.
For that, I have to convert one of them into a vaWall, otherwise the vaAddSolids/vaSubstractSolids commands won’t recognize it as the first input object. The second object can then remain a normal brep.
Right?
Being able to do ‘live booleans’ on any object is a fine and useful feature, not only for punching holes in walls. The question is: why does it have to be a vaWall, which will need a (useless for this use case) wall axis, additionally?
My wish/suggestion would be to introduce a ‘generic’ type of VA object, that works with booleans.
Thanks!

Hi. @Eugen
What does mean by 'live boolean? Does VA have such feature?
Thanks.

Yes it does. It’s meant to make it possible to add or subtract any brep from any VA object, but with the ‘trick’ of converting any free brep to a vaWall first, you can boolean anything.
After doing so, you can turn on control points for the object and will see the boolean ‘members’ with dashed lines and a central handle to move it

Hi @Eugen, I get the point now. So, in other words, you wish that Rhino boolean commands work as VisualARQ’s, so the solid added or subtracted from a polysurface would remain as a ghost object that you can move through a control point, right? In that case, I think this is more a Rhino-feature wish rather than VisualARQ’s, but we can study if it’s possible to make the VA boolean commands work on Rhino solids.

In my understanding, you’are talking about Pic 2, but nothing happened. VA boolean does not work, because both two objects are already VA object.

I could see dashed boundary and a central handle that you mean by from Pic 1, but these are rhino solid and VA Wall from solid. You said ‘live boolean’ works betwwen any brep and any VA object. Probably this is not the case that you mean.

Did I miss something? 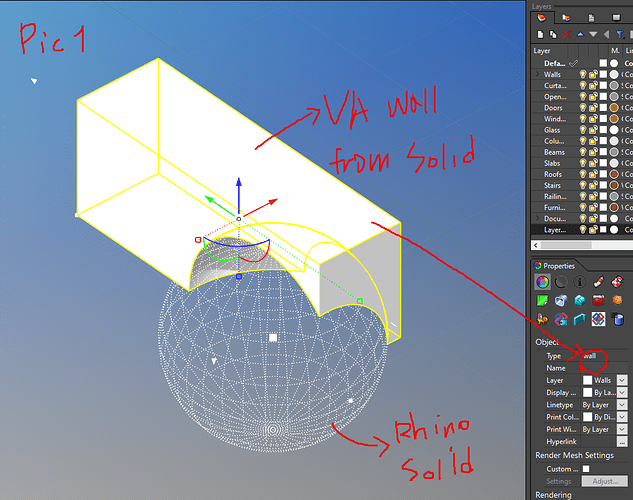 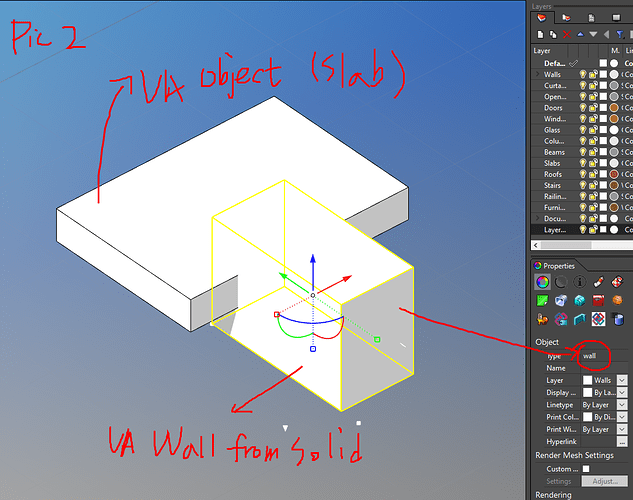 Hi @Eugen, I get the point now. So, in other words, you wish that Rhino boolean commands work as VisualARQ’s, so the solid added or subtracted from a polysurface would remain as a ghost object that you can move through a control point, right? In that case, I think this is more a Rhino-feature wish rather than VisualARQ’s, but we can study if it’s possible to make the VA boolean commands work on Rhino solids.

No, simpler: I’d like to use the VisualArq boolean feature with any Rhino object - which I do all the time, because it works already. The only ‘inconvenience’ is that the first object (the one you add or subtract from) has to be a VA object. Not a problem, because any brep can be converted to a VA object using vaWallFromSolid, then it can be happily booleaned with any other brep.

It’s fair enough that objects/breps need to be converted to some sort of VA type, but, and that’s the inital wish: why does it have to be a wall? Can’t it be some sort of generic VA container object, like e.g. “vaObject”?

All right, I think we can include a command to convert Rhino solids into VA objects (generic “Element” objects, so the path curve wouldn’t be required), so later on you could apply the VA boolean commands on them.

Thank you!
These ‘live’ booleans are a great feature, and can obviously be used aside from regular building parts. Yet it looks like people don’t recognize this easily, because this workflow is not ‘advertised’ much. (Took me years to figure… ;} )