Nice to see that this is being developed!
About the naming: for me it would make more sense to call it relations or constraints.

for the UI, it would be convenient to have the info visible at the selected entity. For example in SW it is done this way: 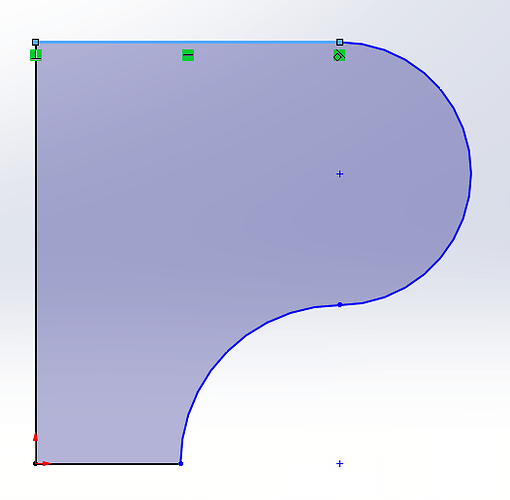 image527×516 18.7 KB
where you see if objects are fully constrained/defined (black) or have degrees of freedom (blue) and at their connection points, you get icons to indicate the relation once selecting the item.
I think this makes more sense: You want to see the relation of a certain item, not select a relation and see which item is affected as it is done now.

It would be nice to have vertical and horizontal constraints for lines between nurbs curve points too:

Nice to see that this is being developed!

But. I’m wondering: When do you want to receive feedback on this, since it seems to be still in development? And if already now, perhaps we could get some info on how it’s intended to be used right now and what it’s current limitations are and what you’re going for. Right now I don’t know if something is missing because it doesn’t work yet or if it is not intended on being developed.

Additionally: For me to make this tool useful, these would be welcome:

When do you want to receive feedback on this, since it seems to be still in development?

So far, the internal discussion says that it’s too early to make an announcement and ask for feedback. That shouldn’t stop you from providing feedback at this point! It will all be read and taken into consideration.

For me, personally, I’d like to see the bigger picture here. I started working with different MCAD applications in the '90s and know how, and why, constraints are used in those. I’d rather not “constrain” the conversation by asking very specific questions… How do you see this applied to Rhino?
-wim

For me personally it will be more of a nice to have feature when I need it, a bit like how History works. I work mostly with one-offs and I’m not sure if I’ll be using it a lot as it also takes a lot of time to set up a good useful parametric model that doesn’t break.
That being said, I can see some useful applications with dynamic blocks if it’s easy to create a library of customizable parts. But in order to do that I guess one would need to work with the concept of sketches like you have in other software and have other commands linked to those sketches. Not sure how that would look like/work in Rhino

This feature is still very much a WIP which is why no announcement has made yet. When that occurs there will be examples and hopefully things will be a bit clearer. Do feel free to experiment and give feedback. I do like the idea of visual feedback for constrained objects. I opened an issue for that. The arc tangencies do need improved but @pascal beat you to the punch on creating an issue.

The widget button for length and angle constraints in the connections panel should give something similar. I am aware of a few issues with them though.

Hi all, The Rhino 8 WIP provides the ability to create constraints. Constraints are a set of rules such as the length of a line, or angle between two lines, that are added to geometry. These allow you to build complex relationships in your model that are maintained as geometry is being manipulated. The constraints panel can be accessed from the panels menu or with the Constraints command. The currently implemented constraints are focused on 2D drawings and the following new commands are availa…

Hi @Joshua_Kennedy,
Sketch constraint is a dream coming real for me. It’s the only feature I’m envy of parametric.

My consideration is about the interface. I saw your video and having the constraint as a panel like an option make them more complex to use.

I can understand that I need to define a sketch to make it working but why aren’t all closed crvs directly converted into sketches? This would speed up the process a lot. Then, if you really need an open sketch you can decide to make it explicitly.

The other things is why the most wanted, need, useful, icons (the constraint them self) are hidden inside a panel and then under a “shy” +.
Why the constraint aren’t a proper toolbar? Like any other rhino tool.

3rd, like Gijs showed you, the icon should be visible directly next to the associated geometry, and should work as button or as delete function.

Hope this helps making this better.
Thanks.
Riccardo

Why the constraint aren’t a proper toolbar? Like any other rhino tool.

That’s getting worked on. This issue is open here. The UI for Rhino 8 is having a large amount of work being done and the toolbar is sidelined until it stabilizes a bit more. I do agree with you that it is a lot of extra clicks currently.

I can understand that I need to define a sketch to make it working but why aren’t all closed crvs directly converted into sketches? This would speed up the process a lot. Then, if you really need an open sketch you can decide to make it explicitly.

I think this is a bit heavy-handed for users who may not be doing any work with constraints. I’ll keep it in consideration though. I think the more general idea is getting setup takes a bit too long currently. This is something that we’ve been discussing and working on quite a bit.

3rd, like Gijs showed you, the icon should be visible directly next to the associated geometry, and should work as button or as delete function.

We are working on making things more interactive in the viewport. As I get a few more issues with this knocked out I’ll make another video showing some improvements.

Thanks for the feedback! I think you bring up some good points.