The file type icon is an important window for presenting information, telling us the type, version and preview of the file (for artistic creativity).

Unfortunately, the Rhino file type icon does not tell the user whether the file is a Rhino 4 file, a Rhino 5 file, or a higher version? Generally speaking, I will update and upgrade Rhino in a relatively short period of time, so my files are often the latest version, Rhino 7 or 6, but for my classmates, they are usually 4 or 5, when you start to export a lot of low When versioning a file, you have to do a good job of naming the file, otherwise it will be difficult for you to know the corresponding version of a file. 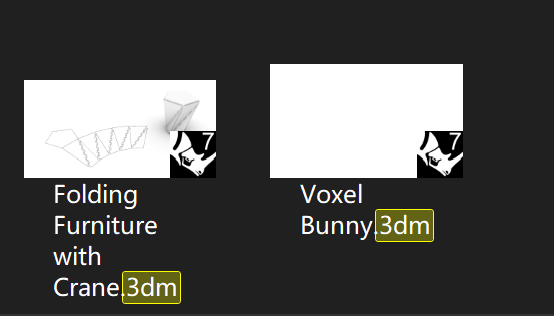 As shown in the figure, these two files are actually Rhino 6 or lower, but both have a big “7” written on them. This is because Rhino7 is installed on my computer.

I think this is not complicated, and it will not increase the workload. Write 6 on the Rhino 6 file, 5 on the Rhino 5 file, and so on. This can help users easily distinguish the file version.

If this is because of the limitation of Windows File Explorer, which restricts the file type icon with preview image can only be overlaid with a single image, then please contact Microsoft. The user needs this feature too much. Imagine that we usually have about a dozen or even dozens of 3dm files, and then you have to manage their versions, which is really a nightmare.

Rhino’s file type icon, including the preview, is commendable, which means that I can visually see the perspective view of the three-dimensional file contained in the file.

Your best bet is to specifically name the version of Rhino the file was made with in the file name.

Although the file type icon is bound to the extension, it does not mean that the file version cannot be displayed on the icon. It is very simple. The thumbnail can be controlled by the program. We only need to manipulate the thumbnail. For example, the number is displayed in the upper left corner of the thumbnail, but it can be hidden after opening the file. It is completely possible that the number is only visible to the system and the system thinks it is part of the picture.

Hmm, superimposing a version number on the thumbnail is actually an interesting idea… No idea how easy it would be to implement, and I assume that should be an option, not a requirement. Only really useful/visible if you view your folders with the large or extra-large icons option. With medium icons here the current “7” is already very tiny.

One other possibility would be to replace the thumbnail entirely with a large-sized image of the version number.

Also no idea how this would work on Mac.

I don’t believe the icon can be associated in any granularity than to the file type - the extension. To do as you suggest, if I follow, Windows would have to look inside the file and know what to bit to look for to determine the last saved version, and have some mechanism for associating the correct icon.

This can be done by explorer extensions. for example, visual studio has a DLL showing different icons for solutions from different versions.

If so (there is no absolute relationship between the file type icon and the extension) it would be better.

I hope that the feature “show file version on file type icons (and file type icons with thumbnails)” can be introduced into Rhino as soon as possible. I hope it can be officially included in the priority list of software function development. And see it in a future version of Rhino 7, or the next generation of Rhino.

And @gankeyu said Visual Studio had done it, maybe you can learn more from it? Describes how to create a handler for custom icon assignments.