UnrollSrf why have some surfaces vanished and why upside down?

Hi,
V5
First use of UnrollSrf, 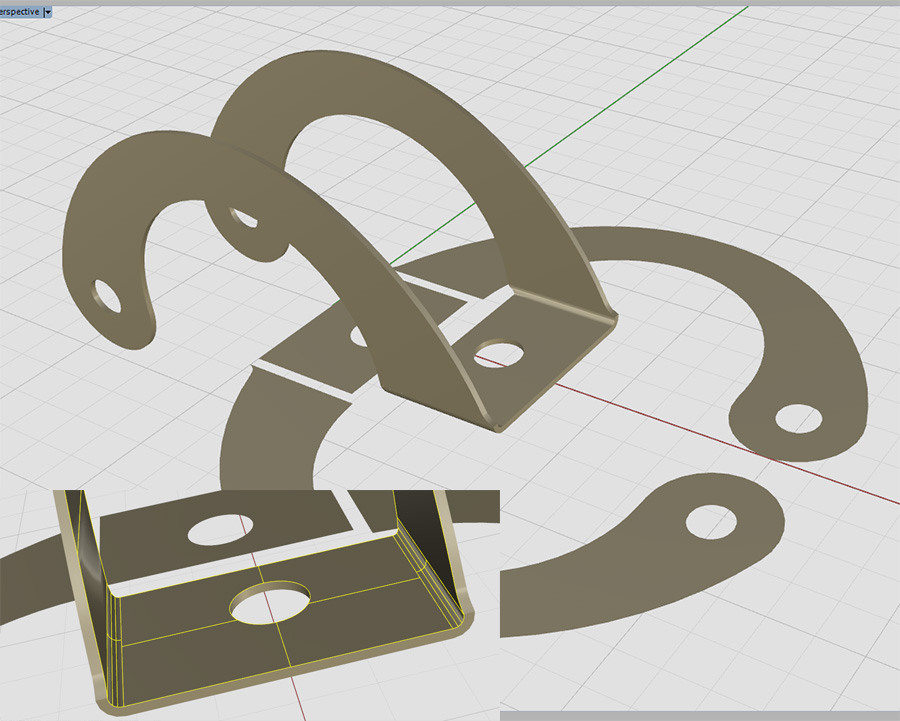 UnrollSrf loses bend surfaces2900×721 136 KB
I am after the inner surfaces here which will represent the item before bending.
firstly to get the surfaces I use ExtractSrf, then dir to check directions (perhaps not vital).
join.
UnrollSrf
Explode=No, labels=no, keep properties =yes

and the result is missing the bend surfaces, though there if I click the item. rendered ditto, wireframe shows them, Placing them on another layer doesnt work. explode doesnt show them. Unable to make 2D plan as such.

also why is it placed upside down ? I altered dir using flip on another item and it was then right way up but facing the wrong direction, so maybe this is right way up, what controls direction of result ?

Also is there a way to get incremental numbering, as I select another surface ., and I had the same shape but for the lower part, and they abutt !, I am given the same numbers again, which will get confusing, so I have given them different colours.

Unable to make 2D plan as such

The unrolled surfaces (at the fillets) don’t show up here either - although they are present, so to create the 2D, duplicate the unrolled polysurface border and discard the polysurface as it is probably no longer needed. 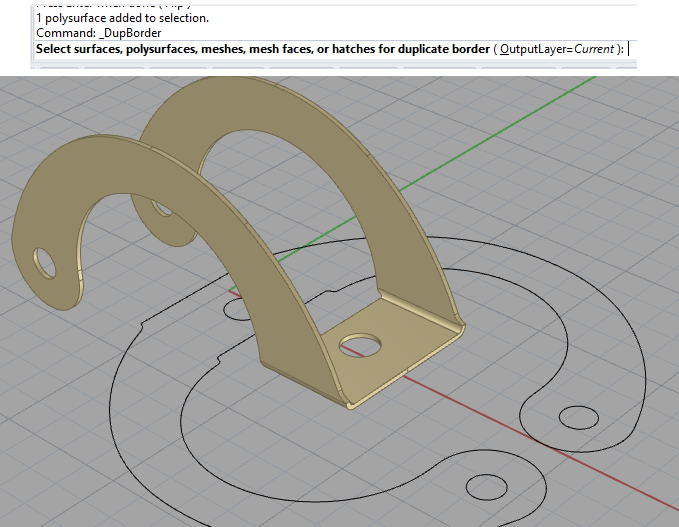 In @Steve1’s original file, the surfaces are there but they don’t shade. That’s because the surface has a bad trim loop with one micro-sized edge. I don’t know how they got that way, I cannot reproduce it here either with V5 or V6, where I get correct results with either.

I can see that now Mitch, - what method did you use to find the micro-sized edge?

also why is it placed upside down ?

Hi Steve, the unrolled surfaces land facing up and depend on the surface normal direction… 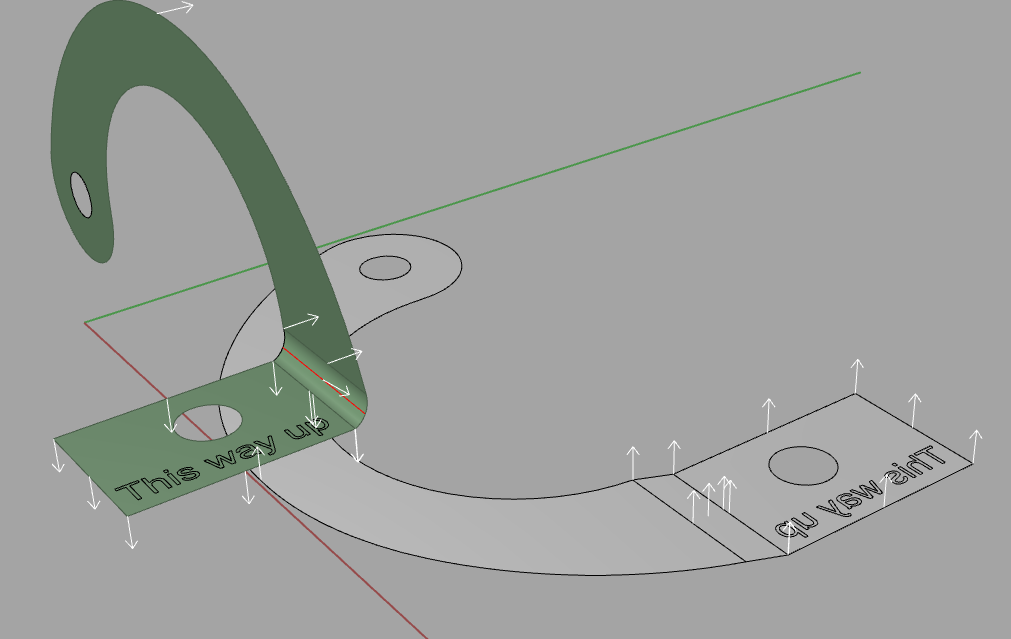 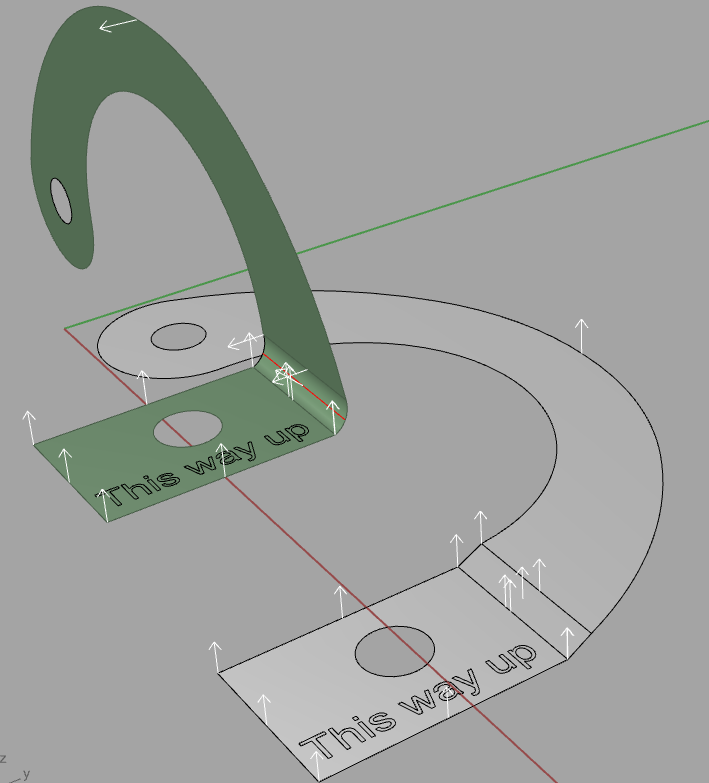 Hi,
This micro sized edge, is there a command we should all run to spot for such things, as without knowing of such it might explain other things (symmetry) going wrong , unless the asymmetry is to be expected for UnrollSrf.
see:-

Hi, V5 I have studied this object, its symmetrical, it has to be as I used mirror to make one side from the other ! using 0,0. the only difference (deliberate) is the feet holes. I select the faces that are non stretch on the bends for extractSrf, ignoring the far rear bend, else it wont unroll, I flip result to get unrollSrf to give the right way round for my needs. To get the rear face’s other bend I do this again selecting the unselected bend this time. I join the two up and in the proc…

where I have found even the 0.07 x 1.048 ‘shelf’ rectangle UnrollSrf created wasnt perfect, it had lost its 90deg corners. could such a micro edge mess up the entire UnrollSrf shapes. That bend surface with its micro edge unrolls a bit short compared to the maths/theory of where it should be, 0.064 being length of isocurve of the surface, this corresponding-ish !! to the radius of 0.04 I used when extruding the surface from a circle rad of .04 before trimming into a quarter, though why that wasnt 0.063 is another mystery as thats how the surface was made.

I am also getting a T shape end to the corner of that surface when unrolSrf done, on the sharpest part of it, so UnrollSrf is messing up what should be an L end. is that the cause of the macro edge or is macro edge causing that ?

Noted on flip, I have found all the surfaces I wanted needed flip.

what method did you use to find the micro-sized edge?

DupBorder and Explode on the suspected surfaces, then look at the number of segments that result to see if it is logical. In this case it came back 12, when I expected 4. The curved parts are segmented, probably as a result of the Make2D tolerance. If you zoom in, you can already see the offender, but also SelShortCrv or SelSmall should detect these.

The micro edge is causing the problem Steve… here it is, the unselected part 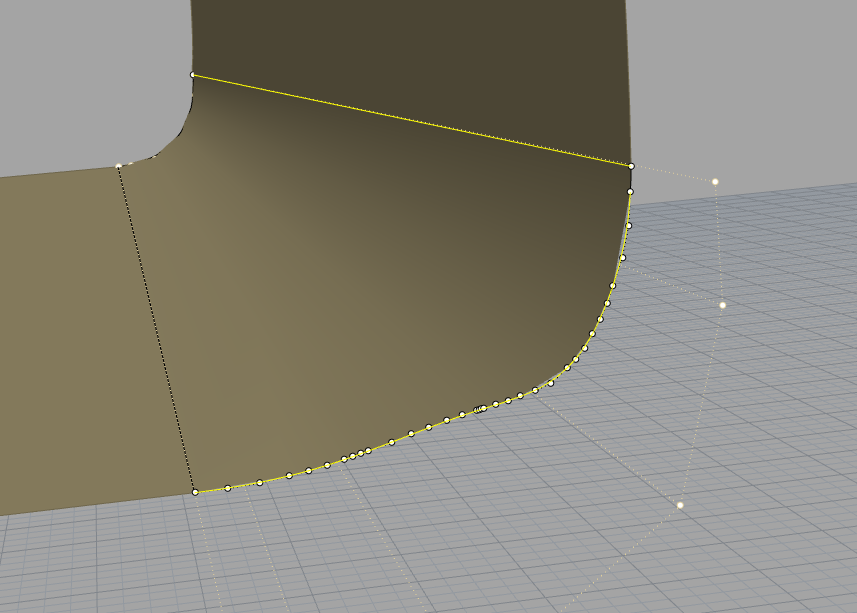 A solution is to rebuild that curve, untrim the surface and use the rebuilt curve to re-split and rejoin the result 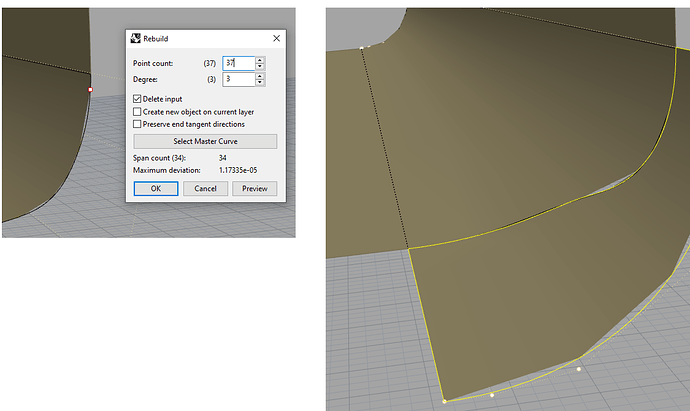 This is the rogue curve unrolled . . 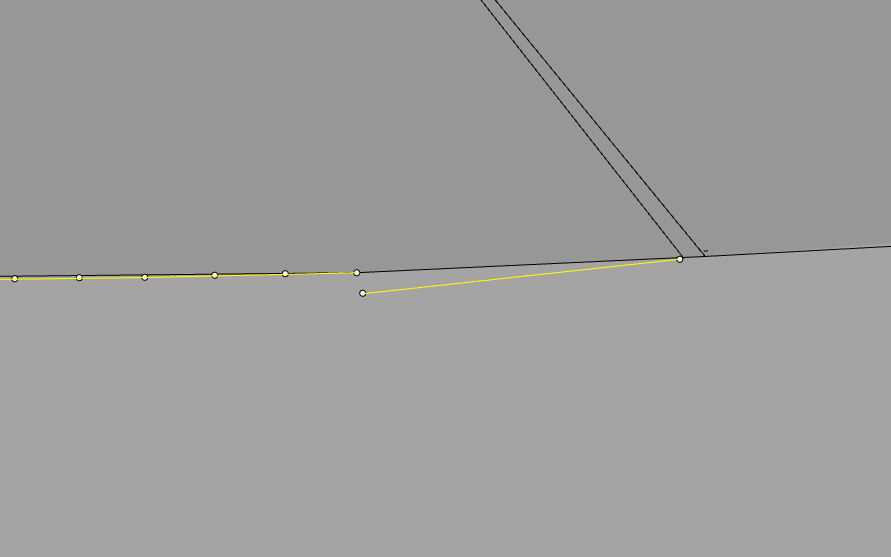 and this is the rebuilt version . . 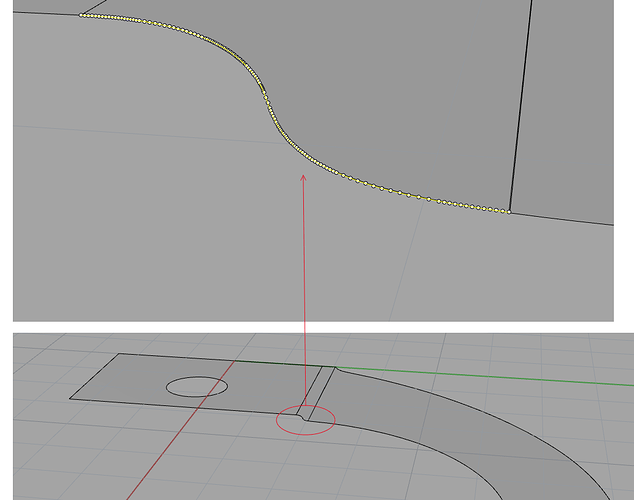 Hi,
can you attach the fixed file. I will also have a go at identifying such and fixing as per steps.
I wish to see if your file resolves another asymmetry now spotted, which is somewhat more worrying, the rectangle ceases to be so.

I have now noticed that in this, a simple rectangle loses its 90deg aspect in unrollSrf, i.e no longer a rectangle. (I have drawn a red line snap to same grid point to show the grid as grey wasnt so good for the printscreen) [Rectangle loses exact shape in unrollSrf] Can one afford to ignore this difference ? Would the micro edge of the surface attached to it be responsible ? https://discourse.mcneel.com/t/unrollsrf-why-have-some-surfaces-vanished-and-why-upside-down/106166/7 Rectangle lose…

Not sure of mention of make2D as I didnt perform that command. The surface at the bend was a pipe or the tube command with 0.036 walls trimmed with the side view and with 0.04inch rad solid cylinders using Boolean difference. All carefully done. It is worrying when such simplicity and care see Rhino do such micro things.
Wish there was an auto healing function, it would show where the offenders were, show a preview of its suggested fix, and user ok’s it. No doubt a million reasons against that.

Are my tolerance and accuracy settings correct for this and would they have copied across in my copy paste used on the objects to the file I made for this post ?

Hi,
I found I had to explode surfaces first, then dupBorders, then explode, that way I had yellow lines at all 4 edges to each surface, then I could see the rogue.
SelSmall and SelShortCrv said nothing found for me , thats worrying.

Only knowing in this where you guys saw this showed me where.
I did try a simple join it back on but that partly worked, one side still blank, why ?

anyhow then joined it and rebuilt it.

Now its complete AND THE OTHER TWO ISSUES (asymmetry) also gone.