Trouble calling other commands when debugging plugin with Visual Studio

I wanted to start learning how to make plugins for Rhino and Grasshopper following these guides. When I start debugging, it opens Rhino, but if I try to call any command that is not part of the plugin I’m debugging, Rhino stops working and I get this in Visual Studio 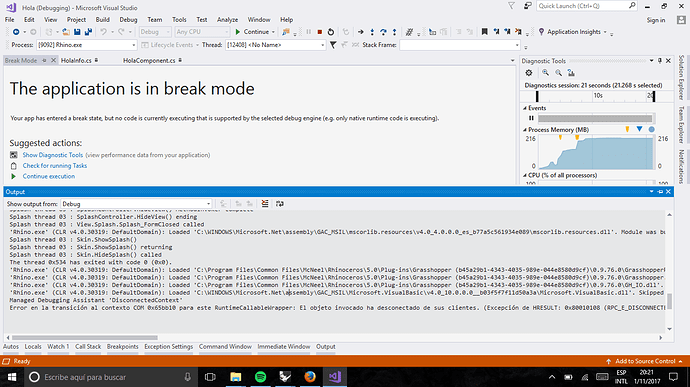 and I don’t know what to do next. The only thing I can do to get through it is stop the debugging, Also, when I try to debug a Grasshopper plugin, I type Grasshopper in the command line to open it, but the same happens. I don’t know if I’m doing somethig wrong.

I had the same problem even when I called a command of the plugin I was debugging. I was following this example but the same happens with the line

I hope someone could tell me what’s wrong.

That is strange. Try clicking on the exception settings tab shown at the bottom of your image and uncheck items. That would be my first guess of things to try