Hi all I’m trying to make a terrain/surface from a bunch of pointsterrain definition from contours.gh (21.2 KB) .

However I can’t seem to get it to work for some reason and I’m a bit stuck. I’m basically a beginner in grasshopper so I would appreciate any help I could get.

You need to internalize your geometry.

Sorry I’m not sure I understand…

Yeah, of course it helps. What about the ‘Countour’ param? And the error on the SrfGrid is:

P.S. I found the “Countours” layer but still get the same error from SrfGrid. It looks like what you are trying to do is create a surface from the contour curves?

Thank you so much, I really appreciate it.

Indeed. The problem is the mesh doesn’t cover the top right corner of the surface in ‘Top View’: 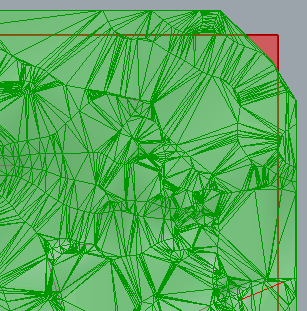 Hi everyone,
I am trying to create a surface basically using the same method. I initially used a regular shape for the bounding box on which I built the surface, but as pointed out at the beginning of this post I received the error null “1. A point in the grid is null. Fitting operation aborted”. So I tried to use an irregular shape so that the mesh could perfectly cover the surface but with no luck. Does anyone has an idea of where the issues is?

I have the same issue as the OP of this thread.
I tried every solution suggested on here, to no avail.

Does anyone have any idea why this isn’t working for me?

I really hope someone on here can help me out, I’m kinda lost.

And this is a DUPLICATE POST where R7 is mentioned there, but not in this thread:

Hey Guys, I’m an architecture student tasked with working in Rhino7, specifically in Grasshopper. I’m new to Grasshopper, but experienced in Rhino6. I want to generate a site model from a set of contour lines I have. I followed a tutorial on YouTube (How to transform Contours into a Rhino Surface - YouTube), but it simply doesn’t work. I always get the same error in the end, when trying to generate a surface from points: “a point in the grid is null. fitting operations aborted”. [Capture d’é…

I apologize. I’ll take down the other thread, I figured this one would be more active. I indeed am working on Rhino 7.

hi @phileas.schulhof , It seems you got caught by the duplicate post patrol

@Joseph_Oster is generous, but you have to be disciplined in your inquiry. because the tutorial you’re following does not show to you what to do when your situation isn’t the same as in the tutorial

long story short: you must account for trimmed vs untrimmed, hit vs no hit (when dealing with projections/mesh ray), luck, fate, Rhino’s mood, tolerance, your own mood and tol…

It appears to work without error in R6? Perhaps your trouble is that your points (surface and mesh) are very far away from the origin?

thank you very much for your reply!

@Joseph_Oster I see why you don’t like duplicate posts now, I apologize again. Do you still want me to take down the other one now that it has a reply? If yes I’ll do so.

@corellaman for some weird reason, when I open the .gh file you gave me in R7, I end up with this:

I didn’t change anything… very weird.
I think my university still has computers with Rhino6 installed, I’ll search for one tomorrow to check if it is Rhino7 messing around with me.

@corellaman Upon further inspection, I noticed that the panel in the top right (the one linked to the “create Set” Node) shows 2 lines in my case (0 True; 1 False) in my case, whereas in your image there’s just one line (0 True). Maybe that’s an indication that R6 and R7 don’t quite work in the same way? Just guessing…

Does this work for you in R7? The white group moves the surface and contours to the origin before using your unmodified code in the purple group.

I didn’t change anything… very weird.

I told you: Murphy’s Law

Anyway, as Joseph points out, distance-to-origin issue, whatever that means…
The work-around I had previously shared dealt with that to ‘bypass’ said issue.

Joseph’s contribution will leave you with less to deal with by fooling Rhino into thinking stuff is closer to 0,0,0. Grab that instead if you’re trying to stick to the ‘tutorial example’.

Regarding the R6 vs R7 issue, I copy-pasted all into R6 and saw no problems:

@Joseph_Oster Thank you very much, that solved the issue!!

thanks @corellaman as well for your precious help.