SubD improvements and others old stuff

Im on the latest Rhino7 for Mac and dont know wether you guys have the same issues;

A. First i have an issue about Rhino selects all objects and surfs in the back rather than the foreground. Ive asked this before but didnt have a reply wether this is a setting or just something people accept?
Its really a problem in my op since you dont have time to keep all objects properly isolated/hidden/locked at all times.

B. In a model with nurbs and subd’s theres suddenly no distinction in between selecting each separately.
B1. I cant group objects/surfs/crvs (as per earlier) to keep out of the way.

Ideas for improvements on SUBD-modeling;
C. Ive found kind of a technique to be more in control when SubD-modeling (goes more for hardmodeling) and it would be really nice with a function letting you set up crvs/straight lines in a boxlike way to then attach verts to when wanting to be more in control of the surfs and align them.
Maybe there is such a way already - could anyone enlight me in case, please?
The tool could be made to allow a curve being built in between two or more verts as guide tool to then attach and ‘line up’ a row of vert’s.
D. Is there a tool for ‘attaching’ an open edged Subd-object to a Nurbs surf? WOuld be nice otherwise.
(For example controling how a mirror housing would attach to the main surfs on the fender of a car.)
E. Please bring back the possibility to ‘extrude’ Subd’s not locked to an axis solely (like it was in the first T-splines plugins for Rhino). This is alone, the fastest best and most free way to model with this type of surf’s. Why was it removed? Sooo fast!
D. Additional tool to help layout of subd’s as this is challenging at times - dont have any direct ideas for it though…

Can you share an example of this? Clicking on an object on the foreground definitely selects it and not what’s behind it, here.

In a model with nurbs and subd’s theres suddenly no distinction in between selecting each separately.

Not sure this is what you mean, but there are selection filters available for SubD and most other types of Rhino objects. _SelectionFilterToggle is the command.

I cant group objects/surfs/crvs (as per earlier)

Grouping objects definitely still works here, whether SubD or NURBS surfaces. Please share an example if something is broken for you.

Is there a tool for ‘attaching’ an open edged Subd-object to a Nurbs surf?

I have a couple of feature requests open similar to that ( RH-49943 Allow subd edges and NURBS edges to be joined and blended between, RH-65212 SubD: There is a way to make naked edge of Subd supporting sweep2 as a real Brep edge, both are internal view only). For modifying a NURBS edge so that it attaches to a SubD the usual way is to convert the SubD to NURBS and work from it, then deleting it when the match is done. For modifying a SubD so that it attaches to a NURBS there are a lot of restrictions in the shape of the NURBS edge (degree 3, non-rational, 0 curvature at both ends) that really limit how useful that tool would be and I’m not sure what you are imagining even has a solution.

‘extrude’ Subd’s not locked to an axis

Can you show an example of what you mean? Do you want different extrusion directions for different vertices, or something else?

A/B:. One of the examples where now, when in subD-mode it wants to select plenty of unwanted stuff. 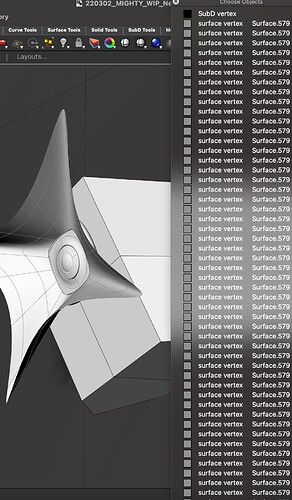 About the issue with picking stuff in the background ive had this problem for years, dating several versions and computers ive had. It prefers selecting stuff further to the back of actual view.

Selecting and grouping surfs and objects happens occasionally. Today latest when wanting to group a number of nurbs surfs in stp-format.

I use SetPt a lot. The scaling and this is not always ideal.

With the gumball which is generally good it does have some hickups where it doesnt want to toggle between World and object- orientation.

I don’t know what is causing your selection issues (selecting too many vertices, selecting in the background first) but it certainly should not happen. It’s probably best if you contact the Rhino support in your location (Rhino - Rhino Support should give you the relevant details) and we will be able to figure out if this is coming from your config or a bug in Rhino.

Or maybe someone like @BrianJ knows what’s going on just by looking at the picture?

(There maybe some duplication going on in your file that would explain the many vertices selection candidates. What does _SelDup show? See “RH-69098 Failed _Project of SubD vertices copies the SubD” that I just filed for more info)

Selecting and grouping surfs and objects happens occasionally. Today latest when wanting to group a number of nurbs surfs in stp-format.

This one I don’t understand what you mean. I thought you wanted to group things together (i.e. using the _Group command). Is it actually a selection issue too, clicking on one SubD object will select multiple objects of different types at the same time?

I use SetPt a lot. The scaling and this is not always ideal.

You can project SubD vertices and edges to a surface using the _Project command. For projecting to a line or curve we do not have a command that I know of, I’ve filed a work item to add one “RH-69099 Add ability to project points and curves onto a curve”.

It prefers selecting stuff further to the back of actual view.

Can you share that 3dm model with us here or at tech@mcneel.com and explain what you are trying to select and how and in what display mode? For instance, are you attempting sub-object selection while holding ctrl+shift or simply left clicking. A screen recording would be great if possible.

Pull or Project is what I use for that.

@designine , how does the _Align command work for you, with the _ToCurve or _ToLine options?

You can use this command to project SubD control points onto a curve or line. The projection works in a “closest point” manner. It only works on SubD control points (i.e. flat mode), not on SubD limit surface points (smooth mode), but I could fix that if this is something that you need. See @pascal’s comment below, and " RH-68931 SubD vertices are selected but control points are aligned to curve"

FWIW, if you turn on edit points (EditPtOn) for SubDs, Align will act on those.