Strategy for removing points inside PointCloud

I suddenly ran out of ideas. Starting from a fairly evenly distributed bunch of (planar) points, is there anyone out there having good ideas about a strategy for removing some of the points “inside” the cloud. What I want is to keep a band of points along the outer boundaries of the pointcloud.

A working solution would have to be able to get its way around the boundary also if it makes a turn into a “keyhole” (or “tunnel”) into the cloud (constrained by a minimum gap size as to avoid narrow inward “spikes”).

I need to come up with a C# algorithm, so any ideas illustrating a working strategy would be gold.

So the main issue here seems to be determining the boundary of the point cloud? 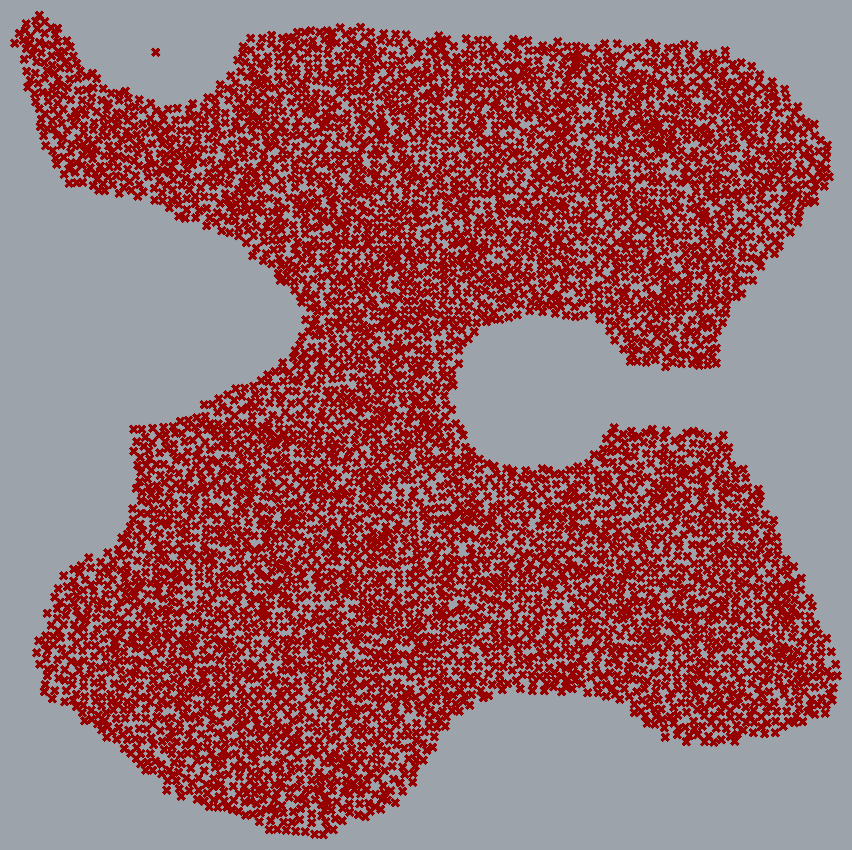 determining the boundary of the point cloud?

For any pointcloud, I’d like to keep only a band of the “outermost” existing points around the cloud, like the blue marked ones: 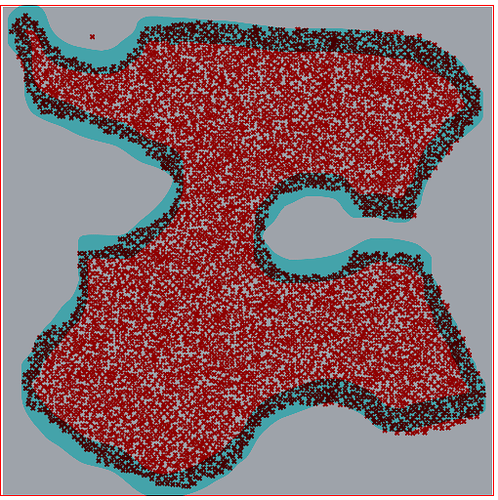 I would have no other input data than the cloud itself, and a desired width of that “blue band” of points to keep, [Edit:] so I wouldn’t have any curve boundary etc to know where to cull. It must all be derived from the cloud itself.

At first glance I didn’t really grasp how the definition works which you posted, but I’ll have a closer look asap. Thank you for posting!

I managed to get a “concave mesh” (white group) and perimeter boundary around the point cloud. I left out the Graph Mapper from the other model that causes the gradient effect and cull all the points within ‘edge_L’ distance from the perimeter.

Wow Joseph, that’s cool, I can definitely learn from this approach!

Thank you very much. This really looks clever. Edit: And it’s also super fast.
I’ll study it in more detail.

I didn’t mean to leave two ‘edge_L’ sliders in the model (copy/paste) but if you adjust the first one in the white group and hide the Join boundary curve, you can include that single point all by itself.

P.S. It looks like 9.5 is the smallest value possible on that slider in the white group to get the most edge detail. Smaller than that and it goes wacky.

P.S. It looks like 9.5 is the smallest value possible on that slider in the white group to get the most edge detail. Smaller than that and it goes wacky.

No problem. I would expect that, since if that value is divided by three it would be close to edge-length of the triangles (if I understood it correctly) and if edge-len is too short it’s no wonder if the algoritm caves in on itself.

There was no need for Explode and MA since it’s the same as polyline length.

I’m working on a C# component doing the magic as in your Gh definition. See upload below.

Fig 1. A C# version (white ring) along with the original strategy (Gh definition) by @Joseph_Oster:

Fig 2. Different “Naked Edge” result for “closed” Polyline compared to C# created ditto. I marked some examples. The yellow line is the desired result from the Gh Polyline component with “closed” = true: 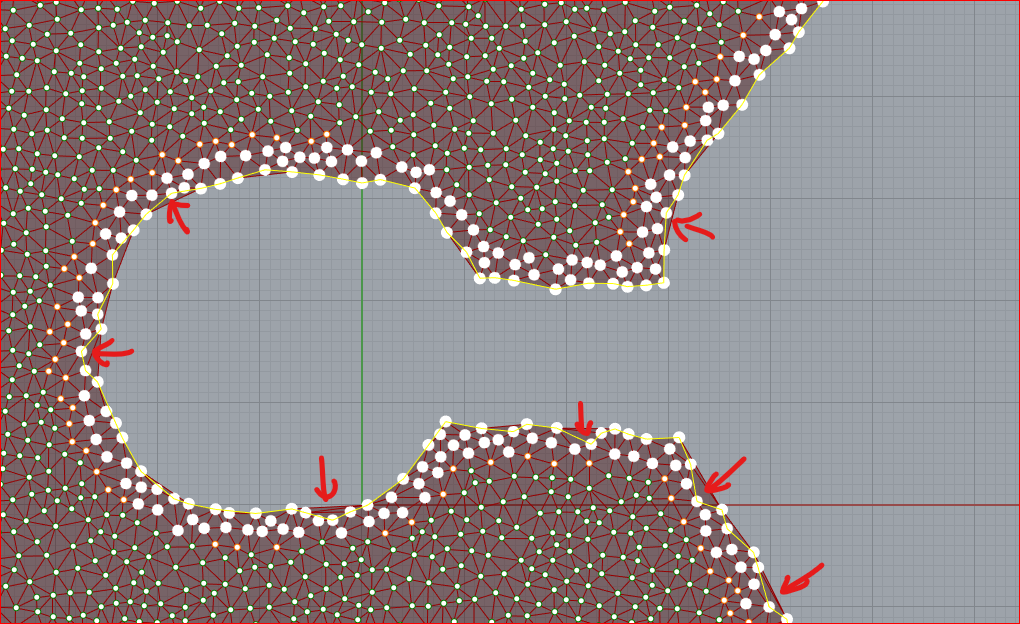 I added to the Gh definition a Sort component to ensure that only the longest Naked Edge is used for the final point culling.

Notice also that after adding a wire to any C# Component output, the Gh definition must be recomputed for the component to become aware of the change (it then know’s it needs to internally
process the desired output data, which is my optimization trick to skip processing such data which isn’t asked for).

The GH Definition and the C# Component:
ConcaveHull_BorderWidth_Component_R1.1.gh (257.8 KB)

I want to thank @Joseph_Oster again for this cool definition. I wouldn’t have come up with something similar in x thousand years.

My Q: So what is it that causes the “closed” option to give the different result? I just can’t figure it out (so I could mimic it in C# code), because the closed result is the desired result .

I haven’t looked at your code but without the ‘Closed (C)’ set to True, only two of the three points will be connected. When all three points (vertices of a mesh face) are connected, a triangle is formed and it’s the sum of all three edge lengths that determines “large” faces from small ones. The CullF component then culls (filters) only the small faces with ‘Pattern (P)’ inverted, ignoring the large faces and leaving the “concave mesh”.

P.S. I don’t understand why Sort is added? Unless you end up with multiple mesh boundaries? I’m unable to examine your code at the moment.

P.P.S. Oh wait, you are using a value of nine and getting two boundaries; I warned against using values less than 9.5 to avoid that problem.

I absolutely love it!

Ok, so my code doesn’t close the face edge loop so to speak. I made a test and found this (green is created with C# code, the red is with the Gh component: 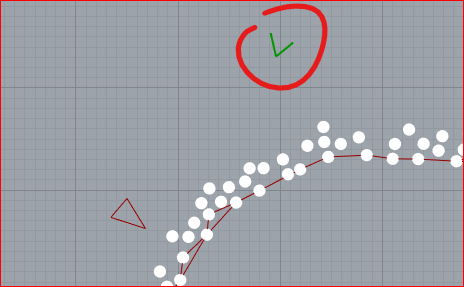 Gotta close it manually then. Here’s the current (unfixed) code that created the green Polyline(s):

The red loop (pictured above) is a “hole” which I found, hence the Sort component.

And yes, for different densities one would have to adjust the edge length properly.

OK, I see what’s going on. If you disable ’Closed (C)' in my GH version, the boundary matches yours.

Ok, so my code doesn’t close the face edge loop so to speak.

Correct. You might want to enable preview on MEdges (Mesh Edges) to see the mesh faces. And I understand why you used Sort. I just avoided that problem by keeping the slider value at 9.5 or above. Cheers.

If you disable ’ Closed (C)' in my GH version, the boundary matches yours.

Yes. I fixed the C# code so it closes the loop. The code fix:

Have a nice weekend,
// Rolf

Hi @Joseph_Oster @RIL very nice solution to what it seems a more complex issue! Kind of reminds me of Alpha Shape.

I remember doing something similar to what Joseph did here:

Thanks, will check this out! I also developed my idea further, I think it worked… I create a Delaunay Mesh from the points, and culled the faces based on area and edge length. Then I got the mesh edges and rebuilded the curve. Then applied standard medial axis. [mesh] The only draw back was the face culling of the original mesh… It requires some slider tweaking. I also kinda cheated because I used a Rhino drawn curve to grab my points with point in region. I think the Proximity component …

There, I remember I used FaceBoundaries to get the polylines of faces. I believe it is native. Maybe FaceCircles could also be used for simplification/optimization purposes.