I was wondering if it is possible to gradualy increase the vertical wide between the spiral turns?

it could be scripted i imagine but no, nothing native to do it right now.

that said, there have be a decent amount of requests asking for logarithmic spirals (i assume that’s what you’re after except it also travels vertically?)

Perhaps @Philippe1 wants a variable pitch helix such as this: VariablePitchHelix.3dm (42.8 KB)

The variable pitch helix was created from a standard helix using CageEdit. The cage is a degree 2 line with 3 control points. The middle control point was moved vertically to alter the spacing without changing the overall length of the helix. 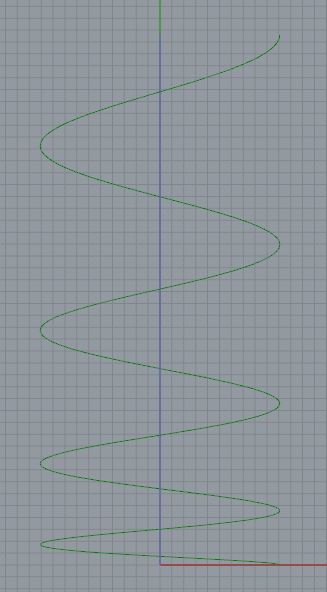 Perhaps Philippe1 wants a variable pitch helix such as this:

yeah… seems likely now that you mention it ; )

Hi Guys, both thanks for the feedback, the post of David is indeed what I am after, cool tip about the CageEdit never used it before… will try it out. Thanks!

Hi Philippe
try this method . Use the command _InterpcrvOnSrf

wow this is cool! thanks, will try immediately!

One question, how would you create the incremental distributed points it connects too? Same method as above, CageEdit?

This is a good method.
One caveat is if you have multiple spirals of varying radius and pitch that need to be tangent at the end points where they connect together.
Any idea how make consecutive spirals/helixes tangent to each other?
Thanx … Chris

Attach an example of what you want to achieve.
Vittorio

The flights are not done yet.

Still not sure how I wanna do them, b/c they need to be fabricated simple
and easy, and this is WAY too much welding.

I found Spiral to work fine.

But when creating an i.d. pathway for the inner flange (using intersect
surfaces), the curve is not smooth, and causes all kinds of problems with
the inner flange.

I can’t figure out how to smooth that curve to get a real nice flange.

I tried setting profiles along the inner edge of the main flight, but 1 rail
won’t allow all those profile lines, even those they’re the same length and
perpendicular to the spiral curve.

I did figure out how to blend the spirals good enough, but not exact like I
want: arc blend.

The thing that kills me is that none of this is bi-directionally parametric.

So if a change happens, I need to start all over again from scratch.

I’d like to see what you can do w/this.

hey Chris.
the PDF is blank.
can’t see anything… can you try uploading again?

Find attached an updated pdf.
They’re 3d pdf’s so you have to open them in pdf viewer.
I managed to get it pretty clean.
Have a look.
However, I want a ‘nice’ way to do this.
I spent the better part of 15 hours trying to find the best work-flow for this.Uploading…CementMixerDrum2c-3D Model.pdf (311.2 KB)

Hi Chris - I don’t know if this will do or not - the red line in the center is a control for a tapered spiral There’s a loft from the spiral to the axis, and this loft intersects with the drum - that is shown by the cyan curve. If you turn on points for the red control object and move them vertically, everything will update and you can see the cyan curve change.
CementThing.3dm (206.0 KB)

Thanx for the model Pascal.
Can you explain a bit more clearly for me about the “loft”?
I don’t understand what you lofted.
Thanx …

PS: Incidentally, in my model above, I used Vittorio’s method on a cone larger than the actual part, and then trimmed the surfaces against the inner and outer multi-cone Revolutions.

Duh! I failed to notice that layer was turned off!

Thing is, this feature has to be carefully controlled.
I don’t know the Rhino commands well enough to know exactly what to use.
But this method, although good, is only one part of the work-flow to creating what I need:
A screw flight that that matches the drum i.d. and has a specified height, and an inner flange running the length of it, like I show in my pdf.
This little flight is kicking my butt!

Hi Chris - if the spiral control is sufficient, then from there you can use that as a path for a Sweep1 (for instance) of the actual shape of the ramps - I don’t know enough about all that to advise, I was just looking for a way to get you the control of the spiral that you need.

Would you please post a link to a tutorial on how you controlled the spiral?
I need to learn what commands to use and how to do it.
Thanx …