HS_Kim has suggested the following method, but I can only make it work for plannar geometry, not more complex shapes. 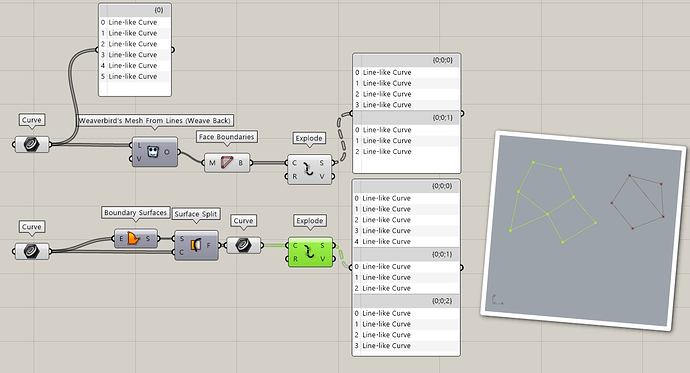 Until some good Samaritan (who plays ball with components) gives you the native components answer … get the attached (in fact 2 lines of code) : it puts polylines in a tree where the branch index equals the N of poly segments. Notify if you need further sorting on the Lists (per length for instance) of some other type of addicional sort/classification/whatever.

Just noticed that I havent internalized the first input.

After inputting my original geometry, the result is not at all what I am looking for. The output in the example file is what the result must look like.

You have 40 curves right? They are Polylines with variable N of segments right?

If so the (very simple) thing provided is impossible to fail … beause is just 2 steps:

Dear polyline how many segments you have?

Store polyline in a tree were the branch index equals the N of segments: 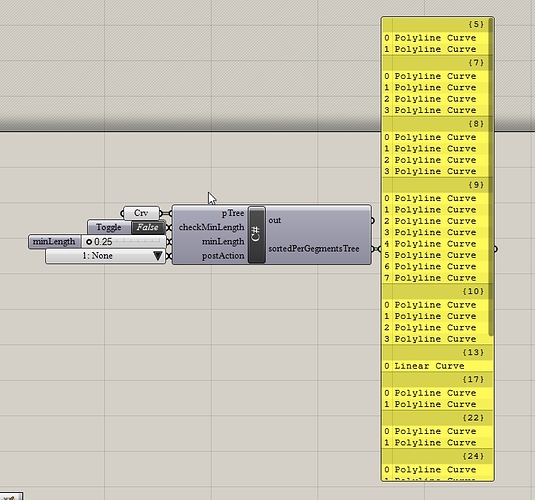 Or you actually mean that you want to find how many (primary) closed Cirquits (as is the classic name of that type of Loop) are possible from these polylines (if they are open) and then sort the Cirquits?

BTW: Is this what you are after? If so has nothing to do with Sort and as I said is a special kind of Cluster Analysis (so to speak) called: primary Cirquits

This might not be a solution what you expect, and also not a general solution, though…

If I understand it correctly, your problem can be expressed in terms of an undirected multigraph where edges are your curves and the nodes are its end points, and you are trying to find the set of non-overlapping shortest cycles which span the entire graph?

It’s unlikely that you could use native components to solve something like this - I think the strategy would be to script some sort of breadth-first traversal of the graph from a given node, which returns the edges that make up the minimal cycle containing that node, and then iteratively remove those edges from the graph until there are none left.

Hi Kim! I will test it as soon as possible.

Well … the issue was the term “Sort”. As the other fellow user stated correctly doing this for any Graph is impossible without code. The delicate point is the classification (not to mention the sear performance) of the code: in this occasion is strictly internal since closed primary cirquits are paramount in quite a few AEC solutions (complex random trusses with large amount of axis and the likes).

I’ll try to figure out a simplistic solution (using 100% code) that can being published here using connectivity trees (like the things that Sandbox does on Line Lists etc etc) taking advantage of the fact that common vertices have valence either 2 or 3,

I got curious and decided to implement it in Python after all - This works on your test cases but will probably crash and burn for even slightly ill-conditioned inputs, so be warned!
Sort Curves (1).gh (25.1 KB)

Found a solution. Geometry gym! The ggNetworkPolygons nails it. It will be interesting if I am capable of doing it with no plugin.

Here is an universal solution. I have tested it in any possible combination and it works. The clever “magical” part is ggNetworkPolygons as I have said. And it is really interesting to know how it is done.

I wonder why nobody noticed one important aspect of polygons:
If you walk through a set of curves and you always choose the most left (alt.: most right) lines connected, you always end up at the beginning line, and if not (after x iterations) its no polygon.

This makes sense. But you would have to trace both in left and right direction and then delete the dublicate polygons, no? Any way to do this without plug-ins?

First of all this problem isn’t solvable in 30 minutes. You need much more time in implementing a good and robust algorithm. Without coding I see no chance.

I think qythiums approach points into the right direction. You need a graph, where you sort your lines into neighbouring relations. You also need to filter out already walked lines depending on direction of traversal. Each line can only share one polygon in one direction of traversal.
Left-Right checking only works if a line has 2 neighbours at one end, because you need to make a plane for it. Otherwise it is not determine where left and right is. Left - Right checking works with the dot of a normal (based on that plane) from you line. Assuming your normal is right, if the dot is <0 its left,if 0 its parallel or antiparallel if > 0 its right.

I wonder why nobody noticed

But the big thing is the 23.59 factor: when you are tired, out of time and (most importantly) out of cigars/vodka … and you think that there’s CCX Events around whilst they are not. What to do?

But the big thing is the 23.59 factor: when you are tired, out of time and (most importantly) out of cigars/vodka … and you think that there’s CCX Events around whilst they are not. What to do?

I actually learned it the hard way, but once I knew the trick, my life (and algorithms) became much better.
Cad rule 2359 is often misinterpreted. It basically just says, that it’s a good idea to organise yourself and your clients in a way that you never run out of sleep, time and vodka. (Not to smoke also helps…)

It begins with the philosophy that good things need enough kappa and euros.
I would never sell my algorithmic skills as something faster, efficient or superior to others. That just invites
people for testing it out. In my universe there is no place for bad curve input, because you won’t make good
surface data from imprecise curves anyway

Besides that I would never run into a situation where I need to reorganise curves like that, but that’s another story.
It’s just that most people don’t like to hear that, they always outsource work
to others, dreaming of a world where computers and few na(t)ive europeans people do all the work.

Nice work by the way,

So yes I’m doing good, how are you?

Not to smoke also helps

Yikes! Who wants to live for ever? You tell me.

Other than that my universe is full of bad data, wrong data, stupid data and data that make no sence at all (Karma what else?). So for the pro internal C# stuff … 90% of effort is wasted to deal with that bad version of the universe (Karma what else?).

Moral: How had the mighty fallen.