Does anyone have a way to run a fillet around the juncture of 2 tubes 90 degree to each other and touching? (top example) Fillet would need to go all the way around. 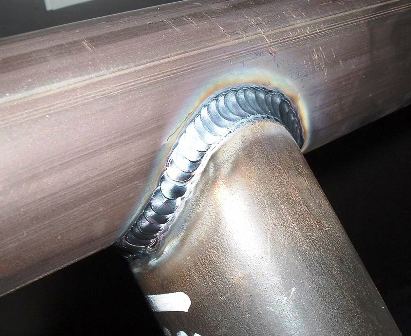 I’d try FilletSrf, possibly with Trim=No, depending on what you want to do, and then some bumpmap, (assuming rendering is the goal) UV mapped onto that surface. I’ll see if I can make an example here in a minute.

FilletSrf works when the two tubes have some overlap. When there is a single point of contact, noting gets filleted.

The surfaces do not need to touch for FilletSrf to work as long as the radius of the fillet is large enough to bridge the gap.

Another way using Pascals method first, after that i rebuilt the fillet surface and used _MoveUVN to deform every second control point of the middle row in U and N direction…coupled with some grip randomisation of course to avoid using a bump map

thanks davidcockey for the assist

that is exactly what I’m after. can you walk me through it from beginning to end?

that is exactly what I’m after. can you walk me through it from beginning to end?

sorry for the V4 file, been to busy and overlooked that

To do the weld like surface, you can go this route:

Got it. I was successful in working through it, but mine turned out more like dragon scales.

Looks like I’ll have to spend some time with _MoveUVN to get the look right. Then somehow come up with a way to make same N and U changes from weld to weld to get some consistancy.

I think you almost got it, you might try to smooth in the MoveUVN dialog as well, then move along N and U again. It took me while to get it close to your picture.

Btw. welding is great in Rhino, how would you get that ? :

I’m attempting to draw a 3D TIG weld for one of my projects and found this thread. First I tried out the _MoveUVN technique, but I couldn’t get it to look right for the stack of dimes effect. That being said, even this is much better than a simple smooth surface for the weld bead:

Then I tried out a totally different approach that yielded something I’m much happier with, but it’s very labor intensive:

I’m still playing around with it, but I wanted to share what I have so far.

A good friend of mine suggested the same thing when I was talking to him about this project. I’ve never used displacement maps before, so that’s the next thing I’m going to play with.

I think this is what Joseph_Culbert suggests as well, but if it is just for rendering/looks then I have curve arrayed (with overlap) a disk around the intersection of the pipes, boolean all the disks, custom mesh to get even density, extract render mesh, then smooth, then trim out the inside mesh if needed:

I guess realism depends on the disk geometry…

Maybe a more controlled method is to go ahead and fillet/blend the pipes and then flow the disks on the blend surface. I had some extra time so I tried it out spending more time on the disk:

This one was booleaned/meshed before flowing and it was much faster to flow:

Smoothed a couple times after the flow operation caused some pinching in the center.

Waiting for traffic to clear, with some positional randomness in the disks pre-union:

Thanks for all the amazingly useful tips here. I’m still very new to Rhino but have a fair bit of Sketchup experience.
I was looking for help with the welds on this Rocketeer helmet (just a practice project).
I settled on the stack of dimes arrayed along a curve tip. I turned my dime into something like a red blood corpuscle shape which I think has worked quite well for a quick weld simulation.
Thanks again
Jono