I’ve been working with the PopulateGeometry node in Grasshopper for generating a lot of points on a lot of Breps, and as other posts have noted, the logic for evenly-spacing the points slows down the node considerably. I don’t need the points to be evenly-spaced for my use case (though admittedly it would be better if they were), and so I wanted to rewrite a faster version of it as a python script node without the even-spacing logic. I started by following the outline by Laurent from this thread, and I’ve got the face selection by area part working, but I can’t find an easy way to choose a random point on a particular face.

Right now, the best way I can think of is to call DuplicateFace() on the BrepFace to make a new Brep, create a bounding box for that Brep, and sample the area in the bounding box uniformly, throwing out samples that are outside the face by checking with a call to “IsPointOnFace()” on the original BrepFace. This seems like a somewhat roundabout way to do this random sampling, and I was wondering if there was a simpler way that I wasn’t seeing. Any insight/help would be much appreciated!

Note: If I do go with the method I describe above, I’m planning to generate these bounding boxes in advance so that I only have to generate one bounding box per face per model rather than re-generating them for every sample point.

Sounds interesting. You are looking for N random points ON a set of Breps?

Actually I’m looking for N points ON each Brep of a list of Breps, so the problem can really be reduced to finding N points ON a single Brep. I just now noticed that BrepFace inherits from Surface which has an Evaluate() method which can take in a uv location, so I think that may solve my problem. I’m currently trying to implement it to make sure it behaves well.

2+4 should consider the face
You “lose” some points on the edge by the meshing but the calculation should be fast.

Thanks for the recommendation! I’m currently doing something similar, but I’ve noticed a couple of hiccups that make things much worse.

Here’s an image of what I get with my current setup on a simple object I made with a Boolean Union of two boxes (note that here I don’t include the area weighting as I want to see the effects on the individual faces, instead I just generate 100 points per face): 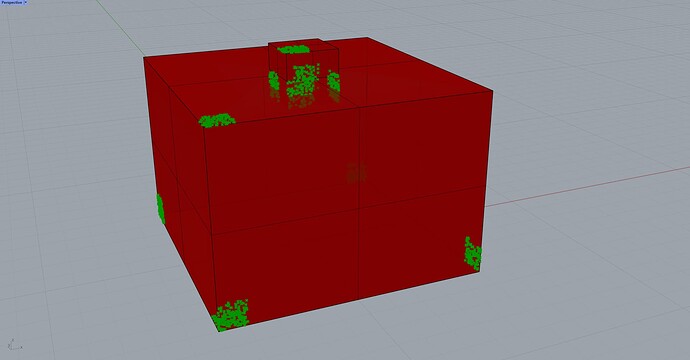 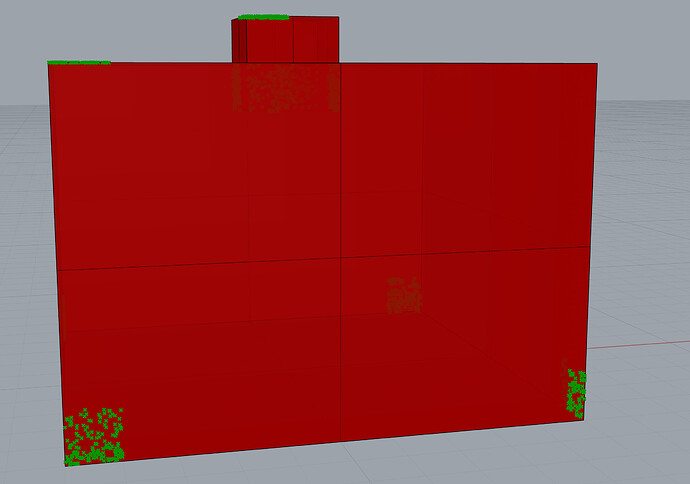 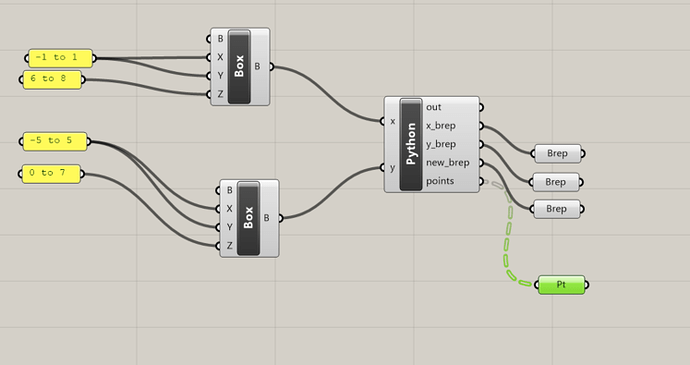 The code in the Python Node:

Problem 1: The Evaluate() call does not use a UV parameterization that accounts for the trimmed faces, and so it will potentially generate points on trimmed parts of the faces. This can be seen in the smaller vertical faces at the top of the object in the figures above. Solution: Add an IsPointOnFace() check as stated in OP and scrap points that fail. Note that I set a finite number of attempts to avoid infinite looping, and so the reason the upper faces still generate incorrect points in the figures above is because they max out the number of attempts. The following is a picture of the results with an increased domain size: 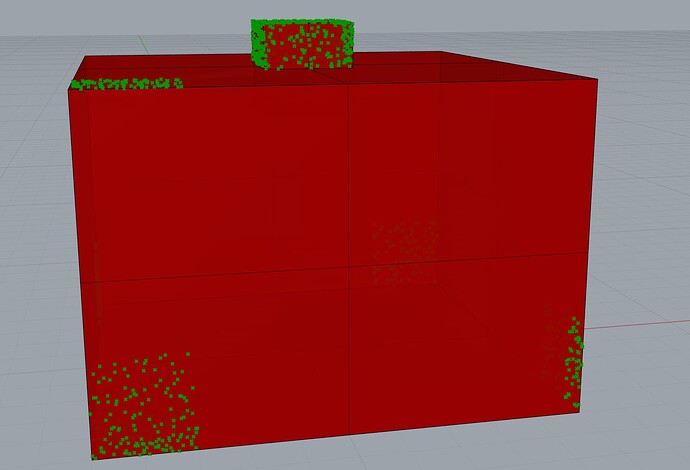 Problem 2: UV domain for the faces doesn’t seem to be [0,1]^2 as I would’ve expected; it appears to be in real-world coordinates. As far as I can tell, this will also mess up the mesh approach you describe, as I would assume the UV coordinates of the face mesh will be in [0,1]^2.

I can solve this second problem by baking in some assumptions about the kinds of objects I’m generating (they are all created with Boolean Operations on axis-aligned boxes, so I can simply create a world-aligned bounding box and set the scale of the domain to the size of the bounding box), but I’d like to avoid that if possible so that it is easier for me to use a more general class of objects later.

EDIT: I found the method PointAt() inherited from Surface that avoids me having to use the StrongBox parameters that Evaluate() requires, so I’ve now swapped to that one.

Here is a first implementation of my approach:

The basic trick is to compute random points on the UV space of the corresponding mesh and evaluate the BrepFace for these points. This should avoid IsPointOnFace tests.