Continuing the discussion from Grasshopper 2:

In the end it’s mostly a cumulative effect. I ran against more and more performance walls and one major job at the end of august this year made it clear that if I want to follow this line of work further, I need much more “headroom” in what I can handle. At one point during that job I had a Rhino file that was over a gigabyte of baked GH mesh data. Rhino took ages to save and load it, chocked on displaying it and bluescreened on rendering.
I had to convince my customer to take a different approach.
It worked out in the end but afterwards it became clear that this isn’t sustainable.

I looked at the Shortest Walk code myself but it was a bit over my head. I think introducing ways to guide the directions would be extremely useful. If you check these: https://www.screendream.de/design/life-love/ you can see that it would be very nice to have something like guiding splines or weights to be able to define paths that don’t cling to the borders like in the “LIFE” letters but keep to the centre more.

And just to make that clear: I totally love GH and your plugin saw a lot of use here. It’s really awesome work and got me going in this whole direction. I know that version 2 will have multithreading and that alone should solve a lot of problems. If things don’t absolutely have to be baked, that will also help.

@Thomas_Helzle do you have a small sample of the definition that you can make public, where I can test and see where the add-on slows down? Also, if you could make a small scheme of which parameters besides Euclidean distance would help you, then I can consider what to add!

I’m a bit busy ATM but I’ll try to create something for you that shows what I think would be interesting to make the plugin more versatile. Basically it’s about “directability” - having ways to tell the paths that they should follow a certain path or direction as long as possible.
This is an example from Houdinis “shortest path” with custom path costs:

DirectedGrowth2.jpg1920×1280 393 KB
You can see how the paths try to stay in the centre and only turn towards their individual endpoint when they “have to”.
Most natural forms are like that and it generates a much more interesting variety of patterns.
So I could imagine defining a spline curve as a “goal” or “attractor” that the shortest path tries to follow. Attractor behaviour would be good, so the paths don’t follow the guide too absolutely(or at least not if I don’t want them to).

Like you pointed out in the other thread, I’m not even sure if Shortest Walk is the performance hog or if GH simply has a hard time with lots of points no matter what tools you use. I worked with very detailed grids and the system became extremely slow.
Does the plugin use multithreading internally? In theory it should be possible to search each path in it’s own thread?

Cheeers and thanks again for your feedback!

The real longer and more difficult part is not multi-threading the finding of a path, but rather constructing the graph from the bunch of lines only once, and in a fast way. Pathfinding should not be very difficult after that. Several different pathfinders can run at the same time.

Another question eventually for later. Should path length always be positive? Or could there be ‘sinks’/shortcuts that have negative or 0 lengths?

Well, lengths as such should be positive and “real” (the output value I mean), but with path cost I could imagine allowing all kinds of values - this is a different thing in Houdini and can be output per path as well as per point.
They also offer turning cost (which I found quite interesting) and a mode where the actual path length doesn’t come into it at all…
Here are the three interface tabs: 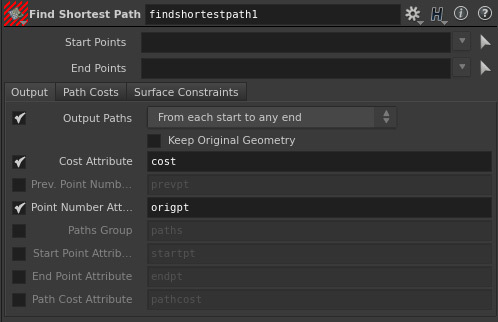 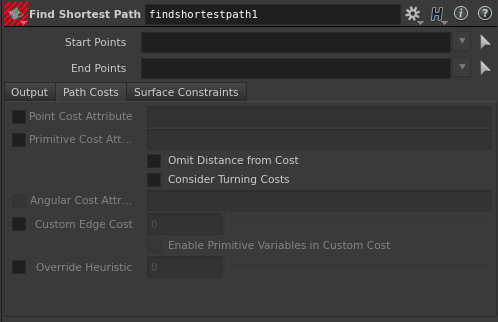 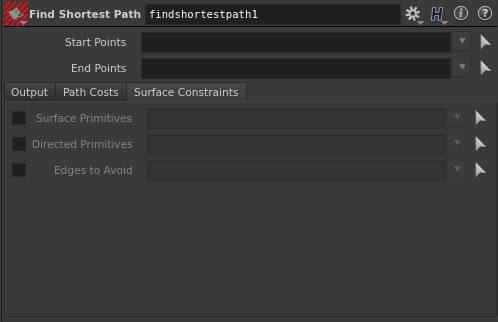 The first can’t be reproduced in GH - every point or line can have resulting values assigned to attributes that you can use later in the graph (so you don’t fiddle with lists and order but instead each entity can hold it’s own information).
The second deals with different costs, for points, primitives (~lines in GH), then turning and angular costs (can be per point as well). etc.
The third tab allows to restrict the path to certain objects, uni-directional primitives and edges to avoid. This is done by entering group names one assigned beforehand.

While this is very flexible, I could imagine a more artist-friendly way, where one deals not with such abstract values but like I said with for instance a spline curve which the paths try to stay close to (with a custom falloff) or something like that. I don’t know the algorithm well enough to offer good suggestions how it could be done.

Cheers and thanks for looking into it!