I posted this question on Grasshopper3d and David Rutten suggested I post over here.

I’m interested on whether it is possible to use on a server. Imagine a command like this.

Has anyone else worked on a workflow like this? Ideally this would run on a linux box - but I’m guessing that is a non-starter. Are there better tools for this I don’t know about? Also what are the licensing requirements for this? Thanks!

Jeff, did you make any progress with this? If so, what are your experiences?

Same problem, does Rhino has API for modeling by shell command/script?

Speckle by @idid might be just the thing here.

Hi there isn’t Rhino.Compute the answer here? I’ve just cloned the GitHub repo and built the app, but Im not sure if that’s gonna enable me to run an existing .gh file on a server like I thought. The commands it can handle are maybe just RhinoCommon and I really don’t want to translate an existing .gh script to it…

Or am I wrong about what Rhino.Compute is?

Check out the appserver project for using compute with grasshopper definitions 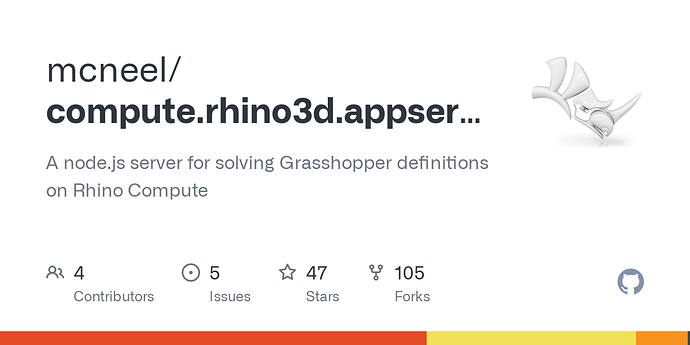 A workshop video on this technology can be found at

This past few months we have rolled out some projects that allow Rhino/Grasshopper geometry and our geometry engine to be accessed from almost anywhere. Here is a presentation by Steve Baer presenting how our technologies can be used to create web applications. The first 20 minutes is the overview and the rest is a workshop digging into the code. This ties together these 3 projects: Rhino Compute - online accessible geometry calculator Rhino3DM.js - JavaScript library to acces…

The last message in the thread before your answer is older than Rhino.Compute. Just saying