When I unzip the MSI file for Weaverbird, the files are coming through without extensions. Which files do I need to rename add for the plugin to work? Here’s a picture of what I’m getting from the download: 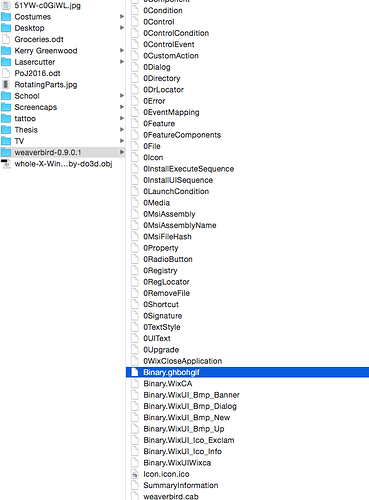 @sixpence – You can follow the instructions on this page: http://www.grasshopper3d.com/group/weaverbird/forum/topics/weaverbird-for-the-mac

Hi guys! Does anyone know if Karamba3d works on the mac?

if Karamba3d works on the mac?

From what I see, no. The installer is an .msi - microsoft installer file and it costs so you are better contacting the developer and see if they plan on writing a mac version.

Hi guys! Does anyone know if Karamba3d works on the mac?

Our most recent tests - please see the spreadsheet linked from this thread for more info - show that Karamba’s .NET plugin is trying to P/Invoke into a native DLL and it can’t find it. This could be an easy fix, it could be more complicated. @will was the last person to take a look…regardless, we’d be happy to work with the developers to help fix this issue if possible.

Hi everybody! Does anyone know if Ladybug works? it starts but rhino crash when i use Ladybug components…

To my knowledge, LadyBug has not been tested yet (until now). What errors, if any, do you get?

To my knowledge, LadyBug has not been tested yet (until now). What errors, if any, do you get?

I tried some components, (after setting of default folder in LadyBug component) like “LadyBug_SunPath”…grasshopper and rhino crash without errors…just crash…

…sorry, i changed the default folder path and now the same components works…

Hi guys! Thanks for making Rhino and Grasshopper availlble on mac!

I’m trying to use Hoopsnake and it seems to be loading fine. I’m also able to click “Step” multiple times, but whenever I click “Loop” or “Auto start loop” or if I double click the component itself, Rhino crashes.
I tested the same script on Rhino on Windows and it works.

Any idea if there is a simple solution for that? or suggestions for other loop components that would work on Rhino for mac? (tried Anemone but it makes Grasshopper crash on startup)

Would someone be able to instruct on how to get Paneling Tools for Grasshopper Mac loaded, please?

Assuming might be possible based on its listing at - ExplicitHistory Component Compatibility Testing :

Paneling tools & Grasshopper are included in the WIP version of Rhino. They are not in the official release. For Paneling Tools there are no icons or menus, just from the command line, start typing PT and it will list Paneling tool commands. For grasshopper, just type grasshopper.

Have the Mac WIP and already use the Rhino PT commands as well as Grasshopper.

Looking for help installing the PT components inside Grasshopper Mac WIP, such as I and other have done with Kangaroo or Nudibranch, etc. It’s a manual process for now, when working.

As is implied, PT components may (manually) be possible here:
https://docs.google.com/spreadsheets/d/1g7tTWhjJBM6UJ5WDgq0E8Z7Rbj_KvJ3d5XP0ZoI9hJQ/pubhtml

Did I miss something?

Issue with PanellingTools for Grasshopper

PT-GH for the Mac works now.

I tried a plugin called “gHowl” at MacRhinoWIP and GH.
However, UDP communication did not go well and an image-like error occurred.
I also tried three versions of gHowl, but the latest _r 50 had no tabs.
Any other person who tried gHowl?

I’m one of the gHowl devs. It doesn’t work on gh for Mac. No timeline has been set, nor have I looked too deeply at why it doesn’t work.

Right, that looks like https://mcneel.myjetbrains.com/youtrack/issue/RH-36565 which is why (at least partly) I think I might have originally filed that issue!