Please help me to understand how tangent works in this case

Tangent Question.gh (8.9 KB)
Don’t get me wrong, I understand what tangent is, having done 3D CAD for decades now, but I’m not understanding the math here.

On many commands I see a tangent output, which consists of a point(s) of xyz coords. I’m trying to visualize how this tangent point is implemented mathematically to get results like I show here. I know it works because I’ve done it here, copied from an earlier model of mine, technique I must have learned from someone on here back then, but I’m not understanding how plugging in that tangent point translates to normal alignment as shown here, so I’m asking how.

You are interpreting a vector (tangent) as a point. Vectors and points have the same text format.

P.S. Three ways of getting frames at any point on a curve, all co-planar but different rotation:

P.P.S. The method you used (yellow group) interprets the point connected to its ‘Plane’ input as a World XY plane, the default for any point, and then Adjust Plane “Adjusts [the WorldXY] plane to match a new normal direction” (the tangent). 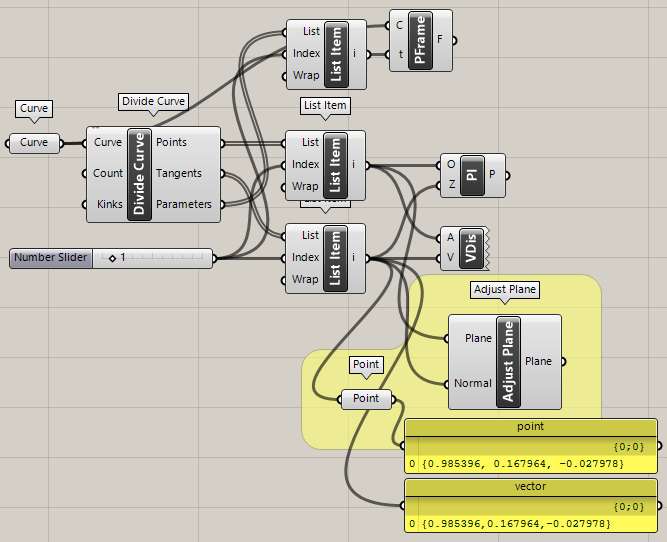 Thank you. Looking again I’m a bit surprised I didn’t see that if I constructed a line from origin to that point that it would be parallel to a line tangent from the end of the curve, but now I see it.