Nubie needs right term to search on for relative refernce

I am here from the world of AutoCAD - new to Rhino V6. How do I move things relative from where they started? In ACAD, I would pick my objects, select the start point, then use an “@” sign before the dims I wanted it to move…
IE @2.5,3,0 if I wanted it to move 2.5"X 3.0"Y and 0"Z
My searching on this forum has given me lots of deep / code related answers, but not the simple one I seek.

Please & thanks!
Other Bruce

Does this page help to find what you are looking for?:
http://docs.mcneel.com/rhino/5/help/en-us/user_interface/unit_systems.htm

I’d say the @ should work just like in ACAD

Thanks Willem - it does work! I had tried it and it failed… or perhaps I should say I failed
Thanks!

@bmosher Note that in addition to @ (included as an ACAD compatibility feature), the standard Rhino method is to use “r” in front of coordinates to indicate relative…

Note to powers that be @pascal - I have complained before about the ‘relative’ inefficiency of the search with the V6 online help. This is a typical case in point:

In the V5 chm Help, type “relative” as a search term. Bingo, it jumps right to the “relative coordinates” entry. 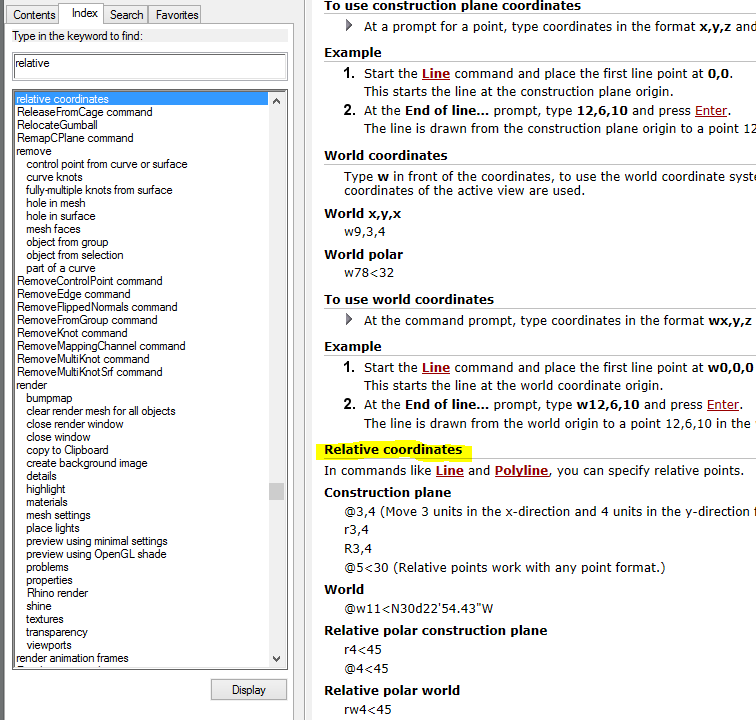 In the V6 online Help, typing “relative” gets me this: 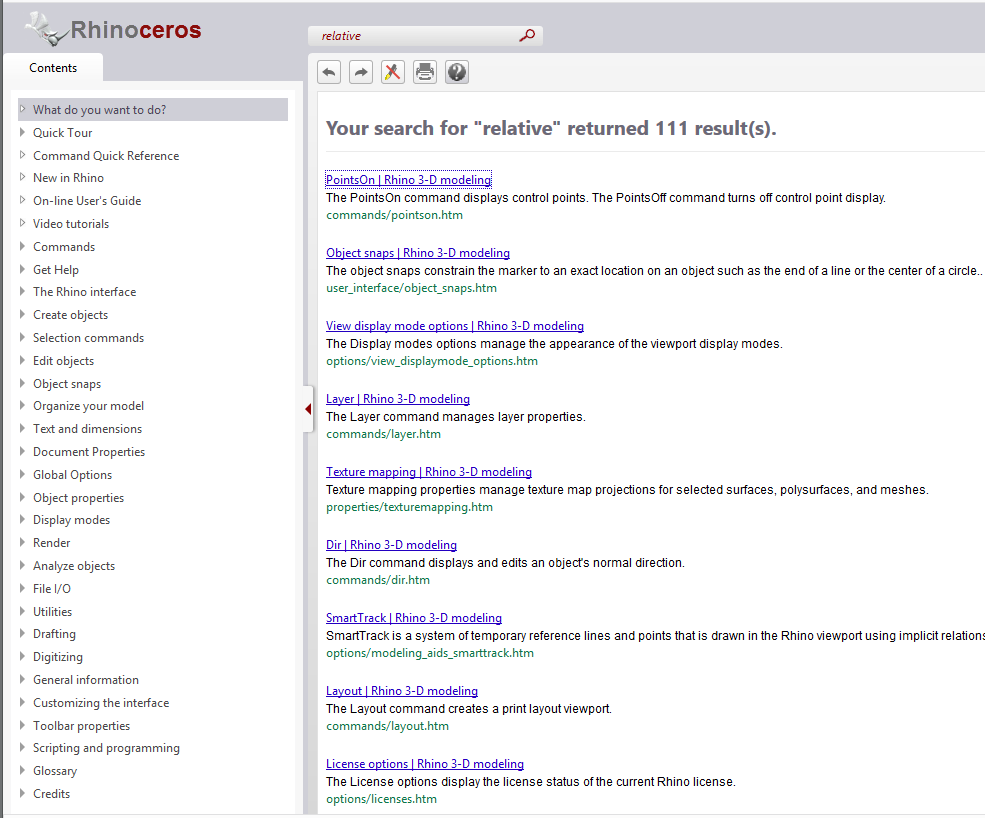 That’s not helpful at all. Typing “relative distance” narrows the entries to 43, but the one I need is still not on the first page of entries. Typing “relative coordinates” gets me an only slightly more useful page - the entry I need is the seventh on the list, and you would have to know it’s called “Accurate Modeling”. And even hitting that section, you have to scroll down like 3 pages to find the “relative coordinate” section.

It’s no wonder that Bruce ‘failed’ - it’s not actually he that failed, it’s the Rhino Help…

As I have been using the “r” method for a few months, its occurred to me that, in all the worlds I have drawn for (marine, cabinet, and now gates/ railings), I have never had use of world coordinates. Everything I have ever done has caused me to use relative references. I’m wondering how many of you use world coordinates for most of your work. Maybe it’s the simple nature of what I draw, but it seems to me that making ‘Relative’ the default would serve the most people,…

Rhino won’t even let you toggle it to make it the current sessions default.

Seems like this would be an easy fix (even if you have to code it to add the “r” for you when you hit enter), is it on a list anywhere?

[if you don’t understand this conversation; World Coordinates reference your drawings “0,0”, whereas Relative Coordinates (references) makes your “from” pick point the temporary 0-0 for the task. If you have an object anywhere on your screen & you want to move it 2" to the left you have to enter an “r” before the move distance, or it will move it 2" to the left of the drawing’s 0,0]

I’m wondering how many of you use world coordinates for most of your work.

Doing some mechanical and architectural, I use both.

That is not the only way to move things… I personally virtually never use “r” unless I need to move something a specific distance in two or three axes simultaneously. Otherwise I use either:

Oh, and by the way, if you make an alias or toolbar button with ! _Move _Pause 0 as a macro, that will work the same as using “r”.

You speak good ideas… move and copy are my main food groups.

So far I have found Gumball to be like a wadded up piece of tape that I can’t get off my fingers, so I keep it off. I also keep ortho off,…

With what you’ve shared, I accept responsibility for my situation & will play with your fine workarounds for my old school methods.

So far I have found Gumball to be like a wadded up piece of tape that I can’t get off my fingers, so I keep it off.

I have colleagues that feel the same way so I understand, I do occasionally turn it off when it gets in the way, but generally I can no longer live without it.

As you mentioned copying, with the Gumball it’s also child’s play, hit the Alt key while clicking on the arrow and enter a number, and you get a moved copy…

I would be waaaay slower in modelling if there was no Gumball and I just don’t get why people wouldn’t use it.

I also almost never use relative coordinates. I do the similar actions which Mitch describes.
Alternatively to his move workflow I prefer to Move, set a base point, drag mouse in correct direction and use tab key to lock that direction and then type the distance.

“So far I have found Gumball to be like a wadded up piece of tape that I can’t get off my fingers, so I keep it off. I also keep ortho off,…”

There’s a menu ball included in Gumball that I find handy but it’s turned off by default. Reset size to taste and you can set options without going down to the bottom of the screen. 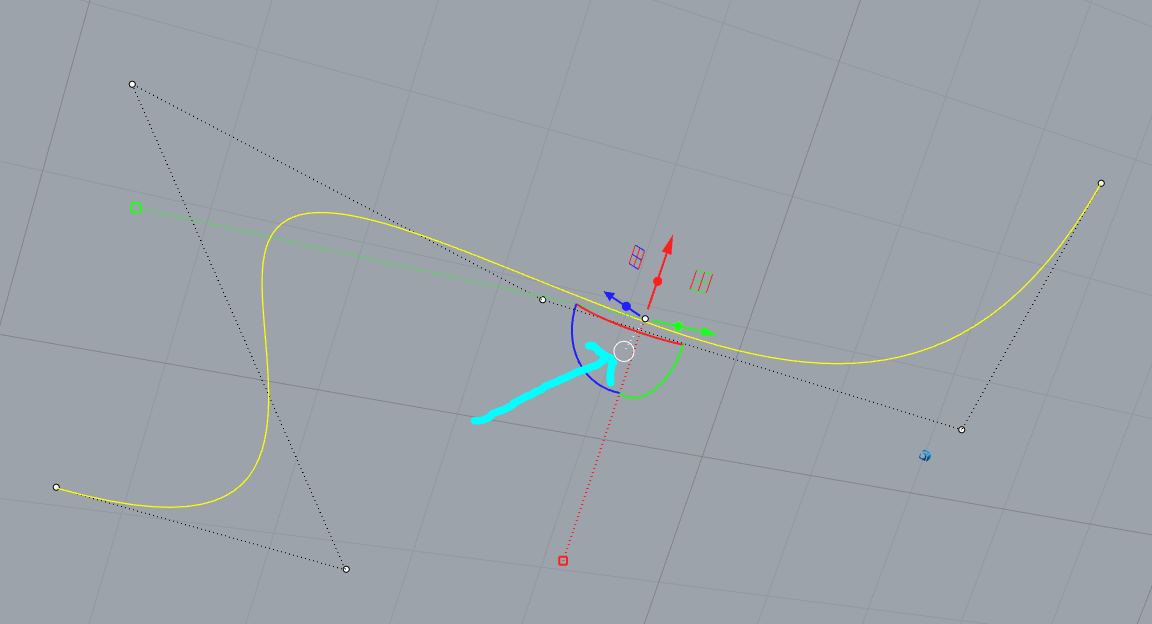 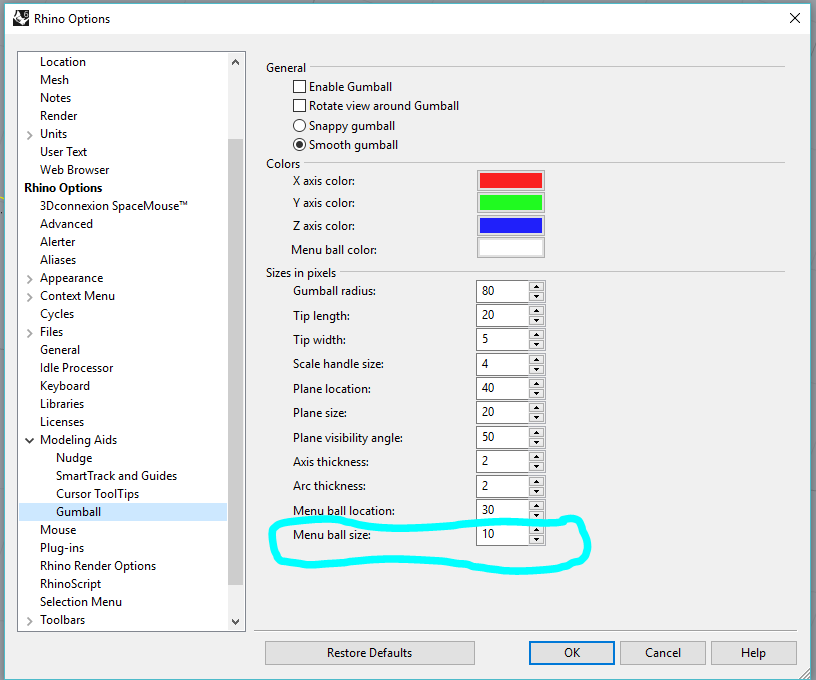 Start Move command
Select objects to be moved
Enter 0 (numeral zero) for first point. This sets the first point to the CPlane origin.
Enter distances to move in CPlane x and y directions, or in CPlane x, y and z directions.
Selected objects are moved by the input amounts in CPlane coordinates

Thank you one and all for your time & knowledge!
There are so many ways to skin a cat.
David, the first time I read your message it didn’t penetrate, fortunately it did today. THAT is a simple solution to my oldschool method.
My counterpart here was weened on Rhino & knows no other system. I blamed his youth & lack of other experience on his lust for GumBall. However, after your tutelage, I have been playing playing with it … and have begun to see it has more value than is obvious from my rocking chair.