I had understand that for this to work you need to put the view in parallel mode and not perspective. Still not working.

Then I thought it would only work with the pre established rhino isometric views. But still with those the lengths of my cube change.

Make2D is simply not making what its supposed to do, project the current view into 2D. It makes my 6cm sides measure 4.91 for no reason, and thats without even changing the isonometric from its default angle.

What if I want to look a little more from the left? How can I achive this? As far I as have been working, changing the angle, this menas, rotating the view after setting an isometric default makes my cube look like a rectangle.

Seems to work fine for me. I moved your model to the origin then ran Make2D. All the views measured 6cm on a side. See the attached file. Is that what you were after?

The model is fine, the make2ds are not. They do not measure 6cm on each side.Not on the isometric one.

In the test2.3dm model I uploaded, the 3 orthographic views all measure 6cm on a side. The isometric view does not since it is a projected view and not a “true” isometric like you would draw if you were doing it by hand. I’m not sure there’s a fix for this. AutoCAD works the same way. In its isometric view of a 6cm cube, the sides measure 4.75cm.

Thats the deal, its not working right for isometric. Even more, not only lengths are changed, but proportions too, this means the cube is no longer a cube.

There a fix, but its limited. You can set view, one of the default isometrics, then “zs” the objects (zoom centered) and make2d. Yet, for some strange reason, the sides now measure 4.9. Good thing is the proportions are conserved, so you can just scale to 6cm.

Still, its a limited fix because you cannot change the angle of the isometric for a different viewpoint that suits your model better.

Bump, any new updated on this matter? I have encountered the problem again today, Make2D not keeping lengths of model is quite frustrating.

Hi Shynn - The 3d distance between the ends of an edge of the cube is 6, the 2d distance in the parallel view is 4.9. Make2D uses the view…

Thanks for your reply Pascal. I am afraid I am not entirely understanding what you mean.

Check this simple example file out when you have the time. I added dimensions.

Hi Shynn - try this, in your file: 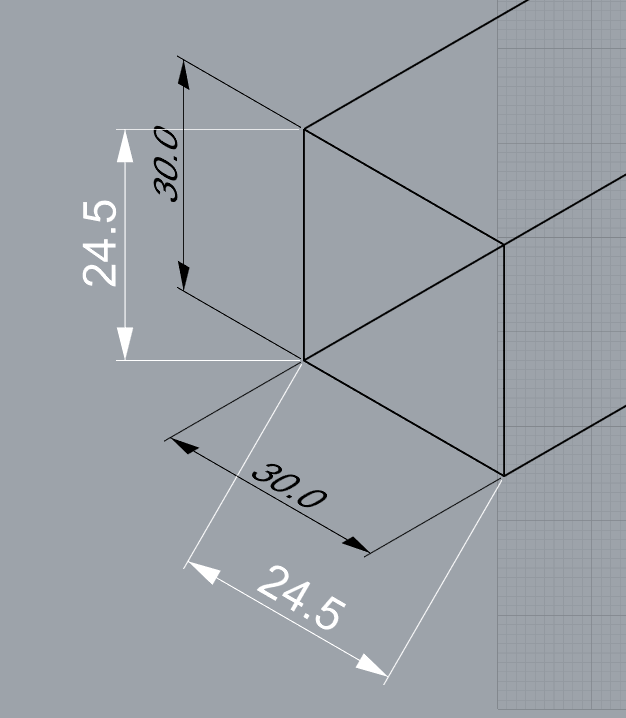 Just so you understand the terminology, ISOMETRIC refers ONLY to the 120° view you see when run the Isometric command. You cannot turn it a little to the left or right and have it remain isometric…

The term “isometric” comes from the Greek for “equal measure”, reflecting that the scale along each axis of the projection is the same (unlike some other forms of graphical projection).

An isometric view of an object can be obtained by choosing the viewing direction such that the angles between the projections of the x, y, and z axes are all the same, or 120°.

Isometric projection is a method for visually representing three-dimensional objects in two dimensions in technical and engineering drawings. It is an axonometric projection in which the three coordinate axes appear equally foreshortened and the angle between any two of them is 120 degrees. The term "isometric" comes from the Greek for "equal measure", reflecting that the scale along each axis of the projection is the same (unlike some other forms of graphical projection).

Note that it talks about the scale along the axes being equal, not necessarily the measurements relative to the original.

Tried it, it measure 24.5. But thats not the real value… why does this happen? Am I not using views and make2d correctly?

Let me explain my situation: I make a model, with exact measures. Then I make a drawing of it, Make2D. I need all measurements, sizes and distances to remain as originally modeled.

Having to scale each make2d for it to match originally modeled values does not seem right.

I was a drafter long before computer aided drafting came along.
One of the rules was that linear dimensions should NEVER be shown in any view or projection where they could not be measured and verified.

This means that dimensions should NEVER be shown in any perspective or indirect view.
Your 120º isometric view should not be dimensioned or show dimensions for the very reasons you seem to be confused. 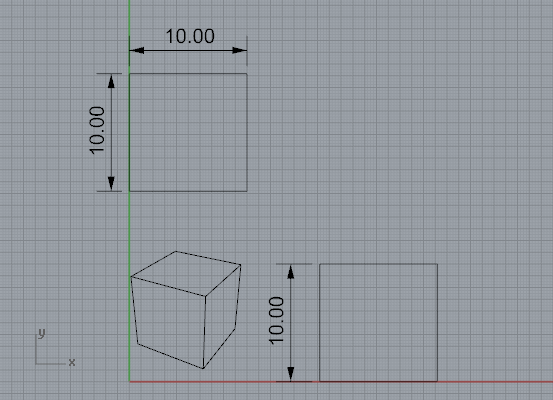 I thought parallel/isometric views were a way to maintain original dimensions and that “perspective” view should never be dimensioned as the figure gets deformed.

Good to know none of them should be used to express measurements. Thank you for the insight John.

In very early versions of Rhino, we did not display dimensions in the perspective view at all for this reason. Most users found it to be an issue so we gave in to the pressure.
I still regret the change but I understand it.

Only true of Isometric projections (and proportionally). Parallel projection views only guarantee… parallelism.

All 3D views are projections. That implies dimensional changes except under certain specified conditions. For example the ortho views have correct dimensions in view X and Y, but the view Z dimensions are all… zero.

When I was hand-drafting, isometric views could indeed match the dimensions of an orthographic view since we could measure the length of the line we were drawing. That 6x6x6 cube in your example could be drawn by hand with 6x6x6 sides in an isometric view. However, since Make2D uses a projected view, you’re out of luck as far as measuring goes.

While on dimensions subject. Can (mm) or ("), (’) and so forth be with the appropriate number in dimensions?
Thanks, Mark

Yes. That what named dimension styles are for.
Options > Annotation > Dimensions
You’ll see the names of the different default dimensions there.
You can make your own or edit the existing definitions.
They are stored in the 3DM file