We are finding that the STEP import in V6 is not thorough, and does not import objects that are there, and do import into V5. I can send an example to test. Just tell me where to send it.

This is a show stopper for us.

Hi Dan - I believe this is fixed here in the latest - send me the file and I’ll check it.

It’s on it’s way to your inbox.

I’m having the same issue, but V5 had a lot of trimming errors when importing so I had to take the scenic route via Step > Fusion360 > Iges > Rhino V6.

Pascal, when do you think that build with the fix be available? Thx

I made the fixes to this in SR2, which I think is already available as a release candidate.

Yes the SR2 release candidate is available at

We are hoping to ship the final SR2 tomorrow if all goes well.

Thanks Steve. I did try to install RC4 but it’s looking for the redistributables and for some reason, I can’t download them. I do have internet access. 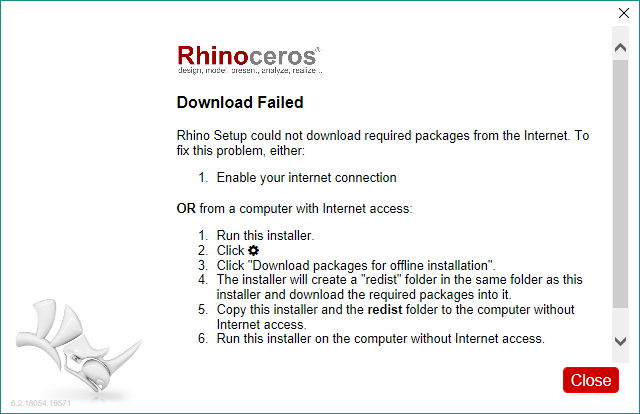 I went through this earlier today when installing V6 on an older system without internet access. I followed the instructions and was able to install. I’m not sure why I can’t do this on my computer. I will wait until the official release tomorrow and try again.

This is probably something for @brian to look into.

I found and downloaded the Microsoft Visual C++ 2017 Redistributable (x64). I ran it before running the SR2 installer, and the Rhino 6 SR2 RC4 installed without issue.

The STEP issue appears to be solved.

The redistributable bug is fixed in the current SR2, which is now officially released.